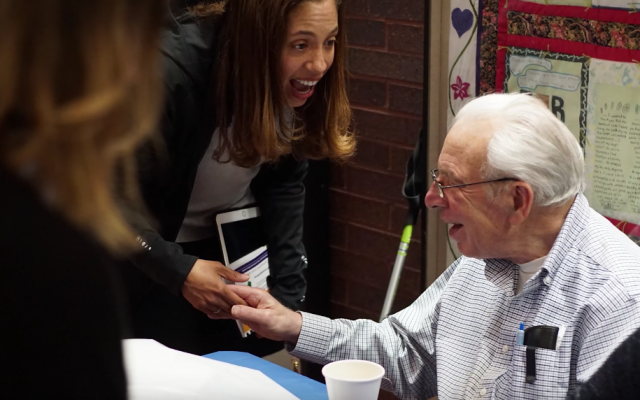 Author Elizabeth Marshall Thomas is quoted as saying, “I don’t mind aging — I’m glad to be aging. I’ll never die young.” That’s a variation of the “it’s better than the alternative” comment that many people make about the inevitability of growing older. Yet we know that it is not as simple as aging or growing older, it is not limited to gray hair and wrinkles and outward signs. Often aging brings with it the challenges of illness, disability and changes in our physical or cognitive abilities that we can’t control, that seem, often, to “come out of nowhere.”

We see that often with the many individuals we work with who have a diagnosis of Parkinson’s disease. They often recount the day that they experienced a single tremor in their hand or someone commented that they were not moving their arms equally as they walked. Others will talk about the decreasing volume of their speech as being a first indication, one that was often missed for a significant period of time before the diagnosis was actually made.

Like other chronic, progressively degenerative diseases, Parkinson’s is a very challenging disease to live with and manage. It is different in every individual (often called a “snowflake” disease) making it even more complex to diagnose and treat. And, like any other serious health issue, it is a “family diagnosis,” because the impact goes far beyond the patient themselves.

Over the last couple of years we have increased our knowledge about, and services for, individuals with Parkinson’s and their families. We have built strong and innovative programs that we believe are helping people to cope with and “fight back” against their disease. It’s not magic nor is it a cure but, in a small way, we are making a difference.

Last week, we had the opportunity to talk with a group of individuals with Parkinson’s who are part of a specialized day program we’ve developed. We offer a full day suite of services, ranging from the physical, like boxing and tai chi, to the emotional, like education and support. One of the things that struck me in this conversation was how critical attitude is and how much it determines the way you age, the way you manage your challenges, the way you confront these issues—like a diagnosis of Parkinson’s—that you cannot control.

It was clear to see that many of the people in this conversation were fighters, were those who make the proverbial “lemons out of lemonade.” It was also clear that others were struggling with the inevitable “why me” questions. One of the participants is a young man, still in his 60’s, with a myriad of medical problems. He is receiving hospice care and it is clear that there are not years ahead of him to live. He said that he does not understand why anyone would choose to be depressed. He said that “you can always look around and see someone who has it worse than you do.” He talked about situations in his own life, with people in his family, where he acknowledged the situation they were in and pointed out all the positives that they still had. It was not a “Pollyanna” attitude but rather a choice to recognize the difficult reality and look beyond it.

It sparked a conversation that carried on for the rest of our time together and beyond. The crux of it was the clear view of many of those present that adversity is a part of life, that loss of any sort — be it illness or loss of independence or death of those close to you — is the greatest challenge that we face. What matters, they said, is how you choose to deal with that loss. What matters is the recognition that you always have a choice, to be bitter or to be better. This was not, they said, about denial but rather about realism, accepting and looking beyond and forward.

The words of Elizabeth Marshall Thomas resonate here and go one step further as these individuals inspire us not to be just “glad to be aging” but actively choosing our approach to that inevitable process.