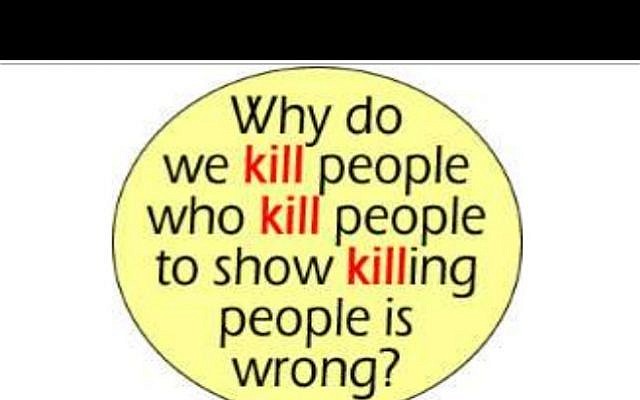 You probably have heard them too, Right-wing US Jews and Gentiles who defend Capital Punishment because it’s in the Torah. What more proof does a Monotheist need to approve of the death penalty?

Comes Pope Francis and he declares taking a life for a life outside of Roman Catholic Halachah. What a heathen, no? Well, not so quick, please.

The Sages warn us not to use the Torah to further our goals (Saying of the Fathers (which is Mishnah, the forerunner to the Talmud) 4:7). This is so deep! The Torah comes to change us. It is not a tool by which we effectuate change to our liking.

The Sages had a very deep understanding of Scripture. Every sentence, word, letter, unwritten vowel marking has endlessly deep value and meaning. Just reading the words out of the Sages’ context, is a violation of the elevated holy text itself.

(You dislike the way the Sages took it? Well, that’s too bad because the same Sages delivered to us unanimously the very words and punctuation of Scripture. How could you go by their meticulous delivery but disavow their careful reading? Either you consider their voice worthless (and in one go, reject all they brought to us) or you must be willing to read Scripture in context – the context they provided. That’s called integrity. The opposite of pragmatism: just (ab)using things the way they suit you.)

The Sages clearly teach that the death penalty had to be administered under such stringent conditions that it was almost impossible to get to a conviction, especially if the suspect would not cooperate. The Sages called a holy rabbinic court that would convict someone to death more often than once in seven years a bunch of murderers, no less! And there is an opinion there that they would be assassins if they convicted more frequently than once in 70 years – which is once in a lifetime.

But why does the Torah so often call crimes capital if punishment is almost impossible to be effectuated? Let me give you a number of answers.

Research shows that almost never, perpetrators considered the gravity of punishment before committing a crime. Either they assumed completely naively that they will certainly escape detection or conviction or they didn’t even think about consequences before they did something really bad. The Sages tell us why people do things that are really terrible. Not because they are bad but rather: in a cloud of folly. If one would think straight for a moment, one would not commit evil. In other words: punishment does not deter – one’s brain is switched off.

In the US, prisoners convicted to death are on “death row” often for decades. Their successful appeal depends on money and luck – and often the frivolous judgment of one politician. This is so below the carefulness that Torah’s capital punishment demands. Torah convicts are treated with the utmost respect. They are pressured to repent before death so that they will have a good afterlife. (Forget about revenge.) They are executed immediately, so that they don’t suffer too long over their impending death.

Most of them are Afro-American men – the effect of racism stares you in the face. (Only racists would hold that Black USers are inherently more murderous.) How could one rime racism with the messages of the Torah?!

With the above knowledge, there is no Biblical permission now to administer the death penalty.

If anything, it teaches that life is cheap – and its proponents revengeful. If one wants to teach the sanctity of life, a murderer gets to live with his crime and enough time to start regretting and feeling that s/he needs to make up and pay for it the rest of his life and it still won’t be enough.

Punishment is good in that it gives a clear message that we as society disprove strongly about certain behavior. It can also cleanse the perpetrators – s/he pays for their crime and after that should be allowed to be a better person and have all profit from that. (In The Netherlands, endless incarceration is also almost unheard of as it reasons that rehabilitation when possible should be done – except in exceptional cases of really dangerous criminals.) To kill heinous people is not constructive. It would help to let them teach about their repentance, or show everyone how almost impossible it is to come back from murder.

I won’t say anything bad to family members of people murdered who demand the death penalty. Which doesn’t mean that I should agree with them. I hope to never be in their place.  It’s not on my path to condemn them. But I won’t agree.

In general, we must stop (ab)using the Torah to defend the indefensible.

We still should stop a would-be murderer “dead” in his tracks and kill him if that’s the only way to prevent the slaying. But once a murder is done, let’s not make matters even worse. Two wrongs don’t make a right.

Get the integrity to admit if you were wrong. Yom Kippur is coming. That’s when all our lives hang in the balance. Do you want to strengthen the value of human life? Choose life and repent. Shanova umetuka!

Earlier, I blogged: 15 reasons why Israel should not have the death penalty for terrorists, ‘Thou Shalt Not Murder’ and the Jews and last but not least: Bill Cosby’s conviction and the dichotomy of Good and Evil people.