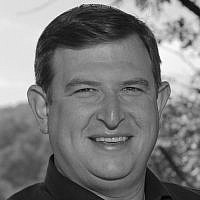 The Blogs
Loren Sykes
Apply for a Blog
Advertisement
Please note that the posts on The Blogs are contributed by third parties. The opinions, facts and any media content in them are presented solely by the authors, and neither The Times of Israel nor its partners assume any responsibility for them. Please contact us in case of abuse. In case of abuse,
Report this post.

On days like Friday, I want to lash out in anger…

At Yishai Schlissel who stabbed six people, wounding five and murdering 16 year-old Shira Banki at Jerusalem’s Gay Pride March. Given his apparent desire to return to biblical Judaism, I want him to get biblical punishment.

At our own terrorists who torched the home of the Dawabshe family, who burned an infant to death and severely burned the rest of the family while they were asleep.  I want Israel to apply the literal understanding of “eye for an eye” for punishment.

At those who threaten the life of our President, Reuven “Ruvi” Rivlin for having the courage to demand equality for all our citizens, Jew and Arab, regardless of religion, gender or sexual orientation. I want online inciters and anonymous posters censored from all social media sites and publicly shamed for their hatred and cowardice.

At those rabbis, “teachers” and politicians who incite violence with populist harangues and perversions of our tradition. I want them punished in biblical fashion.

On days like Shabbat, I hope for a small amount of comfort.

I find some comfort in a teaching of the Netivot Shalom. Rabbi Shalom Noah Berezovsky writes that the Shma, v’Ahavta and Ten Commandments are included in Shabbat Nahamu’s Torah reading to remind us that after the darkest moments in our personal and national lives, we need to recommit to the core values of Torah that are dependent on the heart, core values like demonstrating love of God by loving humanity and embodying the Ten Commandments.

Acting on these values demands…

A return to loving humanity, especially the “other,” as an act of loving God;

An end to racism and homophobia, demonization and extremism, hatred and violence;

A turn away from fundamentalism and literalism and a return to moderation and interpretation; and

An end to the incitement by leaders of every kind.

On days like Sunday, common sense and rationality return.

I remember that capital punishment won’t bring Shira Banki back to life and that it has not nor will it ever serve as a deterrent to fundamentalist terror. I remember how fortunate we are to live dynamic, evolving Judaism that values nuance and interpretation. I remember the need to be responsible for what I teach, the language I choose when teaching and posting online and the words I choose when posting. Finally, I remember that moderation is a reflection of The Divine, the Golden Path, as Maimonides teaches. I have to act, write and speak with moderation and do so publicly. Extremism doesn’t always have to beat out moderation. Silent moderation, however, always gives screaming extremism a victory.

A ray of light fought through the heat, smoke and gloom of the past few days. Israelis rallied across the country to insist on an end to racism, homophobia and extremism. President Rivlin demanded a national wake-up call to end the descent into darkness, hatred, racism and incitement. Our government arrested Jewish extremists and increased support for police and military investigations and actions against our own terror groups.

To ensure the victory of good over evil, however, we must answer President Rivlin’s call to rededicate ourselves to the core values of our country and our tradition: to act like the “light unto the nations” we aspire to be and to strengthen the fabric of our Jewish and democratic state. From finding spoken Arabic classes to “person-to-person” dialogue groups to increasing my involvement in municipal politics, I search for ways to contribute to the victory of ahavat chinam over sinat chinam.

To achieve this victory, let us take to the streets together – Jews and Arabs, right and left, gay and straight, secular and religious, dati “lite” and haredi. Let’s march together from Liberty Bell Park to The Knesset since homogenous demonstrations are insufficient. Let us choose a a public demonstration and not be satisfied with an underground effort.  Let us be tens of thousands in each city, not a few hundred and not the usual suspects. And let’s have concrete actions plans on the personal, municipal and national level in place and launched the day AFTER the demonstrations rather than just being satisfied by the fact that we marched together.

Descent into darkness, hatred and violence happens in a second. The ascent to light takes far longer. The dangers within our society – de-legitimization, incitement, brutality and bloodshed – are far more likely to bring about our undoing than are external threats, serious though they are. Marching together, city by city, and then implementing plans of action to encounter and support the “other”  will hasten light, peace, and redemption for the State of Israel and all our citizens.

Then, and only then, will we truly be free people in our land.

About the Author
Loren is a new Israeli Citizen and a rabbi. He lives with his wife and their two daughters in the Talpiyot neighborhood of Jerusalem. Their son attends college in the US. Loren was the director of several Jewish overnight camps including serving as the founding director of Camp Ramah Darom and Camp Yofi: Family Camp for Jewish Families with Children with Autism.
Related Topics
Related Posts
Comments