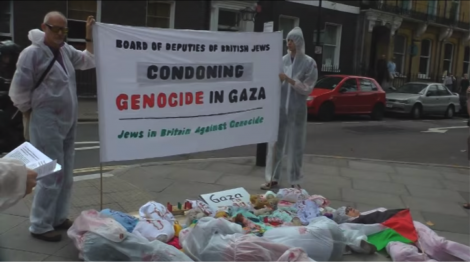 [VIDEO SCREENSHOT] Far-Left British Jews accuse the Board of Deputies of condoning “genocide” in Gaza, August 2014

The Basel Conference of 1897 was nearly held in Munich. The organisers had preferred to hold the First Zionist Congress there for the superior kosher restaurants. But the Munich Jewish community refused to play host: it denied the existence of a Jewish Problem that might need solving through Zionism, but protested that such troublemaking would surely provoke one. Within fifty years, the tragedy of this decision had become clear, as the Jews of Munich were devoured by the German war machine – and the survivors fled to the safe haven established by the guests of the very conference that they had previously spurned.

It was never a foregone conclusion that Zionism would emerge as the most popular answer among Jews for the Jewish Question, that age-old debate about the rightful status of Jews in society. Walking through Warsaw’s Jewish Cemetery, one gains a flavour of the extraordinary gamut of ideas proposed by Jews for their own emancipation. Some preferred assimilation into host societies. Others, notably the Netziv, embraced religion more closely and established yeshivot. I.L. Peretz, pioneered secular Yiddish culture, and L.L. Zamenhoff hoped that the flourishing of an international language, Esperanto, would eliminate national divides and prejudices. By far the most popular answer was Bundism, the Jewish contingent of the international workers’ movement.

Zionism, however, emerged victorious as the only answer capable of ensuring the survival of Jews as Jews. The others failed miserably: some disillusioned Marxists who left Mandatory Palestine for the USSR were gobbled by the gulags. Only the self-determination of the Jewish people in the Land of Israel — the creation of a save haven — ever succeeded in ensuring the survival and prosperity of a Jewish community under threat from hostile forces. No wonder that the vast majority of the Jews in the world are Zionists: the theory has proven itself.

This fact explains why anti-Zionism — rejection of the existence of Israel, not criticism of government policy — is inherently anti-Semitic. Anti-Zionists reject the preferred answer preferred of most Jews, but also don’t care much for solving the question – at least not in a way that takes account of Jews’ hopes and aspirations. They are content to expose Jews to dangers and risks against which they cannot provide assurances, indifferent towards the fate of the Jewish people in a world with no Israel. Edward Said hoped for a one-state solution in which Jews would be a minority, despite admitting that he could not be sure of their safety: “the fate of the Jews” in an Arab Palestine worried him “a great deal”. It is difficult to believe that this concern for Jewish wellbeing is genuine if anti-Zionists seek to impose a solution that most Jews fear.

But Jews too can be anti-Zionists. Jews excel in many fields, and Israel-bashing is no exception. The Neturei Karta cult appears at virtually every anti-Israel demonstration in the world, out of a conviction that the Jews should not have a state before the coming of the Messiah. There is no shortage of Jewish far-Left radicals who endorse the boycott movement or rabble-rouse at anti-Israel demonstrations.

So are these anti-Zionist Jews anti-Semites too? There is certainly no logical reason why a person cannot be prejudiced against a group into which he was born. It is certainly possible to be complicit in one’s own oppression: women can inculcate their daughters with repressive gender norms; Malcolm X used the trope of the ‘house Negro’ to explain the reality of acquiescence towards oppressive power structures. Gordon Maloney, the Jewish president of the Scottish National Union of Students, addresses an anti-Israel rally in Edinburgh

But it would be a folly to label Jewish anti-Zionists as anti-Semites. In rejecting Zionism, they repudiate a specific answer to the Jewish Question. But unlike their gentile counterparts, they are not indifferent to the fate of the Jewish people: they too would suffer the consequences of Jew-hatred in a world with no safe haven. Unlike gentile anti-Zionists, ready to subject hapless third-parties to the risks of their own ideological mission, Jewish anti-Zionists would at least pay some personal price for their own miscalculations (Diaspora anti-Zionists, admittedly, less than Israelis). Their opposition to Zionism might make them misguided or naïve – I would say useful idiots, or traitors – but it need not make them self-hating or prejudiced against their people.

Once one understands the place of Zionism on the historical palette of Jewish answers to the Jewish Question, one can rationalise its rejection by certain Jews: for them, the answer to Jewish emancipation lies in an affirmation of Diaspora identity – and nobody should belittle that aspiration. They are in many ways a relic of the Enlightenment-era hope — which went up in flames in the Holocaust — that anti-Semitism could be abolished by the integration of Jews as a religious minority in Western society, resolutely eschewing any claim to a national identity.

The problem arises when Jewish anti-Zionists try to impose their answer to the Jewish Question on people who believe this would spell disaster, by joining calls for the dissolution of the Jewish state. This recklessness arguably demonstrates a callous disregard for the wellbeing of Jews suffering the backlash of their incitement against the Jewish state – but calling it anti-Semitic helps serves no purpose.

There is an old Yiddish song that expresses this scorn for Zionism: “You want to take us to Jerusalem / so we can die as a nation / we’d rather stay in the Diaspora / and fight for our liberation”. Those who embrace the message of the anthem would to well to remember that the ‘Foolish Little Zionists’ belittled in the song survived, whereas those who sang it were wiped out. Some humility would be in order.