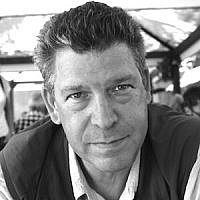 The Blogs
Joshua L. Schonfeld
Apply for a Blog
Please note that the posts on The Blogs are contributed by third parties. The opinions, facts and any media content in them are presented solely by the authors, and neither The Times of Israel nor its partners assume any responsibility for them. Please contact us in case of abuse. In case of abuse,
Report this post.

Lag B’omer is the date of my father’s, Gustav Schonfeld’s, yahrzeit.  It is now a decade since he has passed and since I have felt his warm embrace or heard his voice.  I have missed him so often these last 10 years!  There are so many times that I wanted to share various simchas (happy occasions), seek his advice or discuss books or current events.

As you may know from my previous posts, in the spring of 2011, just a few weeks before his passing, I was fortunate enough to lead the Passover Seders with my Dad by my side.  Somehow, I think that he knew time was short, and several weeks before the holiday, he insisted that it was the right moment for me take over this responsibility.

In Deuteronomy, HaShem (G-d) commands the Jewish people to count the seven weeks from the second night of Passover to the holiday of Shavuot.  This is called the counting of the Omer.  As a result of certain tragedies that befell the Jewish people during this time period (long ago), for those that observe this custom, it is also a time of semi-mourning.  As a result, certain celebrations (such as weddings) and other activities are avoided.   Some do not listen to live music or cut their hair and some men do not shave during this time of year.  The 33rd day of the Omer is a holiday (Lag B’omer) because the calamity is supposed to have abated on this day.

For me, however, Lag B’omer is also the date on the Hebrew calendar when my father left this earth.  It is now the date when I light a yahrzeit candle and go to shul (except last year) to recite Kaddish and the other prayers that have been recited by our people for thousands of years. I draw great comfort from these prayers.

As the child and grandchild of survivors of the Shoah, Passover, with its theme of liberation, has great significance for my family.  Over the last 10 years, the counting of the Omer has acquired a different meaning for me.  Each Passover, as we start this countdown, I think back to the Seders of Passover 2011, with my father beside me, and recognize that in 33 days it will be time for me to say Kaddish.  If I did not feel it so acutely beforehand, the Omer has, at some level, become a time of reflection for me.

It is especially poignant this year, as I just began a new position with a new company—striking out in a slightly different direction after over 30 years of being a lawyer (but remaining within the field of affordable housing). I would have so loved to have shared this news with my father, as he too undertook a significant challenge late in his career at Washington University in St. Louis (and truly succeeded).   At his funeral, one of the points I made was that I grew up wanting to be just like him, and that, in fact, that feeling had never disappeared.  On so many levels, he lived a meaningful life, giving back to the Jewish community as well as the broader world, as a physician and through his medical research.  And, in my own life, through my work in the Jewish community and affordable housing, I have attempted to follow in his footsteps.

Over the years, the intense pain and sadness and feelings of loss have melted and what remains are the warm memories of my Dad.  He was (and remains) my teacher, mentor and my friend.  He is still with me.  I feel his spirit and at times, in some ways, even his presence (and the spirits of my grandparents as well).  That too, is profoundly comforting.

As my father was uniquely aware and as he would often tell us after a setback: “Life will knock you down.  And when that happens, you must get up, dust yourself off and keep going.”  Knowing that is what he would have wanted, it is precisely what I have done in the decade since he left us.

As I commence this new chapter, I am quite hopeful.  Although I still miss him dearly, as I start this new journey, I know he is with me.  Every day, I carry his spirit and all that I learned from him.  Along with that, I carry the legacies of my father’s and grandparents’ connections to Israel, our heritage and the Jewish people—and I am inspired to ensure their continuation.

About the Author
Josh Schonfeld lives with his family in Potomac, Maryland. He is originally from St. Louis, Missouri. He has served as a board member for a number of Jewish communal organizations and is an active member of the community.
Related Topics
Related Posts
Comments