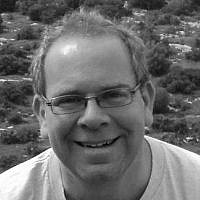 The Blogs
Elli Sacks
Apply for a Blog
Advertisement
Please note that the posts on The Blogs are contributed by third parties. The opinions, facts and any media content in them are presented solely by the authors, and neither The Times of Israel nor its partners assume any responsibility for them. Please contact us in case of abuse. In case of abuse,
Report this post. 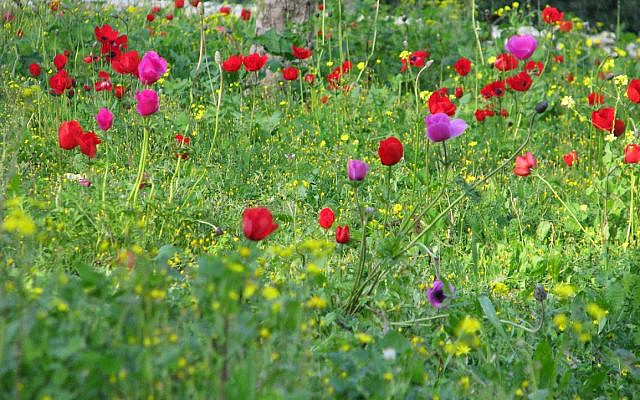 As an Israeli nature enthusiast and a student of the Hebrew Bible, every February I experience a double-shock to my senses and thoughts.

First, I cannot help being blown-away by the brazen proliferation of red flowers that so suddenly carpet the earth here – from the plains of the northern Negev to the hill country of the Galilee – setting the landscape ablaze. This is the late winter bloom of the crown anemone, known in Hebrew as the kalanit, in Arabic as shokikat al-Nu’aman and in Latin as Anemone coronaria. Much of my cellphone’s memory card is dominated each February by photos of this audacious flower.

The kalanit is not alone among Israel’s colorful wildflowers. Nature’s palate here includes the delicate pink of the cyclamens, deep indigo of the lupines, brazen gold of the chrysanthemums, the various hues of blue, purple and yellow irises, as well as hundreds of other species. But the flower that garners celebrity, attracting far-and-away the most Israelis and their paparazzi Nikons (or pelephones) is undoubtedly the kalanit.

This love affair with Israeli wildflowers figures prominently in Hebrew poetry and song, and in literature, as in life, the anemone seeks to dominate the landscape. One of the most recognizable classics of the Israeli songbook is “Kalaniyot”, a poem by Natan Alterman, set to music by Moshe Wilensky, and made famous by Israel’s first diva of song Shoshana Damari.

In song, the kalanit is a metaphor for the indelible love of one’s youth:

Though generations come and go unending
Each age must have its kalanit and song,
And happy is the man, through storms’ descending,
Whose kalanit has bloomed for him, but once.

While most Israelis are familiar with this song, few probably ponder – as do I every year – why the kalanit of modern song appears to be entirely absent from the Bible. It should be there, it needs to be there. This is the second shock that my mind cannot help confronting each February. Why is the kalanit missing from the sacred books that house our people’s collective consciousness?

There are over 100 species of plants mentioned in the Bible, and in the Song of Songs in particular, Israel’s loveliest flowers are presented as metaphors for the beauty of the royal Lover and his adoring Shulamite maiden.

Upon closer inspection, it appears that the kalanit flower quite possibly DOES appear in the Bible, though under a different name — Na’aman — and in an unexpected context: idolatory.

The prophet Isaiah was quite possibly talking about anemones in Chapter 17, verse 10 when he refers to Nitei Na’amanim.

Some background is required here. “Na’aman” means “darling” and is the Arabic epithet for Adonis, the Greek hero who was the mortal lover of Aphrodite. Before Islam came to dominate the Middle East, the pagan Adonis cult was widely practiced here, particularly in Syria and Lebanon. Each Midsummer, local women would plant a “Garden of Adonis” – winter seedlings planted in pots and then set out in the hot sun to sprout, flower, and then quickly wither. Devotees would then gather the shriveled petals and plant remains, float them out over the waters, and cry over the death of their beloved human-deity. After this cathartic festival, they would celebrate Adonis’ rebirth and rejuvenation, to be fulfilled in next year’s bloom.

To this day, the beloved Adonis is still recalled by the Arabs of the region who refer to the kalanit flower as shokikat al-Nu’aman  or “the wounds of Na’aman.” In fact, some linguists believe that the word “anemone” is a latinization of the tongue-twisting Hebrew “na’amanim.”

In light of this, we can now understand why Isaiah considered these na’amanim as objects of idolatry, and why they are shunned by the rest of the Bible. In Chapter 17, Isaiah criticizes the alliance between the Northern Israelite Kingdom and Syria, claiming that it will lead Israel to adopt the idolatrous practices of her northern neighbor (Isa. 17:10):

Because you have forgotten the God of your Salvation
And have not heeded the Rock of your Strength
Therefore, you will plant nitei na’amanim (Gardens of Adonis)
And sow vines of strange [gods].
In the day, your plants will flourish
And in the morning, your seedlings will come to blossom
But your harvest will be a dry mound of grief and desperate pain.

Today, it’s safe to say that there is no hint of paganism in our attraction to Israel’s wildflowers. But perhaps a little of that same primitive fascination is still with us. Though we’re far more apt to be snapping pictures of loved ones frolicking in scarlet fields than crying over Adonis’ demise, there may be a little of the cathartic carryover from pre-monotheistic days of old.

After all, these kalaniyot, which appear so suddenly and blaze ever so bright, also wither far too soon. The Aramaic name of the flower – kalanyata (B. Pesachim 35a) – stems from the root k.l.h. which means “to end” or “to die.” And so there remains a tinge of palpable sadness in our flower that resonates with a nation that has lost too many of its sons and daughters at too early an age.

As the poet Rachel Shapiro concludes her song K’mo Tsemach Bar (“Like a Wildflower”):

“I’ll be a shadow in your fields, a passing secret,
But for an hour;
Farewell my friends, I lived amongst you, not unlike
A wildflower.”

Take advantage of that hour this February and March. Go out into the fields, and love a wildflower.

This note is dedicated in loving memory of Sara Duker and Matt Eisenfeld z”l , who were killed in the #18 bus bombing in Jerusalem, 26 years ago on Feb. 25 1996. Matt and Sara, especially, loved wildflowers.

About the Author
Elli Sacks is a software product manager whose interests include writing musicals and translating poetry. A native New Yorker, he has lived in Modi'in with his family since 2000. In 2014, he began publishing his blog: "Poems of a Life Twice Planted: Hebrew Poetry in Lyrical Translation"
Related Topics
Related Posts
Comments