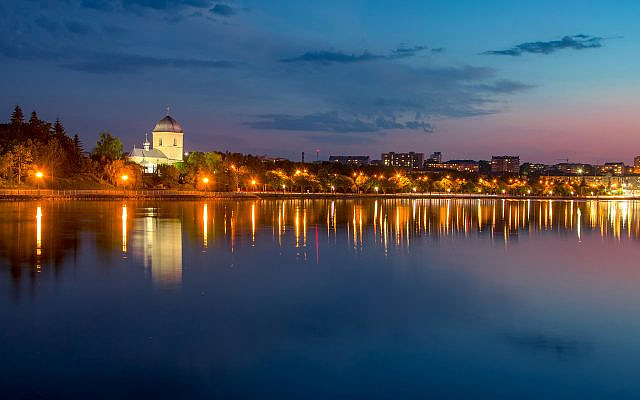 This Purim, I’m making my signature triangular whoopie pies in blue and yellow. I am, in a way, Ukrainian.

Ask a non-Russian speaking American Jew where their family comes from, and they’ll almost never say, Ukraine. Galicia, they’ll offer, or Poland. The Pale. Austria-Hungary. Maybe even Russia. But Ukraine? I distinctly recall that as a child when someone used the word ‘Ukrainian’ they were referring to people who had worked hand-in-glove with the Nazis. So, not our best buddies, as far as I understood.

Then, in 1995, my family decided to take a Roots Tour of sorts, to visit the cities our relatives had emigrated/escaped from. My father’s family is from Tarnopol (Ternopil), now in western Ukraine. My mother’s family is from Dnepropetrovsk (now Dnipro) in the east. When we arrived in Tarnopol, the first thing we noticed was how beautiful it was. At least from afar.

Ukraine still presented like it was behind the iron curtain. Our driver, who wore suit pants, a white shirt and flip flops, hair slicked back with some sort of bulletproof gel, had to maneuver on muddy unpaved roads, where we occasionally got mired and had to spend an hour or so pushing the van out of the muck. Sometimes we drove for miles, achingly slowly, behind an ancient horse and rickety buggy. There was nowhere to stop and buy food, or use a bathroom.

My family had brought a suitcase full of food from Israel, my cousins’ food came from the other homeland, Teaneck, NJ. We ate crackers, and endless slices of salami, my ancestors having owned a kosher sausage factory in Tarnopol before the war. We had brought dozens of the Israeli equivalent of Cup O’ Soup, and an immersion heater to boil water. Only we couldn’t get our hands on bottled water, and were cautioned against drinking from the tap this close to Chernobyl. On the rare occasion that we saw a fruit or vegetable, the vendor would insist it had come from Azerbaijan or some other far off place, even as we drove by orchards filled with the questionable nuclear enriched produce.

We drove for what seemed like endless miles past fields of sunflowers, so stubbornly and curiously optimistic against a backdrop of Soviet-era apartment blocks and toothless Babushkas in tattered housedresses. My father, his sister and their first cousin, the only children of their generation that remained of a family of dozens of aunts uncles and cousins, were giddy with excitement encountering the places that had until then existed in their imaginations alone. They stayed up late into the night regaling us with stories recalled from their childhood, of distant refugee relatives appearing at their Manhattan doorsteps, of life for my grandfather and his siblings, children of privilege and prominence in a society now evident only in its utter and complete erasure.

We laughed until the tears poured down our cheeks, telling tales that seemed at once more real and more impossible now that we were standing on the very soil that had birthed them. My cousin, newly married and strengthened in her Orthodoxy, periodically chastised us for speaking lashon hara, gossip. We were quiet only until we heard her door close, then went right back to giggling. And to speaking ill, and not so ill, of the dead. The murdered.

In Tarnopol, where my grandfather had grown up, there was a killing field that rivaled those more famous ones in its scope. When elderly residents asked our name, and we said it out loud, our very Americanness evident in each confident breath, the Ukranians hesitated. They knew that name. They knew our family. This we understood just in the extra beats they took to answer. Their eyes said – are you here to take your property back from us? Are you Nazi hunting?  Are you here to ruin us? You, with your expensive clothes and your soft hands and your straight teeth? What do we have even to give?

The town itself was incongruously gorgeous, built on the banks of a large blue lake. It had been rebuilt after the war, with a huge central square reminiscent of Warsaw, or Prague. But the stores were largely empty. I used my halting college Russian to ask, once again, for bottled water, and got handed more seltzer. What were the chances these women had ever heard of Cup O’Soup?

“For tea?” I raised my eyebrows expectantly, only to have them laugh at me. Water for tea comes from the faucet, as every idiot knows. And if it hadn’t had such a peculiar, putrid smell, maybe we would have chanced the radiation. So, we made noodles with bottled soda water, ate another slice of salami. We bought some bananas because we figured they couldn’t have survived the Ukrainian winters.

There was a single relative remaining in Ukraine, out of hundreds before the war. My great aunt’s sister lived in a tiny apartment, paint peeling, walls cracked. She had been a surgeon in WW1, and as such was owed a pension of nine dollars per month. She had water and electricity for a couple of hours a day. She put out snacks for us, and a few drinks, like your elderly relative on kibbutz would do. Even though she had survived, she was a ghost.

We arrived in Kyiv as Tisha B’Av approached. The fast felt easy in this surreal place, and I was glad for a respite from the cured meat. We made our way to Babi Yar, situated in the center of the city, where everyone would have known. There was no memorial, no special designated spot to direct our anger, our mourning. So, in the stubborn sunshine we sat on the grass, and sang through all of Eicha, the Book of Lamentations. The stories of Roman brutality felt so close I could have reached out and touched the soldiers. In sandals. In brown shirts and high boots.

We saw sparks of a new Jewish community on that trip as well. Kindergartens bursting with students, children of parents who just a few years before would have hidden their Judaism. And we ourselves felt relatively comfortable being who we were, even in such a complicated place.

Nowadays my family has discussions of whether a kippah can be worn safely when we’re on vacation in Paris, or in Amsterdam. Maybe best to just wear a baseball cap, my parents insist. And this country that is filled with the descendants of our mortal enemies, we are now told is the least antisemitic nation in central and eastern Europe, a glass half full designation if ever there was one.

On Purim, we turn our assumptions on their heads. Our enemies have the power to become our closest allies, and I suppose the opposite is true as welI. Like everyone else, I am watching the endless reports of bravery from Kyiv and beyond, and I am certain how it makes me feel. Blown away by the sacrifices Ukrainian people are willing to make, the resistance and the spirit in their fight. People who never knew my family. In a country that, nearly thirty years later, is nearly unrecognizable. Of course, this invasion is an unthinkable tragedy. It’s a film about the best and the worst of humanity, on full technicolor 24 hour CNN display.

All the while, though, there’s a tiny voice in my head, one I’m finding it hard to quiet. The voice remembers all of those stories, the ones we told late at night in our hotel rooms. The ones that had us laughing so hard that tears flowed, wishing we could have known all of those characters in our private family ghost stories. The voice says, in a gentle but insistent whisper, “why couldn’t you have been this brave for us?”