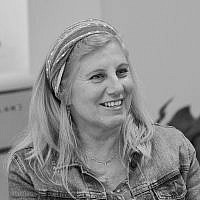 The Blogs
Michal Kohane
Apply for a Blog
Advertisement
Please note that the posts on The Blogs are contributed by third parties. The opinions, facts and any media content in them are presented solely by the authors, and neither The Times of Israel nor its partners assume any responsibility for them. Please contact us in case of abuse. In case of abuse,
Report this post.

When the 8th day of Pesach fell on Shabbat, something happened: the Torah reading in Israel, where there is no 8th day, proceeded to the Book of Leviticus, while those of us in “chutz-la’aretz” (outside of Israel) stayed one more day with the holiday. What this means is that during these weeks, we, outside of Israel, are reading a different Torah portion – one behind – those of us in Israel. This pattern will continue until the week before Shavuot, so that when we get to Sinai, to the Giving of the Law, we will be all back together.

This is not an unusual pattern , and occurs every few years, and yet, there must be no other days in the calendar, where the distance between “Israel” and “diaspora” is so great and the pain so acute.

Not only it is the time of counting the Omer, remembering the strife and sadness of long ago, with some placing an extra focus on the death of Rabbi Akiva’s students, but at the same time, it is Yom Ha’sho’a – Remembrance Day for the Holocaust and Bravery, Yom Hazikaron – Israel’s national Memorial Day for Soldiers and Terror Victims, and Yom Ha’atzma’ut, with the State of Israel celebrating its 70th anniversary.

Growing up in Israel, these days were shot straight to the vein, and in large doses. There is no escape, from the loud siren with everyone – everyone – standing still, to ceremonies everywhere – be it national locations or neighborhood memorials and school assemblies; there are special songs on the radio, which one learns to recognize as soon as you tune in, and neighbors talking in hushed voices. You don’t have to do anything to know what’s going on and be part of it.

And then you come to America. Or wherever. And it’s not “kaf-zayin b’nissan” or “hey b’iyar” but stam April whatever. Your radio plays the same giddy nonsense, your neighbors smile their usual, chat about the weather and wish you a wonderful day, and the flowers decide to burst out in joyful blooms. Unless you’re in the heart of a Jewish organization of one sort of another, which bothered to bring fiery shlichim who shove yellow stars and sad, faded, black framed photos along with streamers of blue and white and falafel at you, it’s still April whatever and no one cares.

And your heart breaks.

For years, I was the one with the stars and photos and streamers. And this year, for variety of reasons, I felt tired; tired of being “the program”, the “token Israeli” who insists on having a “tekes”, who shows (off?) how we mourn our loved ones (head bowed down diagonally ever so quietly, teary eyes blinking behind dark sunglasses, lips shut tight). This year, I felt a resentment, both towards the “Yom Hazikaron industry” (of which I am a dedicated consumer), and towards this being “the Israelis’ day”. By the end of the week, I’m exhausted, the heavy load of memory and celebration weighing down on my shoulders.

And so, this year, I am wondering:

At the establishment of the State of Israel, there were talks when to schedule the “new” national memorial days. Some said, we already have a national mourning day, known as “Tish’a Be’av”, the day we commemorate the destruction of not only the first but the second Temple as well as many other calamities. But others, whose pain was fresh and oozing with no comfort, wanted their own day. In a rush, the day before Yom Ha’atzma’ut was decided. We, the “young sabras”, built a whole ideology around it, about how we’re capable to handle the juggle between extreme sadness and indescribable joy.

But what if it was different??

Had Yom Hasho’a and Yom Hazikaron been in mid-summer, on an already established 2000 years old fast day, most likely, I would have not known anything about it, and maybe, no one would: The secular Israeli would never see it as it’s off the school year, and the Ultra-Orthodox, who observes the day, might ignore that modern aspect of it. But maybe, just maybe….. the reverse is also possible: the seculars would have had to learn about Tish’a Be’av, and the Ultra-Orthodox – appreciate the State of Israel as “resheet tzmichat ge’ulatenu” – the beginning of our redemption, an integral, long-awaited-for part of our religious, national, historical amazing everlasting tale of survival and triumph.

Perhaps the saddest aspect is that over the years, by establishing different mourning days, we separated our People, which now means, on Tisha Be’av some “crazies” fast and mourn for a faraway (and to many – irrelevant -) Temple of long ago, while others cry, alone, on Yom Hasho’a, and often others, on Yom Hazikaron. We divided ourselves twice: first, according to religiosity and then, according to geography. The geography piece is that outside of Israel and its still mostly beloved, appreciated and even admired defense force, national memorial days mean very little in other countries. In the U.S. it’s mostly bar-b-ques, picnics and great sales. There are ceremonies, and I thank those who invited and introduced me to those, but it is very different, as the “one-off” and not the norm. By creating the first separation, we also took those days away from (almost) everyone who is not in the Land, or directly connected. And then we stood there, ever so sad, not knowing why no one cares. Yet again.

Rav Benny Lau teaches about last week’s Torah portion (or two weeks ago, depending on where you are…), Metzora, where we read about (the mistranslated) “leprosy” that in order to “diagnose” leprosy, there are two aspects: the afflicted person, and the priest, one who is “seen” and was who “sees”. There are many conditions before determining one a “leper”, and thus “removed from the camp”. In a way, it is a dis-ease which relies on one person being honest and open about their hurt, and another, who can see through and understand what’s before him. True, in the Book of Leviticus, it is the job of the priest, but elsewhere (Exodus) were told that we are all a “kingdom of priests”. So what do we see? What is our responsibility in our own seeing? How do we see – and choose to see – our brethren? How do we create, in the words of Rav Avi Weiss, not uniformity but unity?

The separation has been painful but maybe it’s also an opportunity. May we find better ways to remember and celebrate, together.

About the Author
Currently a "toshevet chozeret" to Israel, Rabbanit Michal Kohane is a graduate of Yeshivat Maharat, teacher of Torah and Talmud in Israel and abroad, and chaplain in training. She holds several degrees in Jewish / Israel studies as well as a PsyD in organizational psychology, and has been a leader and educator for over 25 years. Michal’s first novel, Hachug ("Extracurricular") was published in Israel by Steimatzky, and her weekly, mostly Torah, blog can be found at www.miko284.com.
Related Topics
Related Posts
Comments