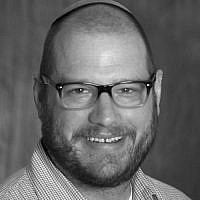 The Blogs
Jess Olson
Apply for a Blog
Please note that the posts on The Blogs are contributed by third parties. The opinions, facts and any media content in them are presented solely by the authors, and neither The Times of Israel nor its partners assume any responsibility for them. Please contact us in case of abuse. In case of abuse,
Report this post.

On Wednesday, January 6, 2021, the United States Capitol was occupied and violated by a right-wing mob explicitly intent on stopping the machinery of American democracy in order to install their tyrant.

Participants in this profanity have thus far been called a number of things, and the final terminology remains to be settled upon: protestors, a mob, insurrectionists, seditionists; and we must not forget their names to their supporters, who seem impervious to shame: patriots, martyrs, “true” Americans. Their actions have been called a riot and an attack on the one side, a rally and righteous occupation on the other.

But one word that has not yet, to my knowledge, been applied, one that emerged out of the modern Russian language in the late 19th century to describe scenes similar to what we witnessed in Washington DC in 2021: a pogrom.

On January 11, 2021, Yeshiva University’s podcast series Crisis and Hope: YU Voices will feature a discussion in recognition of the Dr. Martin Luther King, Jr. holiday a week later. For our topic, my colleagues and I chose a subject somewhat discordant with the normal focus of this day of service: the shared experience of racist and antisemitic violence at the hands of violently prejudiced societies. This experience has formed an important foundation of a shared Black and Jewish history.

While celebrating the work of Dr. King is usually done through service and a focus on change and progress that represent his legacy, we felt it was important to remember the violence that made his work necessary. Like the pairing of Yom Ha-zikaron with Yom Ha-atzmaut, a day of mourning and reflection with a day of redemption and joy, it seemed worthwhile to understand the darkness a bit better before turning to the light. Our guests will be two experts on popular, racist violence in two different settings: Professor Elissa Bemporad of CUNY, an expert in antisemitic violence in the Russian Empire and Soviet Union, and Professor Scott Ellsworth of the University of Michigan, an expert on anti-Black violence in the United States.

As a historian of modern European Jewish history, I am aware that the term “pogrom” has been used exclusively to describe attacks upon a Jewish minority by a mob composed of the antisemitic majority. Yet on Wednesday the world witnessed scenes that resonated with the very same images of mass violence in Ukraine that are the origin of the term, or the American variation of lynch mobs and “redemptionist” terrorists that were commonplace before the Civil Rights era (and beyond). But the images are not the only parallel.

Like Russia-Ukraine and the Jim Crow United States in 1921, this paroxysm of violence did not arise out of a vacuum, but out of a structural similarity between American and Russian-Ukrainian society that persists to this day. And the central pillar of this structure is a shared belief in the racial inferiority of others as the foundation of social stability. The risk posed by questioning this social order was and is viewed as so great by supporters that all means, including and especially terrorist violence, were viewed as not just acceptable, but necessary.

As in 1921, the pogrom and sacking of the US capitol building was based on fantasy and pathology. Pogromchiks in Russia-Ukraine believed (and continue to believe) that Jews were an alien race whose aim was no less than the destruction of Russia and the parasitical enslavement of its innocent “real” citizens. Racist mobs in the United States believed (and continue to believe) the equality of Black citizens under law and in daily reality to be a nefarious threat to the values of “true” (meaning White) America. Supporting and perpetuating this worldview required in both cases a belief that was at odds with observable reality. It relied upon the persistence of a mythology in place of history, of denial and delusion in the place of reason and rationalism. It opened the doors and then was sustained by conspiracy and revenge.

Most importantly, though, the forces of both east European pogromchiks and middle American lynch mobs emerged, as on January 6, out of societies struggling with monumental change, at moments of progress and enlightenment that threatened to uproot the powerful immoral structures of the past. In Russia and Ukraine, the violence of 1921 exploded in the wake of a revolution that not only preached universal human equality but initially made significant and visible efforts to elevate members of groups — including Jews — that had been excluded from civic and political participation. In the United States, the horrors of organized terror against Black citizens rose in the wake of, and as a means of enforcing, the dismantling of equal rights and protection under law that had been achieved, albeit imperfectly and incompletely, during Reconstruction. This, too, was the explicit strategy and logic of Wednesday’s pogromchiks: terror to stop change, violence to return to a fantasy of greatness that has never existed.

We are at another such moment today. And while the book has not yet been written describing how our society will emerge from this moment, it is worth being hopeful that the shock of this astonishing, historical debasement of our nation will form the crack in our darkness that will prove to be “how the light gets in,” in the immortal words of Leonard Cohen.

At the same time we must soberly remind ourselves of an important fact: in both Russia-Ukraine and the United States a century ago, this darkness prevailed. It became, and remains, our darkness.

Please join us for a deeper consideration of these and other questions on Monday, January 11, 2021 at 12 noon. The url to attend the virtual symposium is: www.yu.edu/yuvoices.

About the Author
Jess Olson is professor of Jewish history at Yeshiva University and a psychoanalyst in private practice in New York. He has written several articles and two books on Jewish history, culture, Zionism, and religious identity.
Related Topics
Related Posts
Comments