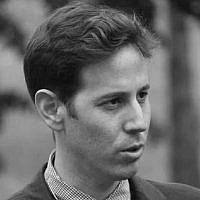 The Blogs
Itay Milner
Apply for a Blog
Please note that the posts on The Blogs are contributed by third parties. The opinions, facts and any media content in them are presented solely by the authors, and neither The Times of Israel nor its partners assume any responsibility for them. Please contact us in case of abuse. In case of abuse,
Report this post.

The chronological progression of these holidays is no coincidence. Yom HaShoah teaches us that our peoples’ greatest tragedy came at a time when the Jews had no state or army of their own. Yom HaZikaron reminds us that establishing that state came from much more than just worldwide sympathy after the Holocaust and that Jews still have to make the ultimate sacrifice to win and secure our freedom even today. Finally, Yom Ha’Atzmaut is when we dry our tears and celebrate the establishment of the Jewish state.

As a native-born Israeli now working in the Ministry of Foreign Affairs, I attach special meaning to these lessons, enhanced by the fact that I am the grandson of a Holocaust survivor. But it is also clear that Jews living all over the world have identified for decades with the message and lesson of the Holocaust-to-Israeli-statehood progression as they enjoy a special form of self-esteem and confidence, thanks to the existence and success of the State of Israel.

Yom HaShoa is even more important during this current era because, 76 years after the fires of the Auschwitz crematoria were snuffed out, many younger Jews around the world, and even some in Israel, are losing that connection. Many see the idea of nation-states as old-fashioned, or even oppressive. They’re exposed to and convinced by the argument that sovereignty for one people means the brutal exclusion of another. Jewish statehood and self-determination is being defined as some sort of undue “privilege.”

That false argument about privilege is precisely what my grandfather and his fellow Jews in Europe often faced whenever Jews were seen to be flourishing. Jewish success and endurance was demonized in much the same way as Israel’s success and endurance are demonized now. When Europe’s Jews were seen as privileged, the argument was that they received those privileges through schemes and other crimes. Israel’s success and very existence is often described today as an award for the same kind of evil behavior. In other words, today’s anti-Zionism is not only just a form of antisemitism, it’s eerily similar to the antisemitism that led to many atrocities against our people.

This realization comes as antisemitism is on the rise from all corners of society. A report issued earlier this year from the Anti-Defamation League showed that antisemitic incidents jumped to nearly a record high in America between 2015 and 2019.

Yom HaShoa should act as a reminder of why that connection between Israel and all the world’s Jews holds such high stakes. Either the State of Israel continues to grow stronger, or the fate of the Jewish people around the globe is threatened. Millions of Jews died for this reality and it cannot be forgotten. It is that simple.

The added mission for Israel’s diplomats like me, compared to representatives of other nations, is we understand just how recently our people were completely disenfranchised and unable to protect themselves in the world. We also face the challenges of antisemites who today insist Israel does not have a place among the nations of the world, just as the antisemites of the past said Jews didn’t have the same rights as other people. Some younger Jews in America and Israel may not see this very similar hateful thinking, but they should not be fooled into thinking it is anything else than the same old hate.

Thus, those who promote the truly antisemitic nature of anti-Zionism inadvertently disprove their own arguments against the need for the State of Israel. As they continue to deny only our people our right to a homeland, it becomes more obvious why Israel needs to continue to exist and thrive. This is an important lesson too many younger Israelis and Diaspora Jews may be forgetting.

Of course, the State of Israel does not seek the world’s sympathy or base its entire existence as a response to antisemitism. That’s not what we are about. Israel is, and continues to strive to be, much more than just a response to hatred. But remembering the Holocaust is often the best way for the world to understand the unique threats which Israel and the Jewish people still face today.

Of course, the State of Israel is always looking to the future, and we see our relationships with the Jewish and non-Jewish communities throughout the world as a breeding ground for celebrating and improving life. But unless we take some time to pause once in a while to remember the worst attacks against life in modern times, we will not be able to truly appreciate what we have now, or achieve any of our loftiest goals for tomorrow.

About the Author
Itay Milner is the Spokesperson and Consul for Media Affairs at the Consulate General of Israel in New York.
Related Topics
Related Posts
Comments