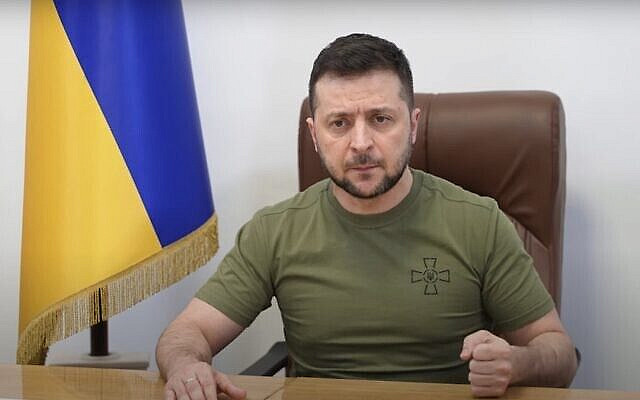 On Yom HaShoah, the question of learning from the great catastrophe of the Holocaust – without diminishing it in any way – is more intensely on the agenda than ever before. Several factors have come together to make the need for appropriate distinctions today more important than ever.

First, of course, is the concern about declining knowledge about the Holocaust among the younger generations, a product of time passing by, of survivors passing away, and of the diminution of the reality of the Holocaust by trivialization and false comparisons.

While many ingredients go into the challenge of educating about the Shoah and making it relevant in today’s world, the need to avoid trivialization by the abusive use of comparisons to today’s evils is primary. If everything that goes wrong is comparable to the Holocaust, what understanding can there be of the unique evil of that event?

One of the sharpest manifestations of this took place when Vladimir Zelensky spoke to the Knesset last month about the horrific Russian assault against his country. His task was to move Israel to do more to support Ukraine. Unfortunately, unlike his prior presentations to the UK House of Commons and the US Congress, where he was spot-on in touching the appropriate emotional chords— in the UK sounding Churchillian, in the US speaking to the memory of Martin Luther King Jr. and the 9-11 terrorist attacks – in Israel he distracted from his message by comparing what Ukrainians were experiencing to the Holocaust. And very quickly that became the topic of the day rather than the horrors of the invasion itself and what Israel could do to better assist Ukraine.

All of which begs the question about where the line needs to be drawn in speaking about the Nazis and events in the current world. Avoiding false comparisons to the Holocaust should not negate the important potential to learn about how hate can expand and explode from the Nazi period and where it may coincide with current events.

Returning to Zelensky’s presentation to the Knesset, had he chosen not to speak per se about the Holocaust, but had referred to the fact that Putin’s invasion of Russia, with its propagandistic false flags, its claims that he was merely protecting the security of Russia, its massive arming of forces without any real provocation, its overturning of the international order that existed, all have echoes of German expansionism in the 1930s ending with the invasion of Poland in September 1939 – he would have been right on target and evoked great sympathy and understanding from Israelis for his predicament.

There is much to learn from the Nazi period concerning threats to democracy, how democracy itself can be used to bring down an authoritarian regime, how the public can be brainwashed into prejudicial stereotypes, how a tradition of antisemitism and racism can be resuscitated in times of crisis. We must not shy from such understandings without suggesting, per se, that today’s threats resemble those posed by the Nazis, particularly to the Jewish people.

Learning from the Holocaust, without drawing direct comparisons, is a nuanced balance that requires sensitivity and perspective. In our polarized political atmosphere, those are characteristics that are in short supply.

The uniqueness of the Shoah, even among genocides, is so stark, mostly notable in the fact that Jews were targeted for extermination whether they lived in countries assaulted by the Nazis or in countries that were allies of the Nazis. Murdering Jews superseded anything to do with the war itself. This reality belies any equivalency or comparison that any current situation warrants.

And yet, in a world that is seeing authoritarianism expanding, including on the European continent by Russia and in Asia with the aggressiveness of China and Iran, there are legitimate questions to be asked on whether the Nazi period has anything instructive to teach us in dealing with these challenges.

So, on this Yom HaShoah, let us commit to intensifying education programs about the Holocaust and to standing up against inappropriate comparisons to the Holocaust, which only exacerbate the challenge of keeping the murder of six million relevant.

At the same time, let’s be willing to learn, where appropriate, from the challenges of the Nazi period on how to protect our democratic societies and maintain a peaceful world.

An immense and complex set of challenges.