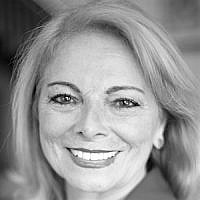 The Blogs
Gina Ross
Teacher, Keynote Speaker, Multi-cultural Psychotherapist
Apply for a Blog
Advertisement
Please note that the posts on The Blogs are contributed by third parties. The opinions, facts and any media content in them are presented solely by the authors, and neither The Times of Israel nor its partners assume any responsibility for them. Please contact us in case of abuse. In case of abuse,
Report this post.

Melissa began telling me about a terror attack she experienced 25 years ago in Jerusalem. She was working at a restaurant on the second floor of a building. Two terrorists started shooting in the street, aiming at people in the different restaurants located below her. Several people died.

She remembered that a customer closed the door of the restaurant and stood guard with a pistol in his hand while Melissa and others lay on the floor to protect themselves. They had no idea what was happening outside.

They did not know that the Israeli forces had arrived and were positioned on the rooftop, trying to shoot the terrorists. They knew only that someone was shooting from the rooftop above them. When the shooting stopped, Melissa left the restaurant and went home. Her nightmare occurred the next night and haunted her on and off for 25 years.

Using a technique that I had introduced to and taught in Israel for the last 24 years, I asked Melissa just to notice what sensations she felt in her body when she told me about the event. She reported that she felt a tight sensation in her chest and was having difficulty breathing. I asked her to focus on the tightness in her chest and notice what happened next.

As she closed her eyes and focused on the tightness, an involuntary deep breath came up within a few seconds and the tightness got looser. I asked her to focus again, notice that the tightness was looser, and give it more time. Within another 30 seconds, she took another involuntary breath, which came up on its own. Whatever tightness she still felt was completely gone. She began to breathe normally.

I then asked Melissa to again recall the event at the restaurant. She remembered the man with the pistol and felt that the pistol was too small. I did a “corrective experience” with her, another tool of the technique, which helps people move through their trauma. We call it a “fantasy resource.” It seems trivial, but it works. I asked her to imagine that he was holding a more powerful weapon. She did but said that the newly imagined weapon was not enough.

I asked her to imagine what else could have helped her. What else would she want? What would her body want to do? She said, “At that point, I wanted to get out of the restaurant, but not through the front door. I wanted to run through the back, through an imaginary tunnel, but I needed ferocious dogs to guard my back. I also needed to fight the terrorist to make sure he did not come after me, so I sent the dogs to disarm him and bring him down. Then, I wanted to talk to him.”

Melissa raised her arm and pointed a finger in a very firm gesture. She told the terrorist, “It is not ok to do that!” She felt good saying it several times, but she also felt hesitation, a voice inside of her suggesting he might not listen to her.

She repeated the firm gesture several times and the sentence that came with it: “This is not ok to attack and hurt and kill people.” She felt that when she talked, and he didn’t give up his desire to fight, she would say, “If you don’t give up the fight, my dogs will hurt you, but they will not kill you because I am not a killer, and you will not turn me into you. I don’t want to do that. I don’t want to be like you.”

As we continued the session, she imagined the dogs fighting the terrorist, immobilizing him by sitting on his neck, but not killing him. It was clear to her that she did not want to kill anyone.

As she realized that the terrorist might not give up his plan to kill people, a new sentence emerged, which expressed her new, more profound understanding of this type of situation: “I am not your enemy. I don’t want to kill you. But if you insist on being my enemy, I must defend myself, and I still will not be like you.”

As she said that, her eyes shone with new insight. “Wow!” she said. “That is really holding the right and the left’s positions at the same time. The left feels guilty defending themselves against the enemy, and the right wants to destroy the enemy, which makes them behave like the enemy. My new position is—I will defend myself, but I will not become hateful or power-driven like the enemy. I will stay true to my being.”

She then told me that the release she felt came from the understanding that “although someone treats me as his enemy, I don’t have to become the enemy, and I can declare that I am not the enemy, and yet I have the right and can defend myself.”

“Wow! This is the left and right united. We do not need to fight among ourselves! We can unite,” she said.

At a time when the recent Israeli election has polarized the country, Melissa’s organic conclusion is a message of potential unity.

Gina Ross, MFCT, is the founder and President of the International Trauma-Healing Institute USA and ITI-Israel.

About the Author
Gina Ross, MFCT, is Founder/President of the International Trauma-Healing Institutes in the US and in Israel. Born in Aleppo, Syria, Gina has lived in eight different countries on four continents. A specialist in individual and collective trauma, she is the author of a series of books “Beyond the Trauma Vortex into the Healing Vortex,” targeting 10 social sectors implicated in amplifying or healing trauma. She is creator of the Ross Model: Protocol for Conflict Resolution and Successful Communication. Gina focuses her analytical and advocacy work on the collective trauma behind politics, specifically the Israeli-Jewish/Palestinian–Arab conflict.
Related Topics
Related Posts
Gina Ross