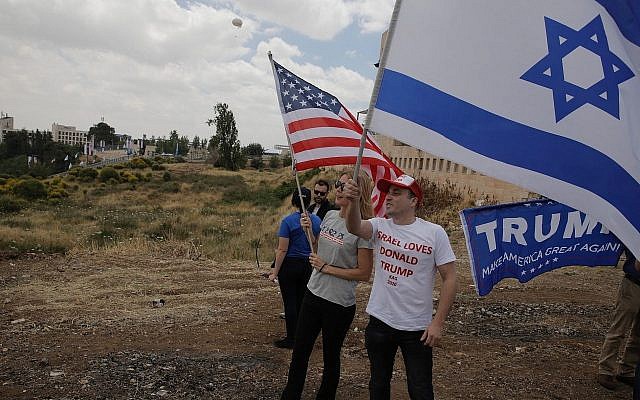 Israelis hold American and Israeli flags with the new US Embassy in the background in Jerusalem, May 14, 2018. (AP Photo/Sebastian Scheiner)

The two largest Jewish communities in the world, Israel and the United States, continue to share a close affinity to each other. But three major polls published recently highlight what many have known intuitively for some time: two Jewish worlds are in the making. The first, a progressive, open, liberal and pluralistic one dominates the mindset of most American Jews. The second, a conservative, particularistic, introspective and decidedly less tolerant worldview flourishes in contemporary Israel. The more the features unique to each community coalesce, the greater, too, the distance between the majorities in each setting.

Those seeking a bridge between Israel (the center of gravity for much of Jewish life today) and Jews abroad would do well to delve more deeply into the reasons for this growing rift and seek innovative ways to deal with their consequences. This does not necessarily involve increased financial investment or more pontification, but rather a turn to new value-based strategies that reflect the diversity of Jewish existence on the eve of the third decade of the 21st century.

Trends in Israeli relations with Jews in the Diaspora (primarily in the United States) are consistent across the polls conducted on behalf of the UJA-Federation’s Survey of Israeli Jews in late 2017 and early 2018; the American Jewish Committee’s poll of 2,000 Jews on both sides of the ocean published in early June; and the latest in-depth study carried out by the Jewish People Policy Institute of the Jewish Agency as presented to the Israeli cabinet early last week. The message is clear: while the vast majority in both communities stress the importance of good ties between the communities, and underline the importance they attribute to Israel as the living vortex of contemporary Jewish existence, they increasingly diverge, not only on policy matters, but also on guiding principles. To put it another way: there is little debate on the significance of the connection with Israel for both communities (over 70 percent in the AJC and UJA polls); there is growing disagreement on Israeli government directives and on the overall trajectory of the country.

The most obvious differences appear on matters related to religion and state. In the AJC poll, 73% of American Jews express support for a mixed-gender prayer area near the Western Wall, while only 42% of Israeli Jews back this idea (in the UJA survey 49% of Israeli Jews supported the freeze on an agreement to establish a pluralistic prayers area at the Kotel). Indeed, Israeli Jews show overwhelming support for Orthodox religious services (at a rate of 5:1), even though, as the UJA study demonstrates, slight majorities are willing to entertain recognition of Reform, Conservative and civil arrangements as well. The AJC report shows that a full 80% of American Jews favor allowing non-Orthodox rabbis to perform marriages, divorces and conversions. Only 49% of Israeli Jews agree. The extent of religious pluralism — a key indicator of the internalization of tolerance for divergence in general — is a constant barrier between most Jews in America and Israel.

A similar divide is developing around issues related to the Israeli-Palestinian conflict (but not on questions of Israel’s security in general). In the AJC poll, 59% of American Jews support a two-state solution; only 44% of their Israeli counterparts follow suit. Differences of opinion also pertain on the future of the settlements and even on support of the Trump decision to relocate the American embassy to Jerusalem. A large majority of Israeli Jews applauded the move (85% in the AJC poll), in comparison to 46% of American Jews. Unquestionably, the bulk of American Jewry — wary of the Trump presidency, its connections with the Evangelical movement, and its distinctly illiberal agenda — is at odds with the thrust of public opinion in Israel.

These discrepancies inevitably spill over into other areas as well. Of late, American Jews have been outspoken in their opposition to their administration’s treatment of migrants (and especially to the separation of children from their parents). Israelis have barely addressed the topic, and only a minority has protested repeated attempts to rid the country of African asylum-seekers. US Jewry is at the forefront of the struggle to protect minority rights and has given generously to projects promoting a shared society in Israel. Israeli Jews still believe that it is legitimate to grant special rights to Jews at the expense of Arabs in the country. American Jews find it difficult to comprehend new limitations on freedom of speech and association placed on critics of the Israeli government and on progressive civil society organizations — just as they decry such moves at home. And, all too frequently, they are hard put to understand Prime Minister Netanyahu’s support for the new autocrats in Hungary, Poland, Slovakia, and the Czech Republic, whose rhetoric and actions defy the democratic rules of the game and fly in the face of recent Jewish history. A yawning chasm is developing between the values dear to American Jewry’s liberal majority and those upheld by the mostly conservative bulk of Israel’s population.

It is therefore not surprising that most Israelis are uninterested — or indeed resistant — to any involvement (let alone undue interference) by Jews from abroad in their internal affairs. The UJA report is particularly telling in this regard: over 67% of Israeli Jews do not think that the Israeli government should take the views of American Jewish leaders on settlements into account; 64% support ignoring their positions on negotiations with the Palestinians; 69% do not see their stance on the treatment of Arab citizens of Israel as relevant to policy. Increasingly, as the JPPI study highlights, a majority of American Jewry (68%) sense a distancing between themselves and their Israeli counterparts (48% of Israelis agree).

Since they feel less needed and appreciated, Jews outside of Israel increasingly look elsewhere. They do not, however, see themselves as less Jewish: to the contrary, they increasingly direct their activities to concrete domestic and international challenges — often propelled by what they consider to be essentialist Jewish concerns. For them, “tikkun olam” applies everywhere and constitutes a living testament to their Jewish heritage — even if it is not disassociated from their identification with the present government of Israel.

Two distinct patterns emerge from these studies. One accentuates the growing rift between many Jews in Israel and most Jews in the Diaspora, who — while admittedly sharing a common history and destiny — possess distinctive agendas and uphold differing normative priorities. For most American Jews, liberal values and Jewishness are inextricably intertwined; for most Israeli Jews, their Jewish identity takes precedence over any specific ethos. The place of Israel in these diverging Jewish worldviews fluctuates and may impact Israel’s relations with world Jewry in the future.

Yet a second pattern is also evident: the cementing of a firm alliance between progressive Jews in Israel and abroad, coupled with the emergence of a similar coalition between conservatives on both sides of the ocean. These grand coalitions mirror deep divisions both within Israel and among Diaspora Jews — reflective of growing crises throughout the democratic world. These cannot be mended by pouring money into Diaspora Jews, as Naftali Bennett suggested in a recent debate — they have to address profound questions of identity and values.

A new strategy of Israeli-Diaspora relations must begin with the recognition of — and the respect for — the diversity which constitutes Jewish life in today’s world. These nuances, coupled with the nurturing of a sense of joint destiny common to both communities, is the starting point for a revised and vibrant set of multi-faceted partnerships that constantly draw on varied aspects of the Jewish legacy and the universal norms it has engendered. Without increased tolerance and appreciation for the heterogeneity of contemporary Jewish peoplehood, Israel runs the grave risk of losing its global Jewish base.