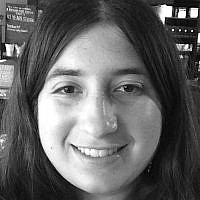 The Blogs
Sasha Factor
Apply for a Blog
Advertisement
Please note that the posts on The Blogs are contributed by third parties. The opinions, facts and any media content in them are presented solely by the authors, and neither The Times of Israel nor its partners assume any responsibility for them. Please contact us in case of abuse. In case of abuse,
Report this post.

In twelfth grade, I majored in art history. We had to learn 140 paintings and statues for our final, which included pieces that took place in New York City. We learnt about a statue who was presented as a man walking alone in New York City, symbolizing the commonality of New York behavior; my art teacher explained that most people in New York City walk alone. They live in their own world, oblivious to their surroundings. They know that in order to be successful, they have to fend for themselves. They continuously compete with everyone around them, so that they can achieve the “American dream”. They are consumed with money. They yearn to buy that new mansion, or that pricy piece of clothing that they have been eyeing. They may seem polite and nice when they approach someone at work or in the store because that is how they were taught to behave. However, the general New Yorkers are not polite or nice to strangers because they genuinely care.

When I officially moved to Israel, I experienced a major culture shock. As I was about to sit down on a bus one day, an Israeli lady screamed at me:” אל” תשבי שם, זה  מלוחלח – Don’t sit there, it’s dirty”.  As an American, my first thought was: “Why does she care? She doesn’t even know me”. I was appalled at her audacity. “She had no right to get involved in my personal business or to scream at me, since I was a complete stranger. Then I realized that she was a stereotypical Israeli talking. I realized that this is how all Israelis act. They are nosy and rude people for a reason that is far more deeper and justifiable than what their actions portray them to be on the outer surface. I realized that the reason why this lady screamed at me and told me to sit somewhere else was because she genuinely cared.

I still remember when the whole country was praying for Gilad Shalit’s homecoming during my early years of immigration. The event was mesmerizing, unifying, and heart- warming. I saw stickers of Gilad Shalit on people’s cars and clothes ;billboards of Gilad were on every highway on the road, which read in big Hebrew letters: גלעד שליט חוזר הביתה”- “Gilad Shalit is returning home”. I was so mesmerized by the concept that a whole country was praying for the return of merely one boy. One boy whom most people did not personally know. Even though Israel did not personally know Gilad, Gilad’s captivity still took a toll on the whole country, as a person loses a puzzle piece. As I took part in the communal prayer for Gilad’s release, I fell in love with the country that I was now a part of. Israel no longer felt like a place of foreignness and strangeness because I knew that I was not alone. We were all brothers and sisters who genuinely cared for each other as a family does for one another.

About the Author
Sasha Factor made Aliyah seven years ago with her family. She was in the Na'ale boarding school program for high school, after which she did a year of Sherut Leumi in a gan in Kfar Etsyon. Her family then moved back to the USA for financial and communication reasons. However, Sasha decided to stay and study English Literature at Bar Ilan University.
Related Topics
Related Posts
Comments