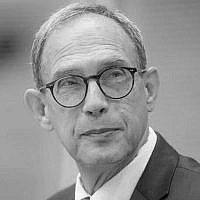 The Blogs
Nachman Shai
Apply for a Blog
Advertisement
Please note that the posts on The Blogs are contributed by third parties. The opinions, facts and any media content in them are presented solely by the authors, and neither The Times of Israel nor its partners assume any responsibility for them. Please contact us in case of abuse. In case of abuse,
Report this post. 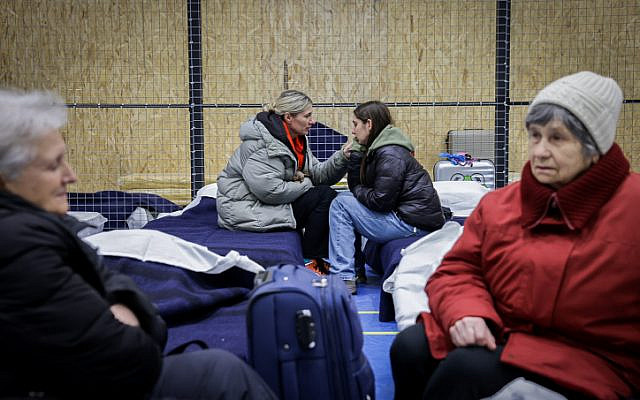 Jewish Ukrainian refugees sit at an emergency shelter sponsored by the IFCJ (International Fellowship of Christians and Jews) and the JDC in Chisinau, Moldova, March 5, 2022. (Nati Shohat/Flash90)

The war raging in Ukraine today has plunged Jews in that country into the most acute crisis that has faced any large Jewish community in decades.

We, the global Jewish community, are therefore facing the biggest test in a generation to demonstrate as a people the solidarity and care for our brothers and sisters facing such danger that previous generations showed in similar situations.

Ukraine is home to at least 200,000 Jews and those with Jewish ancestry, comprising one of the biggest Jewish communities in the world outside of Israel and the US. That community, along with all other Ukrainian citizens, is now facing the most dire circumstances imaginable, from indiscriminate aerial and artillery bombardment to food shortages, loss of property and possessions, and exposure to the bitterly cold Eastern European winter.

If ever there was a time for the global Jewish community, in Israel and the Diaspora, to take responsibility for its brethren, then that time is now.

I believe that the initial response shown by the government of Israel and world Jewry represents the opening of a new chapter of Jewish solidarity, something which is particularly needed and welcome in Israel.

In the past and even today, the default attitude of many Israelis, including opinion makers and senior government officials, to the concerns of Jews in the Diaspora has often been to tell them simply to make aliyah. Even in the early 2000s when Jewish leaders were reviving Jewish life in the former Soviet Union, former prime minister Ariel Sharon reprimanded them for building Jewish life anew in those lands, saying it was stymieing aliyah.

Today, however, the situation in Israel is changing.

The State of Israel has acted swiftly to assist Ukrainian Jewry in a number of ways. We have approved the transfer of NIS 15 million (some $4.5 million) to two large Jewish organizations on the ground for them to purchase food, medicine, and other basic necessities. The money is also being used to provide physical security for Jewish communities in the country, a crucial necessity in such unstable times, and to help transport those seeking to reach the borders.

In addition to this support, the Jewish Agency and Nativ have been working in incredibly difficult circumstances to assist Jews in Ukraine who have requested to make aliyah during this time get that process moving.

And of course, Israel’s foreign ministry has worked tirelessly to extract thousands of Israelis from the country, as is the responsibility of any sovereign country to its citizens.

At the same time, the world Jewish community has mobilized in full force to take care of our Jewish brothers and sisters facing the awful and perilous realities of modern warfare. Whether it is the incredible work of the Jewish Federations of North America, Keren Hayesod, the JDC, Chabad, and numerous other groups, Jews around the world have come together at this moment in solidarity with their brethren in Ukraine.

What we are witnessing in Israel in particular is the beginning of the emergence of a true sense of Jewish solidarity, in which the Jewish state seeks to assist all Jews, wherever they might be, and where they are at the time of their distress.

If Ukrainian Jews or any other Jewish community need Israel as a place of refuge, then we will of course welcome them with open arms. But we in Israel must be also be ready and willing to assist Jews even if they do not wish to move to this country. The assistance that we have provided to Ukrainian Jewry is a crucial next step in solidifying Israeli solidarity with Diaspora Jews. And the provision of this aid is testament to the readiness of the Israeli government to look out for the wellbeing of the global Jewish people, and our desire to take the lead on this front as well.

The decision to extend this assistance received broad and positive coverage in the Israeli media and has helped to demonstrate to the Israeli public at large what Jewish peoplehood actually means. Israelis are now seeing in real time what peoplehood means, and what taking care of Jews abroad actually looks like.

For me, Jewish peoplehood, the idea that we are indeed one people despite being dispersed around the globe, is a critical concept for the global Jewish people today.

If Israel and its citizens cannot understand how important its relationship with Diaspora Jewry is, the Jewish state is likely to become alienated from large parts of the Jewish people, a trend which has already begun within certain demographics.

Equally, world Jewry must also work to ensure that it does not lose its sense of belonging to the Jewish state, a key anchor for Jewish identity, culture and indeed security for the global Jewish people.

The Jewish nation is small one, and has always been so throughout history, often with few reliable friends upon who they could depend and trust. That is why Jewish solidarity and Jewish peoplehood is so critical. On whom can we ultimately rely for support and succor if not ourselves?

If the ties that bind us weaken too far, perhaps ultimately we would not be there for one another in times of need. That would be one of the most calamitous tragedies of our history.

That is why the relationship between Jews in Israel and the global Jewish community is a strategic asset for both halves of the Jewish people today, and why the current Israeli government, including my ministry, is working hard to ensure that we do as much as possible to bolster these ties, including advancing the concept of Jewish peoplehood.

As I see it, this mission is one of the most important challenges facing the Jewish state today. But I also believe that there has been a change in Israel over the last 20 years and a growing acknowledgement of the importance of global Jewish peoplehood.

The work we in Israel have done for our fellow Jews in Ukraine over the last week is surely evidence of that, and shows an evolution within Israeli society which now elicits a greater understanding of the value of mutual responsibility between Israel and the Diaspora.

There is however still much work to be done, among both halves of the Jewish people, to ensure that this principle is advanced and sustained.

The concept of Jewish peoplehood is crucial to the vitality, integrity and security of the global Jewish people. The ongoing cultivation and preservation of this value must be the work of us all in the coming years.