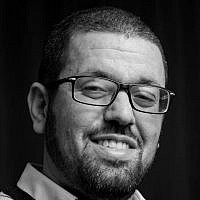 The Blogs
Avraham Shusteris
Aliyah Provocateur
Apply for a Blog
Advertisement
Please note that the posts on The Blogs are contributed by third parties. The opinions, facts and any media content in them are presented solely by the authors, and neither The Times of Israel nor its partners assume any responsibility for them. Please contact us in case of abuse. In case of abuse,
Report this post.
The fact that a small minority party was able to attain premiership in the current Israeli government has opened a wide array of political possibilities that until now were never given real consideration. One such possibility is having a religious party being selected to lead the State of Israel. In fact, Aryeh Deri of the Shas Party was actually offered a rotational premiership opportunity by Netanyahu in the previous coalition negotiations as reported here:

This begs the question, what would a religious run government of Israel look like, and what would its policies be?

What would such a government’s position be on sovereignty in Judea and Samaria?

To what extent would diplomacy and military policy be restrained by its reliance on the US and other world powers?

Would such a government finally prioritize Israel’s Jewish character over its democratic one?

One intriguing factor to consider in such a scenario is that the haredi religious parties are guided and directed by Torah sages. Therefore if a haredi religious party were to lead the government, the effective Prime Minister would be the Gadol Hador (Torah leader of the generation). When was the last time that there was a leader in Israel who was both a great sage of the generation and the effective political leader?

In response to the death of Rabbi Meir Kahane z”l more than 31 years ago, an article was published in the Jewish Observer (a prominent hareidi weekly magazine affiliated with Agudat Yisrael of America) which brought to light a debate about the roles of realism and caution in Israeli policy making from a hareidi perspective.

This article explained that the hareidi approach to governance at the time was an approach based on realism, rationality and restraint. Despite the fact that Jews have returned to living in the Land of Israel in large numbers, operationally it would be prudent to proceed with business as usual – by continuing our defensive posture as a nation in galut. Given the spiritually deficient nature of our country and our government, it would be premature and even dangerous to begin making policy based on a confident and defiant national posture, they believed. After all, it was claimed, if we are not “holding there” in our faith on an individual level, what justification do we have in taking “unrealisitic” and maximalist positions that overly rely on faith on a national level. While this was once the prominent school of thought within the hareidi camp, other schools of thought have emerged and grown over time.

The Talmud (Eruvin 55a) states that the Torah is accessible and not in the heavens, but if it were in the heavens, we would be obligated to go to the heavens to get it. In other words, the Torah isn’t limited by what we perceive to be realistic, the Torah defines what is realistic. It is precisely our rejection of “realism” in favor of faith in G-d which is what made us G-d’s chosen people in the first place.

The Torah was offered to every nation before it was offered to the Jewish people and every nation took a reasonable, rational and realistic approach to the offer. They asked to see what was written in it, and on that basis they would decide if it was something that was in their best interest to accept.

Not so the Jewish people. We said Naaseh V Nishma, and accepted the Torah as is, without even seeing what was written inside. This wasn’t simply reckless impulsivity. The Jewish people knew that G-d is good and would not offer us a Torah that we couldn’t keep or that wasn’t in our best interest, so we took it before even knowing what we were getting ourselves into. This is why we became the Chosen People.

It is this simple faith that is our highest and defining characteristic as a people. If national policy decisions would be made from this vantage point of simple and straightforward faith, the outcomes would be unlike anything we have seen in Israel’s history.

The Zohar teaches that G-d, the Torah, and the Jewish people are all one. True and complete faith extends beyond our faith and trust in Hashem alone, it includes faith in His Torah, and equally as important, faith in Klal Yisrael.

Regardless of how bleak our condition seems as a nation, we have an obligation to have faith in ourselves. We are more than just a demographic- we are a concept that predates the existence of the world itself. The potential for spiritual greatness is in the DNA of every Jew and can emerge at any moment. We have no right to doubt ourselves as a nation or second guess our merits and how worthy we are of G-d’s providence.