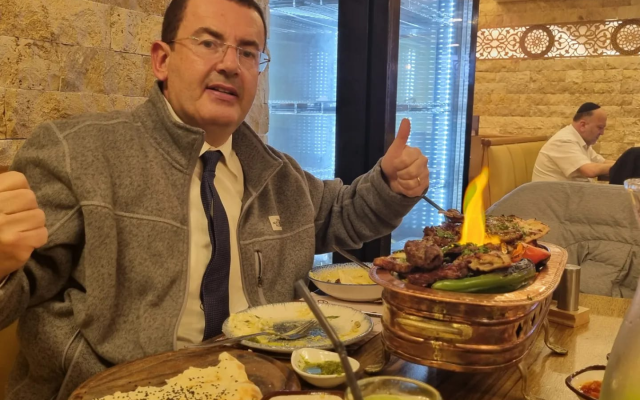 A little over one year ago, few Jerusalemites had heard the name Shimshon Sam Leshinsky.

The soft-spoken Australian immigrant resides in the Jerusalem suburb of Har Homa — far from the bright lights of downtown.

He works in administration for a government department. And nothing much about his aliyah story to date seems that extraordinary.

But that’s where the similarities between Shimshon Leshinsky and your typical aliyah story end.

Leshinsky is no ordinary immigrant — in fact, he defies even well-worn influencer stereotypes (he doesn’t own a selfie-stick, is far past his teens, and cares more about honesty than going viral and hashtags.)

One year since he began sharing his iconic food reviews on the Secret Jerusalem Facebook group and Shimshon’s fame has spread far and wide through Jerusalem and beyond.

He cannot walk far through the city without being mobbed by fans — or at least taken aside by some wellwishers who want a selfie with their foodie hero.

Leshinsky is open about the fact that he has accepted the hospitality of several of his readers who have had him over as a guest (he enjoyed one of his first Thanksgiving dinners in Israel thanks to a family he met through the network). He refers to these readers as “Secret Jerusalem friends” and is sometimes escorted by a growing entourage of them as he samples the capital’s offerings. In this way, Leshinsky bridges the gap between the virtual world of the popular social networking group and the real world that he we all inhabit in parallel—reaching across demographics to provide a staple of interest for residents both young and old, Hebrew-speaking and Anglophones.

His fans appear to enjoy something of a parasocial relationship with the food icon even if it’s hard to spend time on the Jerusalem restaurant scene without rubbing shoulders with the food reviewer (he comes attired, almost always, in a characteristic jacket and tie).

He’s shared with us details of his simachot including his daughter’s wedding last year and his delight at discovering his new in-laws’ traditions.

He espouses the distinctly Jewish idea that social networking is like participating in a virtual Shabbat meal.

And Leshinsky has surprised many of us with his adventurous palette that seems to vacillate effortlessly between sampling fiery Moroccan delicacies and classically Ashkenazi organ meats. Although the food reviewer was recently attacked for referring to arepas as “Venezuelan pitas,” Leshinsky takes these little moments of learning in his stride. For Leshinsky and his indefatigable palette, it seems there is always something else to try—always a new corner of the Jewish world left to experience vicariously through its culinary imprint upon Jerusalem’s restaurant scene.

As Leshinsky’s reviews have amassed in number — at this stage, I estimate he’s published well in excess of 100 of them — so too has his repute.

He’s been interviewed on multiple media outlets — both English and Hebrew-speaking (his review of Effendi was picked up by Kan’s radio show). And his reviews — famed for their candor and refreshing wit — have been spawned an unofficial fan-run fanpage with more than 1,000 likes. A tongue-in-cheek campaign to elect Leshinsky mayor even surfaced on the network.

Who is Leshinsky and how did he get here?

He Runs Between Restaurants To Keep Fit 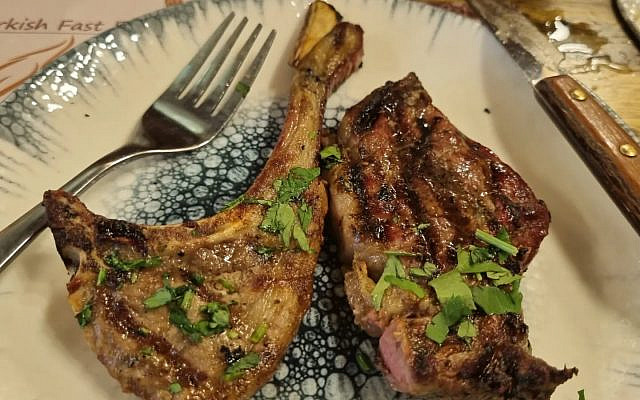 Having enjoyed three enjoyable lunch dates with Shimshon over the course of the pandemic — I recorded Shimshon’s first video review during my last one at Yolo Bakery  — I’ve gained a little bit of insight into the culinary life and brain of this shadowy south Jerusalem figure from down under.

For one, Shimshon plans his reviews out ritualistically (I work in communications and admire his organizational skills in this respect).

Although associates say that he sometimes keeps his day’s reviewing agenda a closely guarded secret—for by now there are few venues in Jerusalem that haven’t heard of his name. He jokes about running between food excursions to keep fit; appears to rarely eat in his own home; and peppers his reviews, like a steak, with well-seasoned anecdotes about his time living in the city and his family’s origins in Australia.

Readers of the Jerusalem Post have been given reasons to believe that that newspaper’s own food correspondents may be taking the odd cue from Leshinsky’s eating forays. A series of copycat reviewers has even sprung up on the website — beginning their own reviews with Leshinsky’s classic barrage of questions intermixed with shrewd observations; a highly unusual verbal potpourri of information.

As is well known, Shimshon insists on paying in full for his meals — he doesn’t want there to be any doubts on his absolute impartiality — and he shares my journalistic disdain for reviewers who receive meals that were comped by the venues. But he also appears to plan his next review destination carefully ahead of time.

Sadly, over the course of this harsh pandemic, many great establishments have been forced to shut their doors.

Leshinsky’s main motivator — besides being, apparently, a voracious enjoyer of food — is to shine a spotlight on some of the city’s fine cuisine.

I attempted to borrow some of Leshinsky’s industriousness recently when I reviewed a new meat restaurant in Baka. I was quickly and rightly assailed for my failure to note the teudah —at least more assiduously than “it’s kosher of some variety or another” (the remark was somewhat in jest, which is always difficult to translate into black and white text on the internet). After one year in the review game, Leshinsky doesn’t make these mistakes.

He is quick off the mark when a new restaurant opens its doors. Liberal with the details. And recently hasn’t shied away from pointing out when the odd food establishment in Jerusalem didn’t live up to his exacting standards.

Over the course of the year, Leshinsky’s tireless reviewing has won him many fans — and a few detractors.

His reviews have mapped out the city’s evolving culinary scene for countless English-speaking residents of the city — as well as visiting family and overseas Jews.

He’s ventured into writing about subjects such as flower hills and doors — but he makes clear that food is where his heart lies.

It’s hard to believe it — the pandemic creates the sense of a time warp — but it’s been more than one year since Shimshon Leshinsky first burst onto the Jerusalem social media scene and began penning his catching reviews.

Most would agree that the city’s English-speaking community has been richer for his contributions.