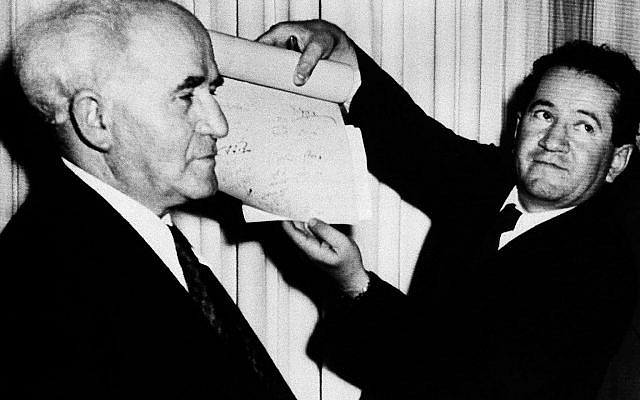 May 15, 1948: David Ben-Gurion, Israel's first prime minister, stands with an Israeli official who holds the signed document which proclaims the Establishment of the State of Israel. (AP Photo, File)

“You have to see the miracles for there to be miracles.”
— “I’ll Give You the Sun” by Jandy Nelson

Years ago, when my husband and I drove through the spectacular Canadian Rockies, I said this of the jaw-dropping scenery: “I need to close my eyes, open them, see the Kansas landscape for a few minutes, then go back to seeing the Rockies. I’ve temporarily maxed out my capacity for wonder.”

This week, I will celebrate Israel’s 70th birthday with all the joy and wonder that a miracle deserves. Because the return to Jewish sovereignty in our ancestral land is a miracle. And if you can’t see that, maybe you’ve grown so accustomed to the miraculous that you’ve become blind to it. Time to step back, close your eyes for a long minute, and regain perspective.

Our return to history as an independent nation after two thousand years of longing was as miraculous as it was unlikely. What other exiled people have done it? What other people have experienced both genocide and rebirth within a few short years? All our nightmares and all our dreams happened all at once.

The miracle of sovereignty brings with it everything: soaring pride in Israel’s existence, it’s flourishing and achievements, alongside searing shame when she errs. The inventors, the poets, the IsraAid volunteers, the peace activists, the doers, and the dreamers are all part of Israel’s story. But so are the criminals, the corrupt, the violent. Israel has both. Every country does.

That duality is part of the miracle.

Statehood means shouldering the enormous responsibility of figuring things out. Making choices. Making mistakes, sometimes grievous ones, in a place where there is very little margin for error. Yet, making mistakes is part of “being a free people in our own land,” ״להיות עם חופשי בארצנו״, as we sing in Hatikvah.

That freedom is part of the miracle.

Sovereignty means there will be tension at times between Jews in Israel and those in the Diaspora. But to focus only on that tension is to miss the amazing moment in which we find ourselves. A little over half the worlds Jews live in Israel, a little less than half live in the US and Canada. Yes, there’s tension, but also opportunity to help each other thrive. I live 7,000 miles from Israel, but I want to play a role, however tiny, in the success of my people’s homeland. I’m hardly alone, among the myriad organizations and individuals who labor on behalf of the Jewish state. And who love her fiercely.

Here in America, assimilation is our greatest threat, notwithstanding the BDS antics that take place on many campuses. David Hazony proposes that “Israeliness”— a vigorous engagement with Israel the people and Israel the place — can can nourish our Jewish souls and save American Jewish life.

Israel and Diaspora have something good to offer each other.

That opportunity is part of the miracle.

And there is this. Statehood was a game-changer.

In The Promise of Israel, Daniel Gordis wrote, “What Israel has done is to change the existential condition of Jews everywhere, even in the United States. Without the state of Israel, the self-confidence and sense of belonging that American Jews now take for granted would quickly disappear.”

My parents grew up in a world without Israel. Anti-Semitism was part of everyday life, so much so that in the mid-1940s, my dad and his brothers changed their surname from “Goldstein” to “Gale.” It was simply too hard to do business with such a Jewish name. When I tell this story to high school students they look at me in shocked disbelief. No one can imagine having to do that.

Today, the 4-year-old great-granddaughter of the man who had to change his name proudly sings Hatikvah, by memory, in perfect Hebrew.

That security, that sureness of who we are, is part of the miracle.

A return to our homeland. A rebirth and flourishing. The successes and failures, achievements and mistakes that come with sovereignty. The freedom, opportunity, and security in who we are.

That’s the miracle I’ll be celebrating this week.