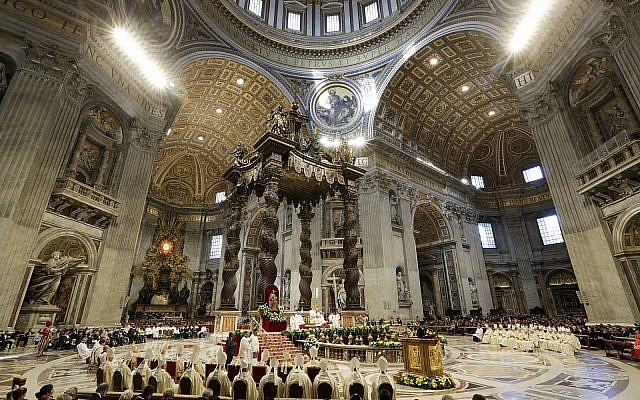 The recent announcement that Pope Francis has instructed the Vatican Archives to open its files on World War II to the public was headline news this past week.  People all over the world saw it as a great act of transparency. And leaders of Jewish organizations welcomed the announcement since they feel that it will help historians clarify the role of Pope Pius XII during the Holocaust.

But will the opening of the archives serve this purpose?

I doubt it. Let me explain why.

In a recent article (in CRUX, March 5, 2019) by one of the most experienced and knowledgeable Vatican watchers in the world, John Allen made this point in no uncertain terms:

Opening the archives will not—indeed by definition cannot—settle the historical controversy about Pius XII and his alleged silence during the Holocaust. That’s because the debate is counter-factual, pivoting not on what Pius did or didn’t do, but rather on what he should have done.

Allen goes on to explain that the debate over the role of Pope Pius XII is a moral one:

You can pile up all the historical facts you like, but in themselves they won’t tell you what Pius or anyone else ought to have done.

For many decades, certain Jewish organizations have been pressing the Vatican to open its archives. Some Jewish professionals in these organizations considered this a major obstacle confronting the Jewish-Catholic Dialogue. I am not one of them. For a long time, I have felt that we need to look more to the future than the past.

Not only that, I saw with my own eyes and heard with my own ears many times over the years what I would call “Vatican-bashing” on this subject. Pope Pius XII was proclaimed guilty of silence and the opening of the archives would prove this, they thought. The Vatican was clearly hiding something about the role of the Pope during the Holocaust, and they needed to be called to account for this.

Even when the Vatican issued its famous declaration on the Holocaust in March 1998—and I was there for discussions with the authors of this document at the Vatican at that time—Jewish professionals who specialized in Jewish-Vatican רelations were not satisfied and criticized the document publicly and even somewhat pugnaciously. They examined every word and every sentence, and thought that the Church did not go far enough, and did not accept enough responsibility for her silence during the Holocaust. It was not good enough for them that the Church made a very profound statement of apology for anti-Semitism over the centuries (which she has since repeated countless times) or that Catholics expressed their sincere feelings that they were in a process of teshuvah on the whole subject.

At the end of the Millennium, the Catholic Church desires to express her deep sorrow for the failures of her sons and daughters in every age. This is an act of repentance (teshuva)… We pray that our sorrow for the tragedy which the Jewish People has suffered in our century will lead to a new relationship with the Jewish People. We wish to turn awareness of past sins into a firm resolve to build a new future in which there will be no more anti-Judaism among Christians or anti-Christian sentiments among Jews, but a shared mutual respect, as befits those who adore the one Creator and Lord and who have a common father in faith, Abraham.-We Remember: A Reflection on the Shoah, 1998, The Vatican

This amazing statement—a product of many years of reflection and deep introspection—was not good enough for some of the Jewish professionals and lay leaders.

Where did all this come from?

It goes back to the famous 1963 play called The Deputy by Rolf Hochhuth, in which the playwright accused the Pope of being complicit in the mass extermination of the Jews through his silence. This became the mantra for some Jewish professionals in the interfaith world for decades, and it is still the working assumption of many Jewish professionals—and Jewish laypersons—and I would argue that this is the main reason that they are happy that the archives will now be open, so that that they can prove the rightness of their claim.

In a documentary film called I am Joseph Your Brother, which my former organization, the ICCI (Interreligious Coordinating Council in Israel) produced in 2001 following the historic visit of Pope John Paul II to Israel in March 2000, we devoted a major section to the role of the Holocaust in Jewish-Catholic dialogue. In the film, we presented a variety of points of view. For example, we presented an interview with Professor Michael Marrus, a distinguished historian of the Holocaust period at the University of Toronto. I will never forget what he said. His words stay with me to this day:

No one really did enough! He repeated this twice. Not only did the Pope perhaps not do enough, but neither did American Jewry, nor the Zionist leadership of the Yishuv (pre-state Israel). Nor did FDR and the American government of the time.  Nor did many others.

I once gave a talk to a visiting group of rabbis to Israel many years ago about the revolutionary changes in the Catholic Church towards Jews and the Jewish People. Some rabbis were impressed. Others were not. One came up to me afterwards and said: “I have heard all this before, and I was even in the Vatican and met the Pope and I don’t believe a word of it.”

It is high time for us Jews to move beyond our prejudices against Catholics with whom we have been engaged in serious, substantive and sustained dialogue for almost 60 years since the Vatican’s proclamation of Nostra Aetate (In our Time) in 1962, which opened an unprecedented era of dialogue that has gone on since then. In particular, it is time to get over our obsession with pointing a finger at the Pope of World War II as if a statement from him would have prevented the Holocaust, when we Jews did not do all that much either to prevent this great catastrophe which befell our people.

We are in a new era. We have moved from persecution to partnership, from confrontation to cooperation. It is time to move forward, not backward.