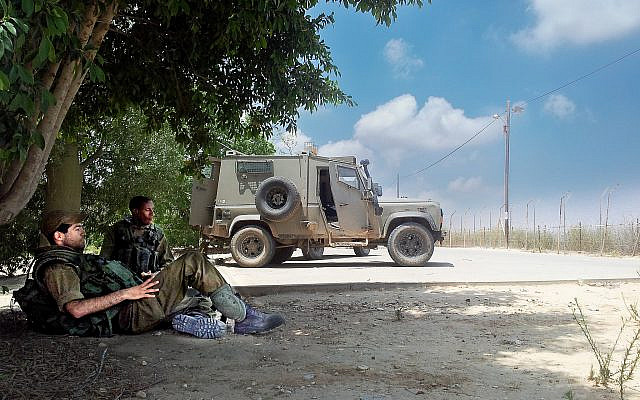 Soldiers on a break, protecting the community on Kibbutz Nirim. (courtesy)

December 27, 2008, Operation Cast Lead broke out. Cast Lead was the first time I truly experienced life in a war zone.

It broke out while I was abroad with my children, in the UK, spending quality family time there, licking our wounds and comforting each other after the very recent suicide of my husband. On the last day there, we got news that rocket fire back home was turning our community into a landing pad for Hamas rockets. With trepidation — but not much choice in the matter — we boarded the plane home. The friend who picked us up in at the airport, confirmed our fears, and the plan was to get home, repack, and leave the following morning.

The incoming rocket warning (Code Red: Tzeva Adom) 10 minutes after we arrived home rendered those plans irrelevant. At the time, we had no safe room in our house, two kilometers (1.25 miles) from the border. Remaining there in that situation, even for one night, was not an option for me. We picked up our two dogs from the neighbor who had been looking after them, threw the dogs and random clothing into my daughter’s car (this was before I had my own car, pre-privatization of the kibbutz), and drove east within that same first hour, without a clue where we would rest our heads that night. True refugees.

Most of the children from Nirim had already been evacuated to Kibbutz Mishmar Haemek, as per the emergency plan that had been put in place by our community a couple of years earlier. However, pets were not welcomed there. Abandoning our dogs was not an option, so we drove away, while at the same time checking our options. As we drove, I made a few phone calls. It was a truly humbling experience to be on the run, asking friends if we could sleep by them, just for a night or two. Just till we could figure it out. Unfortunately, the dog issue was a major obstacle. Finally, my wonderful childhood friend and her husband offered us their apartment in Yaffo, but we couldn’t get the key until the following day. We were able to spend the night with a generous relative who took us in. My youngest traveled to Mishmar Haemek to join his peers, and I stayed in my gilded cage overlooking the bustling flea market and the calming view of the blue Mediterranean Sea.

That operation lasted three weeks altogether. My stepson spent the time working the fields on the kibbutz, and it was from him that I kept up with his safety and the developing situation. Finally, two weeks into it, I broke down and begged him to come bring me back home. Rocket fire had begun to fly mostly OVER Nirim, being aimed at the cities of Ofakim and Beer Sheva, beyond, as opposed to exploding IN Nirim, and I just really needed to get back to my place, my home.

Those short three weeks, which lasted a lifetime, was a period that changed all of our lives. A great deal of my time since has been spent on citizen advocacy for my region, and depicting life on the border in the Facebook group Life on the Border with Gaza, which I had founded prior to this, in talks I give in Nirim as well as a few missions abroad. I even got sent to the UN in person, and addressed the UN Security Council live via Skype feed.

And here we are, 14 years down the road, four more operations that were widescale enough to be formally named, countless escalations and rockets, at least 37 terror attack tunnels and a new underground barrier later. We remain here tenaciously, with our community growing in leaps and bounds, and our resilience still intact. We still pine for the day when our saferooms (which we did NOT have 14 years ago) will be used just as guestrooms; when we can find ourselves closer to to the time when we can live with neighbors with whom we can thrive and collaborate.

About the Author
Born in the USA, Adele has lived in a Kibbutz on the border with the Gaza Strip since 1975. She is a mother and a grandmother living and raising her family on the usually paradisaical, sometimes hellishly volatile border. She moderates a FB group named "Life on the Border". https://goo.gl/xcwZT1 Adele recently retired after 38 years as a teacher of English as a Foreign Language, as well as a teacher trainer and counselor for the Israeli MoE for EFL and a Tech Integration Coach. She blogs here about both Life on the Border, as well as about digital pedagogy, in "Digitally yours, @dele". She is a YouTuber, mostly on the topic of digital stuff. (https://goo.gl/iBVMEG) Her personal channel covers other issues close to her heart (medical clowning, Life on the Border, etc.) (https://goo.gl/uLP6D3) In addition, she is a trained medical clown and, although on COVID hiatus, until allowed back into hospitals, she clowns as often as she can in the pediatric ward in the hospital in Ashkelon. As a result of her activity as an advocate for her region, she was included among the Ha'aretz "Ten Jewish Faces who made Waves in 2018" https://goo.gl/UrjCNB. In November 2018 she was invited to Geneva by an independent investigative committee for the UN to bear witness to the border situation, and in December 2019 addressed the UN Security Council at the request of the US ambassador to the UN.
Related Topics
Related Posts
Adele Raemer