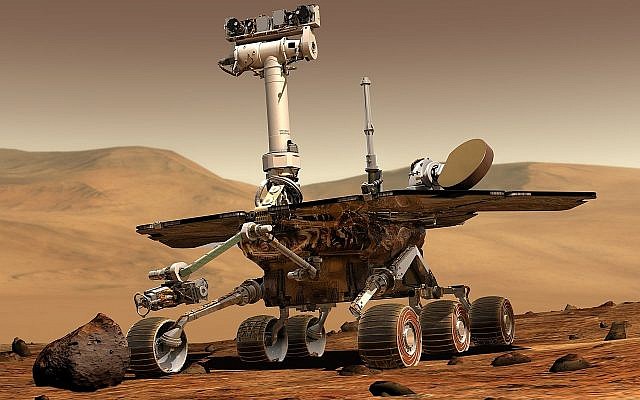 An artist's concept portrays a NASA Mars Exploration Rover on the surface of Mars. Rovers Opportunity and Spirit were launched a few weeks apart in 2003 and landed in January 2004 at two sites on Mars. Each rover was built with the mobility and toolkit to function as a robotic geologist. (NASA/JPL/Cornell University, Maas Digital LLC, public domain)

February 12, 2019 will be remembered as the day that Opportunity died. Humans valiantly tried — more than 800 times over eight months — to engineer a different outcome. They couldn’t. This past Tuesday, the experts logged off their supercomputers, sighed in collective defeat, and issued the requisite media statements. Opportunity is gone.

Opportunity’s demise is a loss, but its achievements exceeded all expectations.

Opportunity was a robotic rover vehicle that launched into Space on July 7, 2003. Six months later, it landed on Mars and immediately began to try to learn as much as it could about the Red Planet. NASA expected Opportunity to operate for around 90 days, during which it should have covered about one kilometer’s distance. Almost 15 years later, it was still operational. Opportunity scoured a whopping 45 kilometer (28 miles) — setting a new out-of-this-world driving record — and sent home over 200,000 images of Mars. It exposed rock and mineral surfaces for scientists to study. Most notably, Opportunity found evidence of water on the planet.

Mars is desolate. Yet, earthlings have been obsessed with it for the longest time. From Ray Bradbury’s 1950s “Martian Chronicles” to the blockbuster movie “The Martian” to Elon Musk’s plan to colonize the planet, we are fixated on our red neighbour. The Tanach alludes to it, the Talmud discusses it and the Lubavitcher Rebbe supported the quest to find life there.

Life was not easy for Opportunity. Operating 56 million kilometers (34.8 million miles) from home, alone in an inhospitable, foreign environment, the rover suffered a number of technical failures.

It narrowly survived a massive dust storm in 2011.

Aptly, the “little spacecraft that could” came to its eternal rest in Perseverance Valley.

NASA had happily spent over $400 million on this unmanned space-jeep. Opportunity is considered to have been wildly successful (they’ve even named an asteroid after it), despite the fact that it only managed to traverse 0.000031% of Mars’ surface area. You can’t help but wonder if it’s all worth it.

Which is why Opportunity reminds me so much of myself. I’ll also pat myself on the back for “grand” achievements that register barely a ripple on the spiritual Richter Scale. I travel a micrometer of personal development and believe it to be Everest. I don’t pause to consider how small a fraction of opportunity I’ve unlocked.

G-d invested a whole lot more in me than NASA did in Opportunity. (How much does it cost to build a human from scratch?) Yes, I beam up the occasional spiritual selfie to Mission Control, but will He consider my efforts a success?

Along the journey, I’ve killed Opportunity, far more often than NASA has. I miss opportunities when I’m distracted, feeling down or simply lazy. Others float by as I complain about a dearth of opportunity. Many opportunities lie buried in the sands of my life-story.

Just over a month before the dust storm that snuffed out Opportunity, NASA launched its InSight Mars lander. I don’t know who chooses the names for these spacecraft, but they seem to be guided by Higher intuition.

When Opportunity dies, you need Insight.

Insight allows you to appreciate that Opportunity never dies. As one disappears, a new one emerges. NASA won’t scuttle their Mars program over the loss of Opportunity. Their next Mars probe is already scheduled for mid-2020. You need insight to grasp that achievement is not measured against an ideal overall goal, but happens each time you move forward.

The Talmud says that you should never believe someone who claims that they have tried and failed. Judaism insists that, as long as we’re breathing, we have the opportunity to find new opportunity. The Torah teaches that loss of an opportunity is merely a chance to rebound with greater growth, commitment and enthusiasm.

Mars remains desolate. There you die alone. You lose your opportunity and it is gone. Earth is different. Fire ravages a forest, but a sprinkling of rain produces green shoots. Where we live, G-d consistently provides new opportunities as the old ones fade. You just have to remain alert enough to see them — and seize them. And, every small step that an earthling takes forward registers in G-d’s book as one giant, worth-it-all leap.