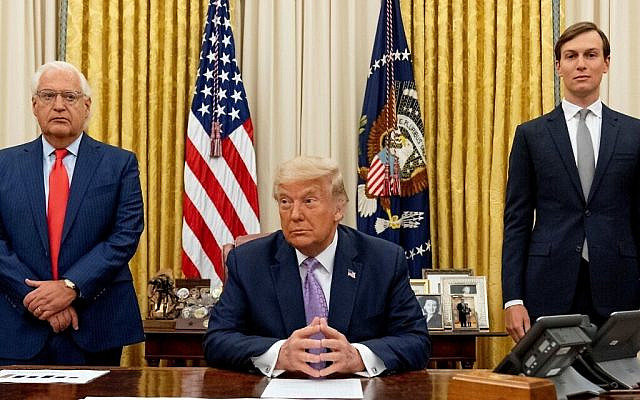 FILE - In this Aug. 12, 2020, file photo, President Donald Trump, center, accompanied by from left, U.S. special envoy for Iran Brian Hook, Avraham Berkowitz, Assistant to the President and Special Representative for International Negotiations, U.S. Ambassador to Israel David Friedman, President Donald Trump's White House senior adviser Jared Kushner, and Treasury Secretary Steven Mnuchin, sits in front of documents in the Oval Office at the White House in Washington. The agreement between the United Arab Emirates and Israel to establish full diplomatic ties comes as little surprise to those closely following the nuances of Middle East politics, and Trump administrationâ€™s almost single-minded push to broker a deal of this kind without a resolution first to the Israeli-Palestinian conflict. (AP Photo/Andrew Harnik, File)

In Why the ‘Libs of TikTok’ founder’s Jewish identity was fair game, Andrew Silow-Carroll argues that identifying a heretofore-anonymous popular right-wing Twitter account holder as an Orthodox Jewish woman was quite justified, for such identification is relevant to the connection between Orthodox Jews and right-wing politics, as part of a significant Jewish communal trend. Coalition for Jewish Values, on whose board I serve, condemned this disclosure (“doxxing”).

While I stand by my organization’s position on the matter, I am from a generation that does not appreciate social media, and I therefore cannot add much to that aspect of the discussion. However, I would like to address Mr. Silow-Carroll’s observations about the connection between Orthodox Jews and right-wing politics in America.

Although he did not endorse this criticism, Mr. Silow-Carroll cited a widely-held belief on the part of some on the Jewish left, as expressed by an anonymous social media writer: “The fact that Chaya Raichik is a orthodox Jewish woman is 100% relevant to the Libs Of Tiktok story. The rapid radicalization of orthodox communities in recent years is dark and twisted.”

Why are so many Orthodox Jews politically to the right? The answer is twofold, but is based on one foundation.

Over the past half-century, American politics and society as a whole have taken a sharp turn to the left. Attitudes of the majority (or of a very vocal plurality) regarding issues of morality, public decency, the economy and tolerance of crime are quite far from where they were decades ago. The result is that those who ascribe to current popular attitudes on these matters view those who have not gone along with the acute liberalization thereof as extreme right-wingers, whereas a generation or two ago, these same “right-wingers” were the norm. Hence, labeling those currently to the right as extreme actually reflects those to the left as having departed from the norm and repositioned themselves in a radically different location on the spectrum.

For most Orthodox Jews, though, the issue is not merely one of politics. Substantive political and social movement to the left in areas of morality (e.g. gay marriage, increasing liberalization of abortion laws), public decency (e.g. legalizing recreational marijuana, and an overall increase in permissiveness and lewdness), the economy (ever-rising taxes and government spending, making it increasingly challenging to stay afloat and support a full family) and crime (rampant in large Democrat-controlled jurisdictions, where most Jewish neighborhoods are still located) – not to mention weakened Democratic support for the State of Israel and outright “progressive” animus thereto – have compelled large numbers of Orthodox Jews to identify with the Republican party and conservative politics in general. When Orthodox Jews sensed that their way of life and dearly-held values were threatened, their political affiliations perforce gravitated to those who more closely identified with their perspectives and needs. Both for pragmatic reasons as well as religious principle, the Republican/conservative approach is a far better match for those who adhere to traditional Torah values, are committed to a secure State of Israel, and seek to raise families in a more wholesome, safe and solvent society.

While there are Orthodox Jews who might get carried away with this and who become overly caught up in politics, coming to view it almost as religion itself and overlooking glaring character flaws and improprieties of their political heroes – as occurs with members of every religious and social group across the board – the phenomenon of Orthodox Jews and right-wing politics should come as no surprise. We Orthodox Jews have stood our ground and remained faithful to our values, way of life and outlook for millennia, swimming against the tide and refusing to follow trends that are not consistent with the Torah’s perspective.

Those who view us as having shifted to the right have themselves shifted to the left and are therefore not able to view us from a truly objective perspective. And those who allege that we have shifted political alliances are not incorrect – but they fail to recognize the seismic political and social changes that precipitated this shift, and more importantly, that our external political realignment is reflective of a firm internal conviction that has not shifted –  and hopefully never will.