The Blogs
Susanna Kokkonen
Speaker on anti-Semitism; the Holocaust; Persecution of Christians
Apply for a Blog
Please note that the posts on The Blogs are contributed by third parties. The opinions, facts and any media content in them are presented solely by the authors, and neither The Times of Israel nor its partners assume any responsibility for them. Please contact us in case of abuse. In case of abuse,
Report this post. 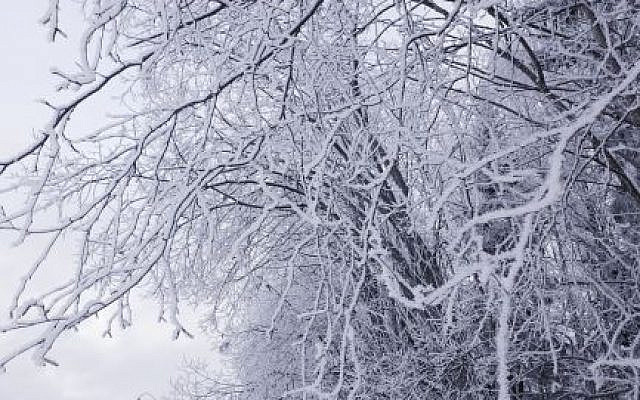 Trees frozen but only for a time. Photo by the writer Susanna Kokkonen.

By many accounts winters during WWII were cold.  In Finland’s Winter War campaign of 1939-1940 snow was a crucial element. It has been said that such a tiny country could win the war because its fighters would move by skis. Skiing like white ghosts, blending into the omnipresent winter white, they could surprise the enemy troops.

Another story: Russian winters were bitter cold and, just like Napoleon’s at his time, German troops could not withstand the long winters. Moscow was their final destination and a catastrophe. Inside the cities of Leningrad and Stalingrad, the brave Russian population was starving for years. Somehow they survived the most unimaginable conditions including winter cold. It is no wonder then that winter of all the seasons is the one we associate with silence, threat and ultimately death.

Our world remembers the liberation of Auschwitz in the wintertime because the date was January 27, 1945. My friend, a Holocaust survivor, was on a death march. She left Germany and lived the rest of her life as a citizen of the free world. But she could never get over what she had seen. Snow, whiteness, winter. Cruelty, endless marching by cold and exhausted feet, fear and death. Winter 1945 was the end but to many, it was a continuation of torment. Later in her life, during each winter she, like a bird, would immigrate to warmer areas. The horrors she went through are unimaginable. Yet, she survived and told her story. Despair was surely close to her but she did not give up.

Lately, I was thinking about these survivors. Then I thought about our ancestors and the way we -our generation- imagine life to be. To many of the generations before ours, life was a source of constant struggle. It was not that one lived for enjoyment. A person might have lived through WWI, the Spanish Flu and WWII. A person might have lived through Nazism and then continued living under Communism. Each event and each system would present a different set of difficulties and hardships. People might have had very short lives, lived those under tyranny and then they would have left the world completely unremembered. Countless lives were lost never to be mentioned in the books of history.

Today, a tiny part of the world -this writer being part of it too- uses most of the globe’s resources. While nameless babies are born and die in the streets of Asia, Africa and Latin America, we lives of ease and luxury. Admittedly, it is true that many of us would like to help. Many have helped. We are not all selfish horrible people. But, interestingly, it is very hard for us to get through a time when our normal everyday pleasures have been interrupted. Is COVID-19 making us more aware of suffering and pain? Is it possible that for once we get a little glimpse of a world that is so unlike ours? Can we appreciate this experience?

Memorial days are made of ceremonies, songs, speeches and such. It is easy to be there and never to commit oneself to anything. This year should be different because our lives have been interrupted. A catastrophe fell on the Jews of Europe suddenly and cruelly. We now know that even our predictable lives can be overturned and changed without a warning. This should give us more sympathy and identification with the events of WWII. It was winter, it was bitter cold and there was no help. Somehow they still mustered the courage to survive. Some survived for us -because they felt they needed to tell their stories. It is our responsibility to re-tell and remember.

There is no predictable life but all life is subject to change. This thought may fill a soul with discomfort and pain. Time and time again I am reminded that in these uncertain times there is One who is always the same. We may not understand His ways. Isaiah 55:8-9: “For My thoughts are not your thoughts, neither are your ways My ways, declare the Lord…My ways are higher than your ways…“. But the only hope for the future is in His Word.

The thought of everything changing is painful but it should encourage us. This winter 2021 is very cold and white and hard. Trees are covered by snow and look dead. The sky appears beautiful in different colors, sometimes it is possible to see even the Northern Lights. But it is the kind of cold beauty that one may admire without receiving comfort to one’s soul.

Yet, we do know that there will be a spring. Every year seasons change. Snow will melt and trees will be filled with tiny green leaves. Trees never died. They rested. It is an idea that works in a physical and spiritual sense. On January 27, we remember the Holocaust. Even as we think of the darkest period in history, our souls should look forward to the spring. Song of Songs 2:12: “The season of singing has come…“.

About the Author
Dr. Susanna Kokkonen, originally from Finland, lived in Israel for twenty years. She has a Doctorate in Holocaust Studies. She has pioneered Jewish-Christian relations including at Yad Vashem, as the Director of the Christian Friends of Yad Vashem. She travels around the world speaking in churches, synagogues and civic gatherings. Her book 'Journey to the Holocaust' is available in Finnish, Swedish and English translations.
Related Topics
Related Posts
Comments