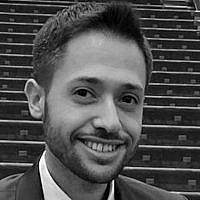 The Blogs
Liraz Levi
Apply for a Blog
Please note that the posts on The Blogs are contributed by third parties. The opinions, facts and any media content in them are presented solely by the authors, and neither The Times of Israel nor its partners assume any responsibility for them. Please contact us in case of abuse. In case of abuse,
Report this post.

In 2001 Hamas started to launch and shoot rockets to the south of Israel. At first, the Israeli government didn’t take the threat seriously, due to the fact the rockets fell in open areas, with no losses of lives. However, after innocent civilians were killed from rocket fire, Israel activated the ‘red color’ alarm system in order to alert citizens from an attack. In addition, they placed many shelters in cities and localities close to Gaza. Following the disengagement from Gaza, Hamas gained political power through local electoral victories, which enabled it to increasingly terrorize Israel via rocket fire expanding in quantity and range. Israel’s reaction was many military operations in order to destroy Hamas’ infrastructure, munitions, and kill targets. Furthermore, it purchased technological anti-missile systems such as the “Iron dome”, which serves as a counter-terrorism tool against Hamas’ rockets. Since then, Israel is facing an ongoing “ceasefire” with Hamas, which is violated when Hamas chooses to shoot missiles or send explosive balloons which cause property damage and threaten lives in Israel.

The ongoing situation creates an impossible reality, which affects citizens psychologically and financially. Most importantly, Israeli citizens don’t have a sense of security living their life in their country. The major causes of the problem is the lack of deterrence Israel has towards Hamas, which was lost in recent years. It faded away slowly after operation ‘Protective Edge’, to the point Hamas does whatever it wants and choose when the next battle will occur, when it escalates the situation, and when ceasefires are called. All of which is a primary tactic in Hamas; attrition war. All together this creates an ongoing status quo situation, which has to end.

Israel’s current policy can be described as achieving maximum deterrence with minimal effort. Israel has built his policy under the doctrine of deterrence through self-fortification. The main tool to in this policy is the ‘Iron Dome’ system. This method was proven as successful; it has eliminated the need for military operation on ground and protects the Israeli citizens. However, the major flaw in this policy is that it hands the leverage over to Hamas as they are the ones who dictate when the next escalation will occur due to the fact, they’re not threatened by Israel’s counter strike, showing there’s no more deterrence. A familiar pattern arises as Hamas launches a few missiles, usually there are no consequences from Israel’s side. And when a massive escalation occurs, Israel responses with air strikes in order to destroy Hamas’ combat means and infrastructures. After, ceasefires are negotiated, and the fire temporarily stops. Sometimes, Israel responds with humanitarian sanctions, but there is no clear nor consistent procedure for this aspect.

The current status quo prevents causalities in the battlefield and is drastically cheaper than a collective military operation. It will not risk soldiers and can save lives. However, this strategy is making Israel lose its deterrence in the conflict. Therefore, a change in the policy is needed in order to offer a better future.

One alternative is an extensive military operation just like operation ‘Protective Edge’. Israel will be able to hit crucial targets of Hamas in Gaza without conquering the area, leaving it after to rehab the mass destruction. It’ll give an option to the Palestinian authority to try and gain back political control in Gaza, although it’s not certain, and will renew Israel’ deterrence on the other side. However, the disadvantages are that many soldiers can die in battle, and that Hamas will use the next few years to get equipped once again and collect ammunition. Easily, Israel can find itself at the same starting point.

Another option is to use this operation in order to eliminate the threat of Hamas once and for all by achieving decisive victory. It’ll result with having a military control in Gaza, or delivering it to the control of the PA, which is irrelevant as well. Israel can find itself in a bigger problem, in which IDF will be much more exposed to the ‘enemy within’. Oppressing citizens will create frustration and soon, new revolt will arise, not to mention Israel’s worldwide image in such a scenario. Same applies if the PA will control the area. Soon enough, new terror organizations can arise. In addition, there is no need for Israel to carry the responsibility for Gaza, its rehabilitation and its citizens, especially in days in which it is facing with an economic crisis due to the Covid-19 pandemic.

Therefore, Israel should keep its current strategy against Hamas, but ‘upgrade’ it in order to bring back the deterrence. Israel should think for the long run, and should build a formative structured plan of detriments and benefits with different stages. Whenever Hamas is violating the ceasefire, Israel will act with the first detriment. If an escalation occurs to the point it reaches to the second agreed stage by the plan, Israel will use other elements as well to oppress the terror attacks, such as siege, minimizing outside aid, and creating pressure on Hamas from Gazan citizens. On the other hand, whenever a ceasefire is kept for a certain amount of time, which was predefined, Gaza will benefit from that. Israel will support it as a gesture of good will, helping with medical aid. If the ceasefire will hold for longer, making it to the next predefined point of time by the plan, Israel will supply other needed aid as well. This way, Israel will be able to “re-educate” Hamas, making it to play by its rules and earning worldwide support, using transparent, well-known plan, which is clear to all. The deterrence will be earned again, but only if Israel will stick to the plan in each and every collision with Hamas. The main obstacle which can cause failure to this plan is being inconsistent, and reacting differently every time.

If Israel will follow this strategy consistently, it can actually promote more of a conciliatory attitude between the two sides, serving as the first step to regulation and to a bright future. That being said, Israel should remember Hamas is still a terror organization. Thus, it should keep its intelligence efforts, collecting information in order to prevent the element of surprise in the future. Israel’s solid, transparent plan can serve as preliminary draft to truce, which hopefully can bring back the peace process to the table. Most importantly, it’ll eliminate Hamas’ threat.

About the Author
Liraz was born and raised in Israel. After serving as an analyst in the IDF, he worked for four years at a Jewish summer camp in Wisconsin. In 2015 Liraz moved to New York to serve as the Jewish Agency Emissary at the Jewish Federation & Foundation of Rockland County. At IDC, Liraz is a third-year government, diplomacy and strategy student and participates in the Honors' program Argov Fellowship for Leadership and Diplomacy. He also took part in the MICS (Media in Conflicts Seminar) and the ISCA (Israeli Students Combating Antisemitism) programs. In addition, he participated in the Ambassadors Club and the StandWithUs fellowship. He speaks Hebrew, English, Spanish and spoken Arabic and is interested in pursuing a career dealing with Israel's international relations and worldwide image.
Related Topics
Related Posts
Comments