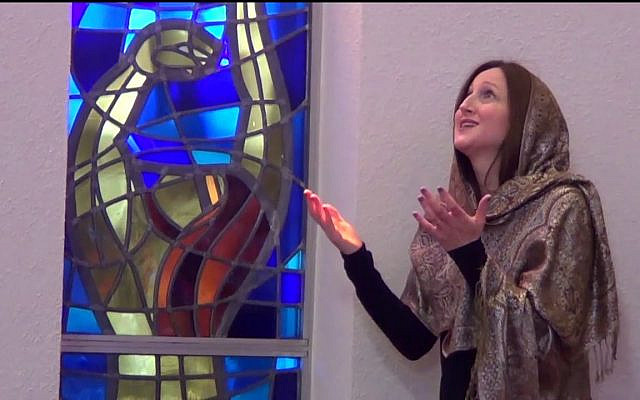 If the only stories we learn are Anne Frank’s and Elie Wiesel’s, then we will have a very shallow understanding of the Holocaust. There is a richness and a visceral connection to the stories of Frank and Wiesel, but these are but two among a galaxy of stories that comprise the individuals who experienced the Holocaust.

Until now, we have been able to access that richness and visceral connection by listening to Holocaust survivors tell their stories. With the survivors dying, we must take up the mantle. How do we do that? How do we make the Holocaust relevant to the next generation, who will never meet a survivor?

We must find a way to integrate their stories into our own stories. We must find our place in the story of the community that experienced the Holocaust.

Illuminating communities through a mosaic of stories

“A community happens because the individual passions of many people combine into a beautiful mosaic. Through the stories of the past, we understand our history and the communities that are lost across time. By telling the stories of the individuals in those communities, we piece together the beautiful mosaic that shows us the entire community in all its depth and complexity.”[1]

In the shallow understanding of the Holocaust that is often portrayed, all Holocaust stories go through Auschwitz. I once heard about a survivor who told the archivists at Yad Vashem that she had been at Auschwitz. Her story did not seem to make sense to them, though: the town from which she came had not been sent to Auschwitz. When they delved deeper, she revealed that she had been a hidden child. She had found over time, however, that people did not consider her to be a true “survivor” if she had not been at Auschwitz. So, she changed her story.

Many survivor stories can be found in video and text, but there is something lost in those media. Listening to a survivor speak has a power that watching a video or reading a book does not. How can we recreate that visceral connection without living survivors to tell the stories?[2]

Based on the Goucher class, Jennifer and I are developing an innovative program on telling Holocaust stories, where we are learning the stories in a different way.  Some of us will tell stories heard from survivors. Others will use the means that we will have after the survivors are gone – written documents and recordings. We will be teaching adults and high schoolers to tell these stories in their own voices.

As her partner in this endeavor, I am Jennifer’s model for our first workshop. Jennifer is teaching me how to tell a Holocaust story in advance, so that I can serve as a example for the other participants. I chose a story I’ve discussed here before – the story of Yitzhok Rudashevski.[1]

I first discovered Yitzhok when I was writing the Yom HaShoah ritual.[4] I was looking for a quote about the hardship of the ghetto and found this one from a teenager in the Vilna ghetto: “I feel as if I am in a box. There is no air to breathe.”[5]

Much later, as I was writing about the strength of Jews in the ghetto, I found another perfect quote: “I have such a rich life of intellectual work, I often forget I am in the ghetto.”[5]

Then I discovered that this was the same teenager who had said the first quote!

When Jennifer asked me to pick a story to tell, I knew it had to be Yitzhok’s. His story embodies what I teach – the strength of the Jews to find life and light amid death and darkness. The more I read of his diary, the more I know it is the right story for me to tell.

Our individuality meets theirs

Each of the people who will be participating in this program will chose a story that speaks to them. My husband Michael has selected his already. Michael is an engineer, an inventor, an intellectual. The story he picked is one that speaks to him – the story of Viktor Frankl.

Frankl was a young psychologist, writing his thesis, when he was taken to the camps. His manuscript was hidden under his coat. It was taken from him, of course. He spent his time in the camps rewriting it in his head. When he came out, he wrote it in a book that is both memoir and philosophy, Man’s Search for Meaning. Those who have a “why” to live, Frankl wrote, can bear almost any “how.”

I love Michael’s choice for two reasons. First, it is a marvelous match to Michael’s personality, the story of a man who dealt with hardship the same way Michael might have. It is also a story that most people would not expect – the story of how an intellectual survived the camps in his own, unique way.

My 17-year-old daughter Rebecca is fascinated by a story she heard about women in Majdanek. In the midst of a horrific situation, the women would gather nightly to tell each other stories and jokes, to dance and sing, to try to keep their spirits up. This story spoke to Rebecca, to her own struggle with depression: if these women could find hope in darkness, perhaps she can too. When it comes her turn to pick a story, Rebecca will seek out the story of one of these women to tell.

The mosaic of the community

We can now see the mosaic of the community beginning to form: the story of Yitzhok Rudashevski, a teenage writer who lived in the ghetto and died in the killing pit; the story of Victor Frankl, a young psychologist who lived in the camps and survived to influence the world; the story of the women in Majdanek. Two of our participants will tell the stories of their mothers: one a hidden child, the other a survivor of the St. Louis.

What other stories will we choose? Each person in our program will tell a different story. They will select a story of the Holocaust that calls to them and, as Jennifer says, “breathe themselves into it.”

What if everyone chose a single Holocaust story, one that spoke to them individually?

As each of us tell our story to another, and to another, all of us will see the mosaic of the community growing brightly before us. We will tell a story of the Holocaust that is more complete, has more depth, and maintains its power as we move into the first generation without survivors.

What story will you pick?

[2] The USC Shoah Foundation has been solving this in an innovative way – by making interactive holograms of survivors. See sfi.usc.edu/dit.

[4] Light from the Darkness: www.teachtheshoah.org/ritual