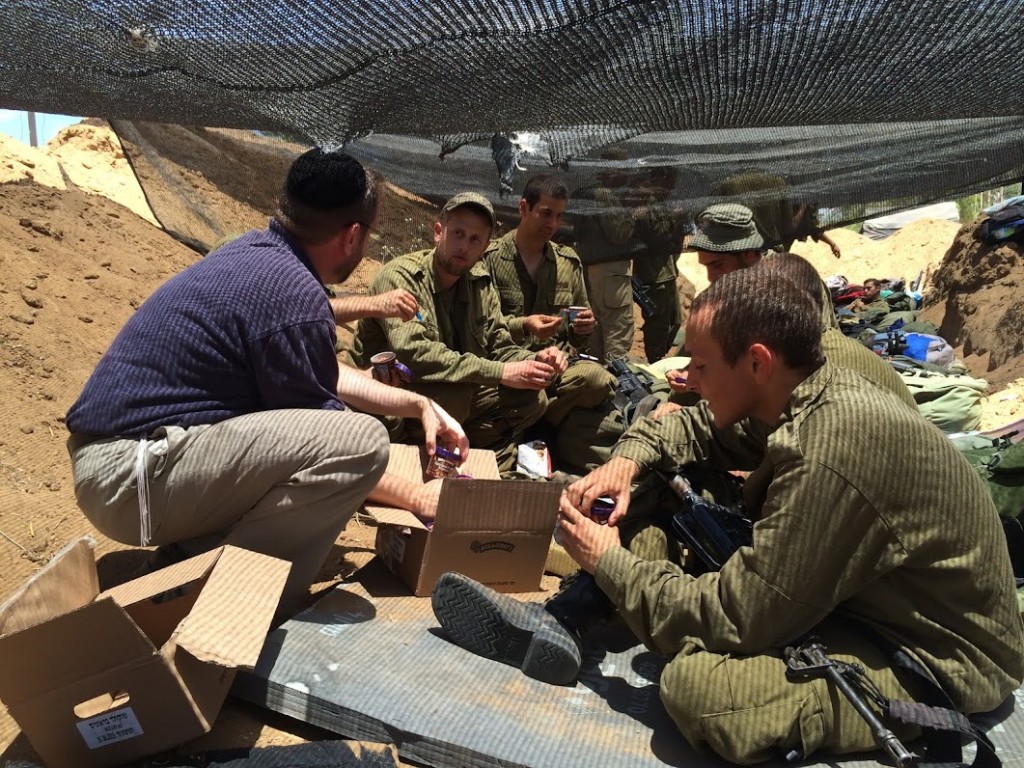 They are our brave and heroic soldiers. But they are also our children.

It was an honor to meet our soldiers at the Gaza border where I hand delivered close to 1,000 cups of ice cream thanks to donations from friends in Silver Spring, MD. I thanked them for protecting us and wished them a safe and successful operation. 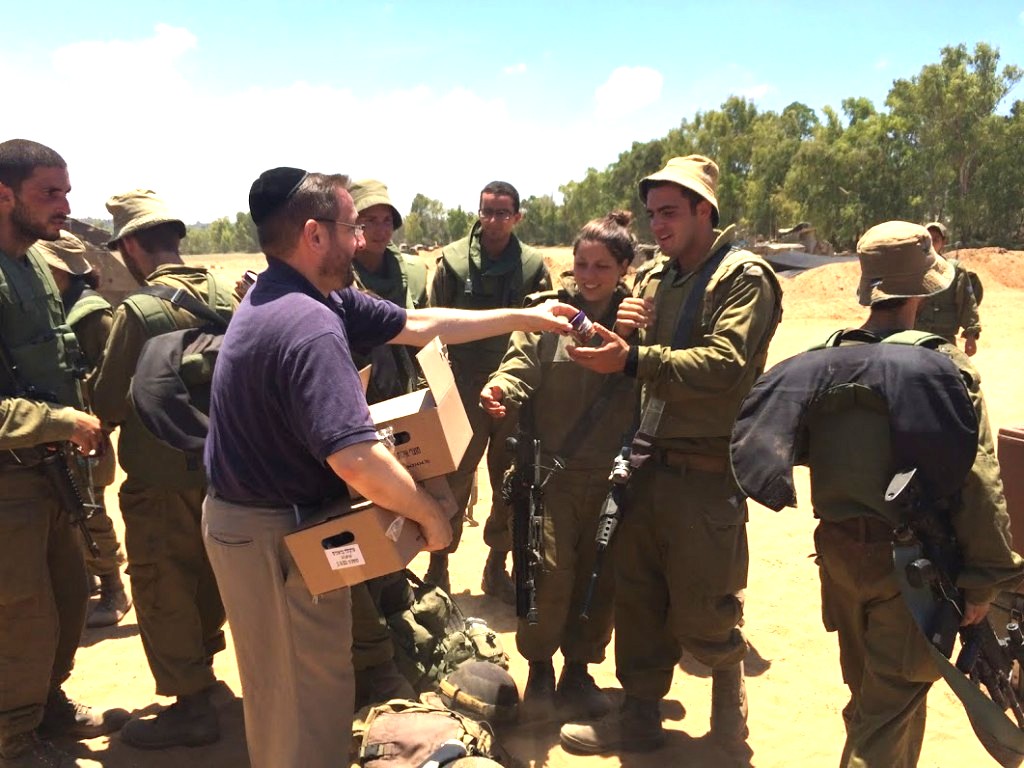 One particular group was gathered in a circle around their commander as they were preparing to march into Gaza. The commander asked me to give out the ice cream after he finished giving his orders. These were 18, 19, and 20 year old boys being sent into the line of fire to protect our country. They had a look of resolve and determination with a maturity beyond their years. And when I asked “Who wants Ben and Jerry’s ice cream?” I was thrust back into reality. They reacted with the same excitement and enthusiasm as teenagers. I felt a burst of pride to see such wonderful children that have been raised in our country – children who are thrust into early adulthood with the most important of responsibilities on their shoulders, and accept that responsibility with honor. 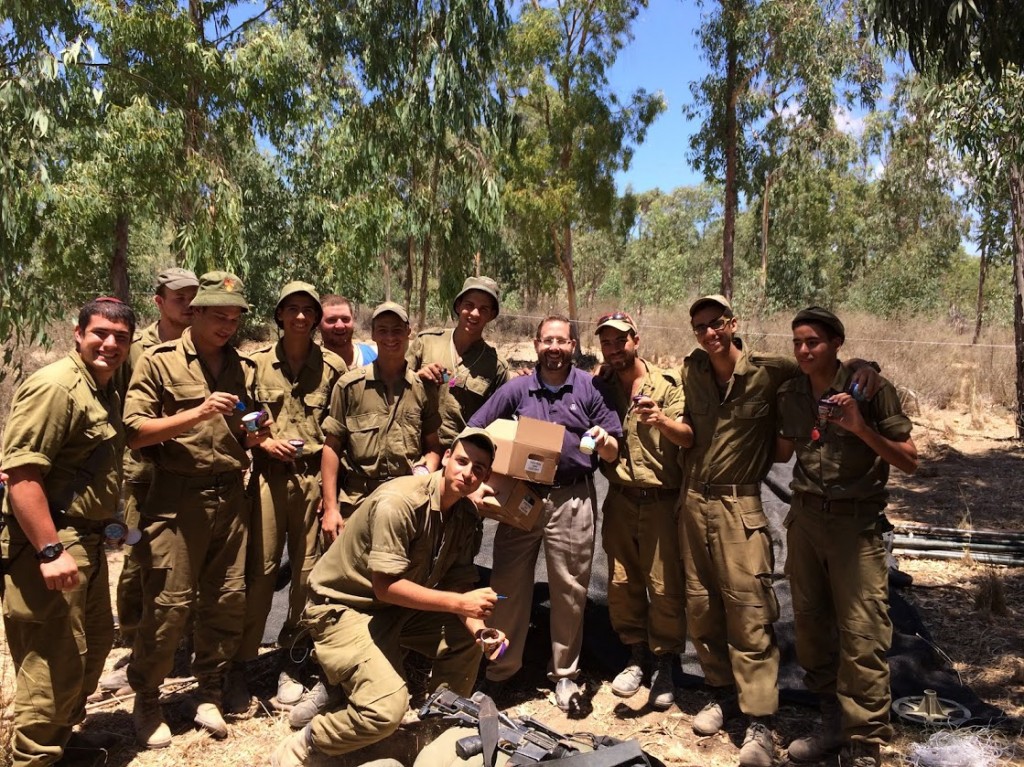 To understand how hard these young soldiers have been working, I will share a question one of them asked me: “Is today Thursday or Friday?” After days of training and the launch of the ground operation which they called “an awful night” they were resting, and preparing or another difficult night. I told them it was Friday and began handing out ice cream cups. Their reaction was sheer joy. All their fears and exhaustion disappeared for just a moment as they were so happy to eat some cold, sweet ice cream. And, even more importantly, thrilled and filled with renewed energy that others were thinking of them – both in Israel and overseas. 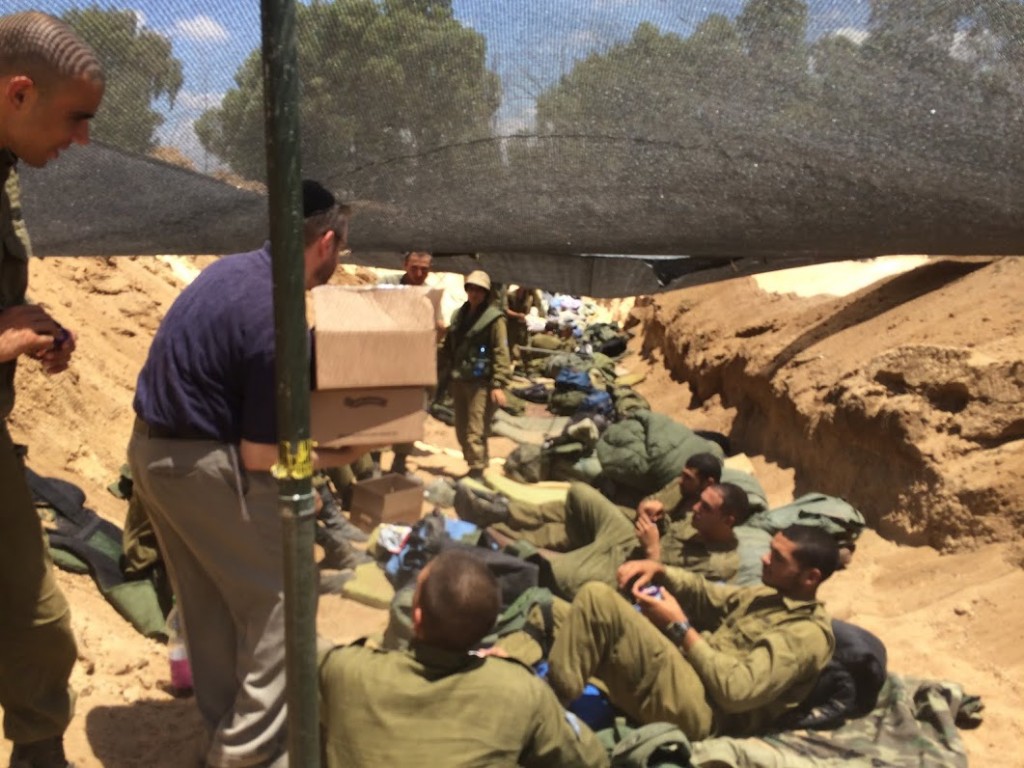 There was another moment which demonstrated a second dimension to why our soldiers are so special. As I approached some tanks and offered the commander ice cream, he said “first give to my soldiers.” In the Israeli army, commanders usually go first withe call “acharai” – “follow me.” But here, he did not want to go first. The man in charge who could sit back and enjoy some ice cream while his soldiers are preparing their tanks instructed me to first give his soldiers. That is the way it works in the Israel Defense Forces. The commander’s job is to take care of his soldiers – by leading them into battle, and by making sure there is enough ice cream for them before he takes. And in turn, the soldiers see this model of leadership and learn what it means to bear responsibility and to lead. 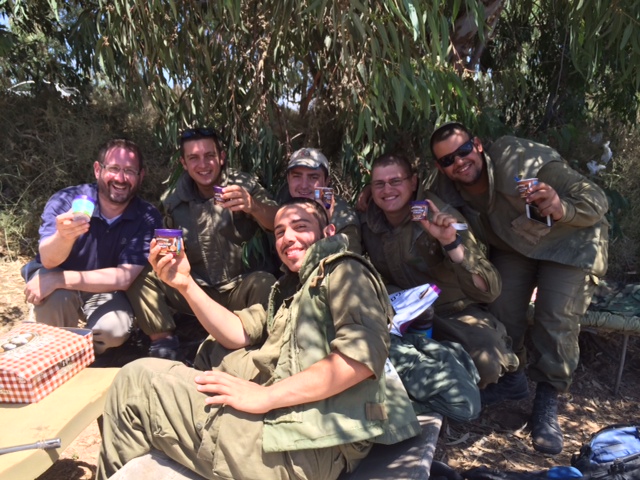 A group of soldiers who returned from a difficult first night of backup work for the combat units who were located deeper into Gaza asked me to pass along a message to the chairman of my party, Finance Minister Yair Lapid. They said, “Say hello Yair and thank him for his responsible leadership.” These young men just finished a very hard night. Yet, they had the presence of mind to ask that a message be sent to a government minister to thank him for giving them the confidence they need to carry out their mission.

I am happy to report that while our soldiers may have been disoriented about the day of the week, they know what is important, they are focused and they are ready for the challenges that lie in the days ahead.

These are OUR brave soldiers. And these are OUR children who simply love a little ice cream.

May God bless the soldiers of the IDF.

Advertisement
About the Author
Dov Lipman was elected to the 19th Knesset in January 2013. He is the author of seven books about Judaism and Israel, and holds rabbinic ordination from Ner Israel Rabbinical College and a masters in education from Johns Hopkins University. He has been at the forefront of combating religious extremism in Israel and is a leader in efforts to create Jewish unity both in Israel and around the world. Former MK Lipman is invited to speak on behalf of the Jewish state both in Israel and around the world and serves as a political commentator for i24 News and ILTV. He currently serves as Secretary General for the Confederation of United Zionists.
Related Topics
Related Posts
Comments