I may have mentioned once or twice in these columns something about Ezra, Aviva, and Liora — my three beautiful, smart, wonderful, mischievous, terrific, adorable, delightful, clever, cute, impish, and amazing grandchildren who live in Canada.

Okay, so it may have been more than once or twice.

And while I’m aware that there’s a redundancy or two (or three) in those adjectives, since truth is the seal of God, and my refrain as a litigator was “the truth, the whole truth, and nothing but the truth,” I gotta call ’em as I see ’em. So, Joanne, put your blue pencil down and leave in every single one of those adjectives. [EDITOR’S NOTE — WASN’T THINKING OF TOUCHING THEM.]

All three grandchildren, though, were born before I began writing this column/blog, and thus their births never received their proper due. That’s not the case, though, for my newest grandson — Aiden Murry (Meir Eliezer) Glenn — born to Gabrielle Kaplan Glenn and Allen Glenn on November 26, 2020 (10 Kislev 5781) at 12:06 a.m., weighing in at 6 lbs, 1.5 ozs. A Thanksgiving gift like no other; a grandchild whose bassinet overlooks the Brooklyn Botanical Gardens and for whom, therefore, no passport will be needed for grandparent-grandchild visits.

2020 has been, by any definition, an annus horribilis. We’ve suffered the effects of a modern-day plague in deaths, in sickness, in loneliness, in loss, in hardship, in deprivation, in broken connections. The economy is iffy and education a mess, businesses and jobs have cratered, friendships strained, relationships stressed.

We’ve found it difficult to give adequate support in times of sorrow, as we can’t hold a hand, give a hug, or speak in silence with our physical presence when words are insufficient. We’ve missed davening together as a community; we’ve been unable to sit around the table with friends and family, sharing meals, stories, discussions, divrei Torah, and even political opinions. We also feel deep pain at having lost the opportunity to celebrate, in each other’s presence, our special occasions — those singular and profoundly meaningful personal rites of passage. And though glimmers of hope are beginning to peek through the darkness, too much darkness sadly remains.

And then Aiden appeared on the scene, as did many others under different names, each as beautiful and cherished to their family as Aiden is to ours. Suddenly the gloom lifted, the sun shone though, optimism reappeared, joy and gratitude overflowed in our hearts, and it became hard — nay impossible — to stop smiling behind our masks, and above our masks, with our eyes.

Eight days after Aiden’s birth, we celebrated his brit. The ceremony was, of course, Covid compliant — a small, socially distanced, and masked morning minyan at Congregation Ahavath Torah in Englewood, followed by the brit itself, a few eloquently moving words spoken by the radiant and beaming new parents, and, for our guests, take home breakfast boxes and coffee to go. A year ago, unthought of; at this time and for this baby, just right.

A few words about his name. Aiden Murry/Meir Eliezer was named after his great-grandfather, Sharon’s father, Rabbi Murry Penkower (hence the lack of an “a” in Aiden’s middle name), a congregational rabbi for 50 years who lived to the age of 87, and his great-great-uncle, Avraham Meir Eliezer Golembiowski, the youngest brother of Zayde, Allen’s paternal grandfather Henry Glenn, who blessed us with his presence at the brit. Avraham Meir Eliezer was tragically murdered at the age of 9 in Treblinka in August 1942.

As Gabrielle and Allen noted, Aiden was “named after two people, one a great man who lived an unbelievably rich and vibrant life, and one just a young boy who had a life full of potential still ahead of him.” As I heard those poignant words, I thought they summed up, in a certain sense, so much of Jewish history. The record of our People is comprised of many great men and women who lived rich and vibrant lives, filled with love of and devotion to family, Torah study and observance, culture, education, and chesed; long and full lives dedicated to the betterment of their families, communities, countries, and the world. But our past also includes all too many whose lives, so full of potential, were horrifically cut short by massacres, pogroms, exterminations, and destruction. Aiden Murry/Meir Eliezer encapsulates that complex and multifaceted history in one beautiful 6-pound bundle of unmitigated joy.

There was even a tiny silver lining to this Covid-era brit. While those present in the shul were significantly limited in number, we were joined over Zoom for the ceremony and for post-ceremony chat by numerous friends and relatives (more than 100 screens, some with families sitting around the computer). Many, of course, were local. But numerous others were far-flung — from Israel to Canada, from Atlanta and Boston to LA and San Diego — and would not have been able to participate in a “normal” year. (A special shout out to our California friends who rose before 5:15 a.m. PST to be with us.)

We pray, of course, for normalcy to return; for a time when the only limit on the number of attendees will be the size of the venue and the depth of our pocketbooks; when hugs and kisses and singing and dancing once again will be the norm. (Oh how Zayde so very much wanted to dance with his cherished new great-grandson, grandchildren, and children, our wonderful mechutanim Marla and Ray, and we know he was dancing with them joyfully in his heart.) But we also hope that in this future normal, Zoom will remain for those who cannot participate for reasons such as distance or health.

Aiden’s Thanksgiving Day birth gave us so very much to be thankful for. While “We Gather Together” originally was a Christian hymn, it has morphed over time into a secular one, sung around Thanksgiving tables in homes of Americans of all faiths and of no faith; tables groaning under the weight of stuffed turkey bathed in gravy and sweetened with cranberry sauce; tables laden with soft pretzels, yams, glazed salami, and sweet potato and apple pies. (Some of those are Kaplan/Penkower/Rosen Thanksgiving specialties.) Sharon and I learned that hymn in the yeshivot we attended, sang it at family Thanksgiving dinners of our youth, and continued to sing it with our children and grandchildren as we grew older.

On Thanksgiving Day, 2020, though Sharon and I sat down alone to our Thanksgiving dinner in Teaneck, we weren’t really alone; rather, we were joined — again over Zoom — by many of those in our family with whom we traditionally gather on Thanksgiving, including, among others, Gabrielle and Allen and the then as-yet-unnamed Baby Boy Glenn and Aiden’s doting aunts and uncle Micole, Daniele, and Raquel and Jason, and his very excited older cousins. No, we didn’t sing We Gather Together this year — anyone who has ever tried to sing over Zoom knows that the time lag makes communal singing hilariously discordant. Yet all, I’m sure, were thinking about and living its words.

We were, indeed, gathering together to ask the Lord’s continued blessings; we were thanking Him for the blessing granted to us that very morning. We were singing praises to His name; we were exalting that we were not forgotten in this year of plague and gloom — and now, in this year of Aiden Murry/Meir Eliezer Glenn. Our cherished Thanksgiving gift. 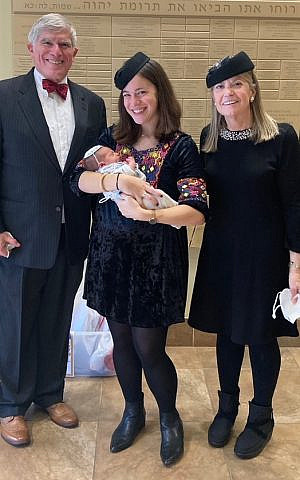 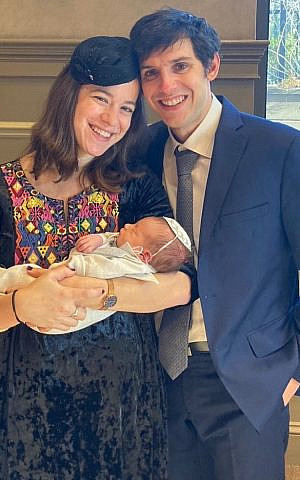 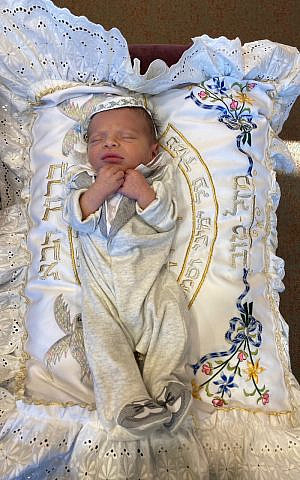 Thinking about the threats to our democracy
Joanne Palmer

‘Run. Get away from the Capitol!’
Steven R. Rothman