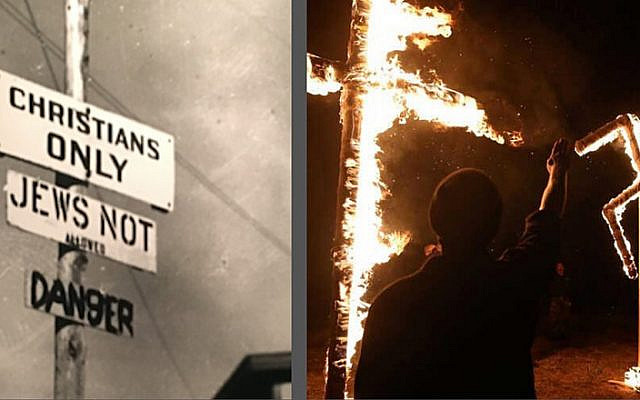 What the Talmud says about the reason for Anti-Semitism

Why do they hate us so much?

It’s the most irrational hatred, and it rears its ugly head practically everywhere. Now closer than ever before we see anti-Semitic violence on the streets of New York City and South Florida in ways we thought impossible.

We have never found a good reason for this hatred.

The Israeli Ambassador to the UN walked out of a UN meeting this week when the Palestinian envoy made an impassioned speech saying that Israel has no right to defend herself! You simply can’t make this stuff up!

But the Talmud actually makes it abundantly clear why they hate us. It’s been clearly written, black on white, for over 2000 years:

The Talmud (Tractate Shabbos 89) cites the source of anti-Semitism using a play on words: The Torah was received at Mount Sinai.

The Hebrew pronunciation of “Sinai” is almost identical to the Hebrew word for “hatred” – Sinah. “Why was the Torah given on a mountain called Sinai?” asks the Talmud. “Because the great sinah – the tremendous hatred aimed at the Jew – emanates from Sinai.

Simply put— they hate us because G-d chose us.

Identifying the illness is halfway to finding the cure. Once we’re able to understand the source of anti-Semitism, we can start to formulate a plan to overcome it. And indeed, when we look into the pages of our rich and miraculous history, we find a surprising pattern of how our ancestors outlived the lineup of anti-Semites that they faced.

Two thousand years ago, the evil Roman Empire had prohibited Torah study. Pappus the son of Yehuda came and found Rabbi Akiva making large public gatherings and teaching Torah. Pappus said to him: “Akiva! Aren’t you afraid of the authorities?” And Rabbi Akiva replied: “I will give you a parable.”

“A fox is walking along a river. He sees the fish frantically scurrying from one place to another.

He says to them: ‘From whom are you running?’
‘From the nets and traps of the fishermen.’
‘Why don’t you come up to the dry land, and we will live happily together, just as our forefathers did!’

Rabbi Akiva concluded: “If life is tough as we are sitting and studying Torah, about which it is written, ‘It is our life and the length of our days,’ how much worse it will be if we cease to study Torah.”

It was clear to Rabbi Akiva that a life without Torah would result in spiritual death for himself and his people. Instead of cowering away from his Torah study, he intensified his efforts. Whilst he himself was eventually executed for his crime, his students, the Nation of Israel, accomplished the impossible by proving to be the only nation that survived and outlived the mighty Roman Empire!

When Esther and Mordechai found themselves facing the threat of national annihilation from Haman in the Purim story, they prepared by calling for a three-day fast during which the Jews repented their ways. Mordechai then gathered 22,000 Jewish children to teach them Torah.

Once they understood that the cause of the anti-Semitic decree was not Haman himself, but as a test from Almighty G-d, they redoubled their commitment to Torah and to G-d and ultimately experienced the greatest turnaround of events that became the Holiday of Purim.

Each and every single one of the miraculous survival stories of our nation’s history has an element of powerful spiritual awakening. Because our ancestors knew that the cause of anti-Semitism is a test from G-d—and boy does He know how to get our attention! Only strengthening our connection to G-d through Torah and Mitzvos will carry us through to the finish line.

This does not mean that we don’t need to exercise diplomatic efforts and train an effective and efficient army. G-d himself tells us to do so. But if we place our trust in the army or the politicians exclusively then we have shown our true colors and failed the test miserably.

Thus declares King David, the great warrior of Israel in Psalms: “If G-d doesn’t protect our homes then the guards at the door will be rendered useless.” Hearts filled with faith coupled with guards to the teeth, is precisely what we need to find the victory that we so desperately seek.

You can shout down the TV and send angry letters to political figures and newspapers. But doing so exposes your belief that the person, not G-d, is the ultimate decision-maker.

I know it’s a tough pill to swallow, but the undeniable fact is that no other theory or remedy to anti-Semitism has ever worked! Thinking that we can somehow change the hearts and minds of those that hate us so virulently is the very definition of insanity.

Perhaps it’s time for us to apply this novel approach, which is actually not so novel at all. It’s been the secret of Jewish survival for 4000 years and we had better apply it before it’s too late!