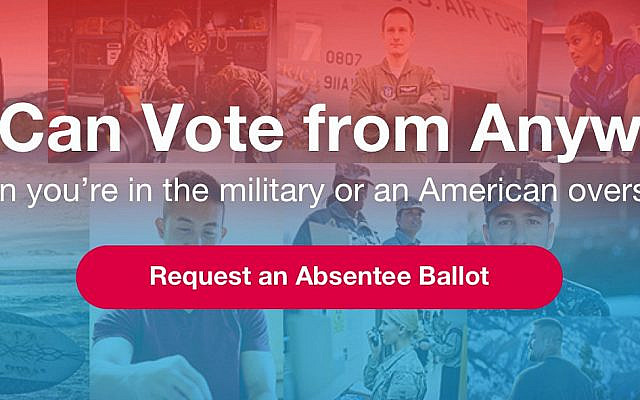 U.S. citizens can vote even when living abroad. “Voting is one of our most fundamental rights as U.S. citizens.” FVAP (Federal Voting Assistance Program).
Overseas citizen voters face a specific set of voting challenges that differ from domestic voters. Elections are managed individually by 50 States, U.S. territories (American Samoa, Guam, Puerto Rico and the U.S. Virgin Islands) and the District of Columbia. This means there are 55 different sets of rules for absentee voting overseas citizens.

According to FVAP’s 2016 Overseas Citizen Population Analysis Report, there are approximately 5.5 million Americans living overseas and 3 million of them can vote. Thirty-eight states, plus District of Columbia allow U.S. citizens who are 18 years or older and were born abroad, but have never resided in the United States, to vote absentee using their parents last address in America.

The Federal Voting Assistance Program (FVAP) works to ensure overseas citizens are aware of their right to vote and have the tools and resources to successfully do so – from anywhere in the world. They assist voters through partnerships with the Military Services, Department of State, Department of Justice and election officials from 50 States, U.S. territories and the District of Columbia.
The Director of FVAP administers the Uniformed and Overseas Citizens Absentee Voting Act (UOCAVA) on behalf of the Secretary of Defense. UOCAVA, as amended by the Military and Overseas Voter Empowerment (MOVE) Act, requires States to transmit requested absentee ballots to UOCAVA voters no later than 45 days before a federal election.

To successfully vote absentee
1. Register to vote and request an absentee ballot by filling out the Federal Post Card Application (FPCA), and sending it to your election office. Your last residence in America is your voting address and determines your voting district, or precinct. Mailing address is where your currently reside.

2. Many states allow you to submit your FPCA electronically and all states allow for at least one form of electronic transmission of your blank ballot. It is suggested you request your ballot via email since mail delivery times will vary based on where you live.

4. Absentee ballots are transmitted 45 days prior to the election. If you requested your absentee ballot and haven’t received it from your state at least 30 days before the election, you can use the Federal Write-In Absentee Ballot (FWAB). This backup ballot can be completed using FWAB online assistant. Complete, and return your voted absentee ballot to your elect office on or before your State’s deadline. Using electronic options can help reduce the ballot transit time for your election materials. If your state requires you to mail your ballot, allow enough time to account international mail delivery.

Don’t wait until the last minute, register today.  By voting, you can HIRE or FIRE elected officials. The choice is yours; shall you speak up or allow others to speak for you?
I look forward to helping you with the 2020 Election. If you would like more information, or need help with the absentee voting process, I can be reached at votingfromabroad@gmail.com

About the Author
Andee Goldman moved to Israel in 2006 from Las Vegas, Nevada. Since 2008, as a nonpartisan, she has volunteered helping American overseas to vote in America's Federal Elections. YOUR VOTE IS YOUR VOICE https://www.nass.org/can-I-vote As an Israeli, she has become a history buff and enjoys sharing her experience and travels around Israel and the world!! Andee is available to answer your voting questions at votingfromabroad@gmail.com
Related Topics
Related Posts
Comments