The Blogs
Ross Singer
Apply for a Blog
Advertisement
Please note that the posts on The Blogs are contributed by third parties. The opinions, facts and any media content in them are presented solely by the authors, and neither The Times of Israel nor its partners assume any responsibility for them. Please contact us in case of abuse. In case of abuse,
Report this post. 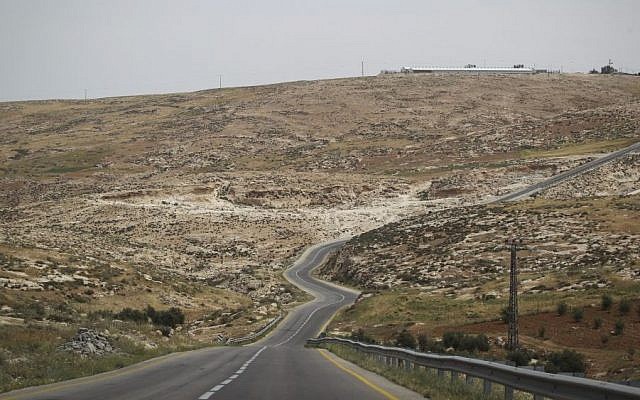 Illustrative: A road passing through the South Hebron Hills in the West Bank. (Hadas Parush/Flash90)

With Sarah’s body lying before him in need of burial, Abraham turns to the inhabitants of the land and expresses his precarious status among them. “I am a stranger and a resident among you” (Genesis 23:4). Though he has been promised that his offspring will inherit the land, at this moment, Abraham does not have a burial plot for his beloved departed wife. As he begins the process of acquiring a piece of real estate for this purpose, Abraham articulates out loud the recognition of his transiency.

One might imagine that this status of “stranger and resident” was a passing phase — an appropriate moniker for the generation of Abraham, Isaac, and Jacob for whom the Promised Land was just that – a promise for the future. After the conquest of the land in the days of Joshua, this expression would seem to no longer be applicable.

And yet, God explains that the Jubilee cycle is in place because “the land belongs to Me, for you are strangers and residents with Me” (Leviticus 25:23). The laws of the sabbatical and Jubilee years encroach upon a sense of full entitlement to the land. We are forbidden from working it every seven years and accumulation of masses of the land in the hands of a few is precluded. The Israelite even after the conquest and settlement of the land must retain a sense of Abraham’s transience.

In Psalm 39:13, David echoes Abraham and Leviticus. He calls out to God: “Hear my prayer, O LORD; give ear to my cry; do not disregard my tears; for I am a stranger with You, and a resident like all my forefathers.” Psalm 119 continues the refrain, “I am a stranger in the land” (Psalm 119:19).

In the last chapter of I Chronicles, as David paves the way for the transfer of the crown to his son, he speaks of Solomon’s charge to build the Temple. In the context of the construction of the holiest building at the holiest site for the Jewish people, David once again reiterates Abraham’s words from this week’s parashah: “For we are strangers before You, residents like our fathers” (I Chronicles 29:15).

It should come as no surprise that Torah warns against an over developed sense of entitlement, even to the land of Israel. Running through almost every religious text of our tradition is the notion that creator’s transcendence calls upon us to develop a healthy sense of modesty. The Talmud tells us that Micah the prophet was able to boil down the 613 precepts of the Torah into a pithy three part statement: “Do justice, love kindness, and walk modestly with your God” (Micah 6:8).

The Ramban (Nachmanides) tells us in his first comment to the book of Genesis that the stories of the expulsion from the Garden of Eden, and the eradication of humanity at the time of the flood, and the dispersion of the population in the wake of the building of the Tower of Babel, all come to warn the Jewish people (and explain to the gentiles) that our connection to the land is contingent.

The Rabbis in Pirkei Avot extend these notions from the area of real estate to possessions in general. There are two opinions about the “what’s mine is mine and what’s yours is yours” attitude to possessions. The first opinion says that such an attitude is average (mediocre?) — certainly no ideal. But the second opinion says that it is characteristic of the wicked Sodom!

Many religious Zionist thinkers were able to articulate a vision that both asserted the Jewish people’s historic and religious connection to the land, while simultaneously cultivating a sense of the transient and contingent nature of that connection.

Rabbi Eliezer Berkovits, a critic of the Israeli left, who defended Israel’s political record, who embraced the results of the Six Day War, who called for a returned Jewish presence in Hebron, also insisted that the Jewish people’s birth took place outside of the land of Israel for a good reason. The Jewish people are not to be a people of realpolitik. The exilic experience was intended to cultivate sensitivity and humility.

He even went so far as to say, “It could be that the hand of history, which has led us back to the land of our forefathers, destined us to find a just solution to the problem of real peace with our neighbors. In the end, who can understand the soul of a nation, or even a portion thereof, that lives under foreign rule better than we Jews who suffered so much from persecution and oppression. Because of the very experiences that we endured throughout human history, we are called upon to implement ideals of righteousness and justice with our Arab neighbors” (Crisis of Judaism, 136-37, my translation).

Rabbi Shimon Gershon Rosenberg, knows by the acronym of his name, Rav Shagar, who came out of classic religious-Zionist institutions in Israel, who taught at and founded institutions in Judea and Samaria, also echoed Abraham of this week’s parashah in his teachings. While he certainly affirmed the land of Israel’s centrality, he also affirmed that in certain senses the Jewish people’s “place is beyond geography and its identity transcends the constricted boundaries of nationhood.” Rav Shagar sought an awareness of the insecurity and vulnerability of exile, in order to ward off hubris and chauvinism that are incompatible with true piety.

Over the generations, fundamental texts and great thinkers (many others could be garnered) have called upon us to revisit the moment immediately before the first parcel of the land of Israel passed into our control. The sense of tenuousness that was inherent at that point in Jewish history was to be recalled at other moments when this sense might come less naturally but still be appropriate.

Perhaps when speaking of the Jewish people’s relationship to the Land of Israel, we should speak of Jews belonging to the land more than the land belonging to us. It seems to me that this type of discourse reflects a major impulse in our tradition that clashes with certain crude and jingoistic platitudes that are becoming more prevalent in the current political climate.

About the Author
Ross Singer lives on Kibbutz Maale Gilboa and works as a tour guide, educator, and translator.
Related Topics
Related Posts