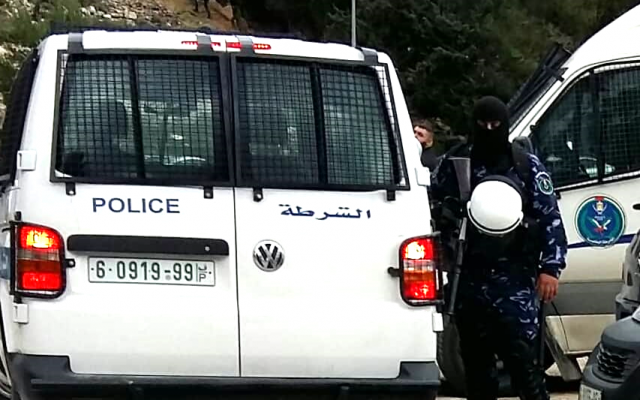 Photo of riot police taken by my anonymous source.

Early this afternoon, a storm started brewing in Ramallah in the Palestinian Authority. But this is not the kind of winter storm one expects. This is the kind of storm in which regular people take to the streets to protest the corrupt regime, the Mahabharata [intelligence services] collects information on dissenters, and police aggressively arrest some of them and take them in for “questioning.”

An anonymous source provided a few photos and brief explanation of what was happening until he felt unsafe and left for home.

This is the start of the demonstration, in front of the Palestinian Energy and Natural Resources Authority.

Photo taken by my anonymous source. This is the Palestine Energy and Natural Resources Authority building.

They are protesting because of the tyranny, you know, the cost of electricity and food and the fact that the cost of living in general is sky-high and the PA is doing nothing for the people.

I did notice one thing, that there are quite a few Mahabharata mingled in with the protestors. They are wearing their government-issued jackets and combat boots and stuff. They thought I was from the Israeli press and they told me: no, no, no; we wont be interviewed by the Israeli press.

The protesters are also worried and they did not want to do any live interviews because they don’t want to be picked up in the middle of the night by the secret police, the “Gestapo” as I like to call them. 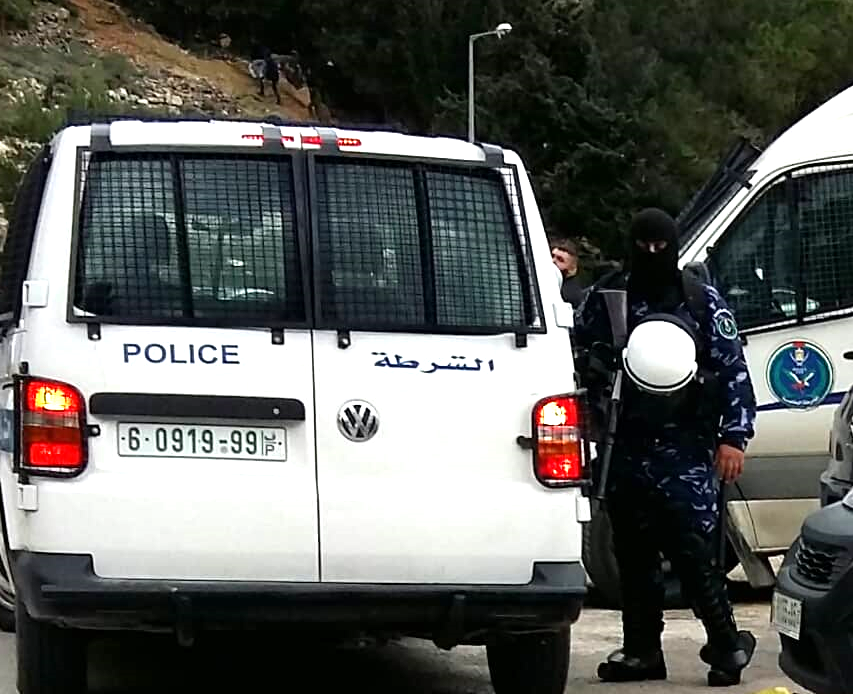 Photo of riot police taken by my anonymous source.

The riot police, with their batons and carrying AK-47s, are hiding their identities with masks because they feel ashamed that they are doing this to their own people. They don’t want their identities to be known. Whenever they violate peoples’ human rights here, they don’t want to be held accountable. They don’t have a badge or badge number — no way of identifying them when they do commit a crime. This one was carrying a grenade launcher that would be used at the protest to fire tear gas. He was looking at me, straight at me, as I took the photo, but he did not know I was taking his picture. I managed to take it on the sly. We are not allowed to take pictures of them.

More and more people are coming in all the time, but he did not feel safe enough to stay to get more photos of the growing crowd.

The demonstrators are from Hebron — they came in on tourist buses — and there are some from Dura and other surrounding villages. I counted at least 5 bus loads and that is not counting the protestors coming in on regular buses. I cannot estimate how many people are here but the street is already filled with demonstrators. More and more people are coming in. I got out of there because the PA “Gestapo” started to ask me questions so I left before it could get ugly.

This is not the first demonstration, and the pressure seems to be building.

Why is this happening? Last month, I wrote about the fact that the PA leadership preferred to reject continued American funding rather than accept it and thus fall under the jurisdiction of American courts under the new Taylor Force Act. Abbas responded immediately to the sudden drop in funds by increasing the duties on new cars, sparking a strike of the car dealerships.

More recently, Abbas told Israel he would not accept any of the funds that Israel submits to the PA if Israel deducts from the sum the amount the PA pays to terrorists and their families. Let me explain: Israel collects certain taxes on behalf of the PA and then sends that sum to their banks. Israel decided to try to prevent the PA from their pay-for-slay programme, as it is called in Israel, whereby terrorists and their families are paid salaries and pensions according to how many Jews they killed; by deducting the stipends the PA provides the terrorists from the tax revenues it passes on to the PA, they hoped they could stop these payments. Abbas said to Israel, in effect: If you are not going to send the entire sum, do not send any of it; we will just not allow the money into our banks. And he ordered the banks not to accept the payments. I guess he thinks that shows that he stands by his principles.

Of course, Abbas and his cronies, living in castles and driving in luxury vehicles, do not have to worry about how to put food on the table for their kids, nor how to warm their homes in the winter. From the start, they have been siphoning off humanitarian funds into their own coffers before allowing for some of it to provide services and build infrastructure for their people. Yasser Arafat was a great role model in this regard.

I imagine that just before the PA comes crashing down on the heads of the hapless brainwashed Palestinian Arab people, Abbas et al will skedaddle out of the PA, taking their families to live out the rest of their lives in safety and with obscene wealth. Joining Arafat’s wife and daughter in Europe, perhaps?

My source ends his report by saying:

People here are fed up with these scumbags, this Tunisian mafia that is oppressing the people and stealing all the aid.

And my question to those who continue to provide “humanitarian aid” to the PA and sponsor all kinds of so-called “pro-Palestinian” events around the globe is this: Do you really hate Jews so much that you prefer to vilify us and blame us for “oppressing” the Palestinians even though, by doing so, you are diverting attention from what is really happening there? By focusing on the Jews as evil incarnate, you are, yourselves, destroying the Palestinian Arab population and absolutely ruining the chances for kids growing up there now to have a normal life. It seems that Jew-hate is so overwhelming that it blinds people to the true humanitarian disaster that the PA is bringing down upon its own people.