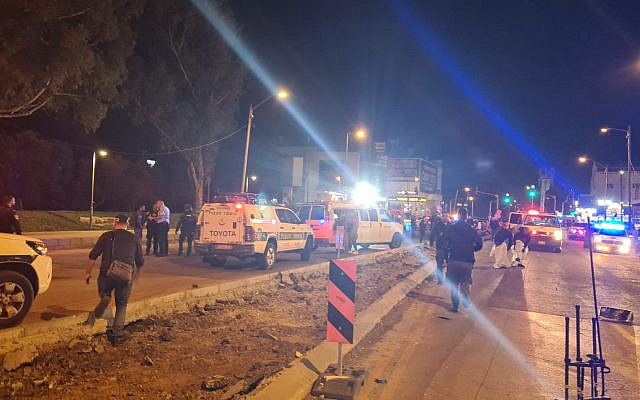 Scene of the Hadera shooting attack on March 27, 2022. Hadera is a coastal city between Tel Aviv and Haifa. (Credit: Israel Police / Wikimedia Commons)

Palestinian President Mahmood Abbas had to be threatened into condemning the terrorist attack in Bnei Brak, and he never condemned the previous two attacks in Beersheba and Hadera. Granted, the first two attacks were carried out by Islamic State-backing Arab Israeli citizens, not by Palestinians (unlike the third attack), but condemning terrorism is always the right thing to do. For someone who claims to want a Palestinian state in the West Bank and Gaza, this makes no sense.

Does Abbas still not understand that unless they put an end to terrorism, there can be no end to the occupation that the Palestinians have lived under for 55 years already?

Israelis certainly should do everything in their power to end the occupation, including limiting/reducing settlements, keeping dialog going with Palestinian representatives, pressuring the Palestinians to engage in peace negotiations, and even having a proposal for a final status agreement. But even if Israel did all these things and more (to be clear, Israel certainly isn’t doing these things right now), it still cannot end the occupation until most Israelis are convinced that the Palestinians will be ruled by a stable and peaceful government that will not engage in violence against Israel.

To understand this, we can look at the map of Israel. Israel’s largest cities (Jerusalem, Tel Aviv, Haifa, Ashdod, Rishon LeZiyyon, Petah Tiqwa, Beersheba, Netanya, etc) are within a short distance from the West Bank. Jerusalem, the largest city, is practically surrounded by the West Bank. Whether Israel could effectively defend itself against such a state is beyond my expertise. Former Israeli Prime Minister and former IDF chief Ehud Barak argues that it can, but even if it can, it is easy to see why most Israelis would be very reluctant to take that risk.

It seems very unlikely that Abbas does not understand this, yet he rarely condemns terrorism, and he continues to fund it despite international condemnations. It seems that like most politicians, Abbas chooses the path of least resistance, i.e., the path that will meet with the least amount of condemnation by his constituents, the Palestinians.

In conversations with Palestinians who support peace with Israel, it appears that the vast majority of them are not interested in taking responsibility for doing anything to end the occupation. They see it as purely Israel’s responsibility. They list all the compromises made by the Palestinian Authority and the security cooperation that it continues to engage in, but they take no ownership for terrorist attacks. They take no ownership for the fact that Hamas is highly popular among Palestinians, especially when it engages in confrontation with Israel. In that sense, Abbas represents Palestinian opinion.

I wrote previously that Israelis seem to have become comfortable with the occupation, but it seems that Palestinians are no less comfortable with terrorism, even when they don’t directly support it. Israel being the stronger party, it is expected to do more towards peace, but it is both naïve and unreasonable to expect the Palestinians to do nothing, to not take responsibility for ending violence.

Palestinians must ask themselves: do they want self-determination? Do they want a state? If they do, then they must act accordingly. They must be the first to condemn Palestinian terrorism when it occurs. They must hunt terrorists, neutralize them, and cut their sources of funds, not because someone else demands it but because it is in their best interest to do so, not to mention that it is the morally correct thing to do.

Until the Palestinians do this, until they take their own goal of self-determination seriously, they can’t expect anyone else to take it seriously either.