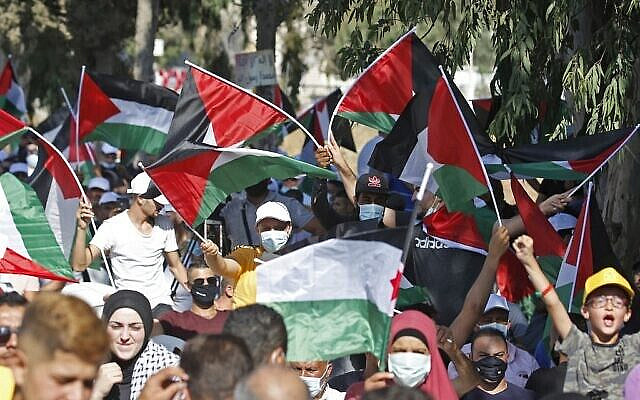 Palestinians protest against the United Arab Emirates' decision to normalise ties with Israel, in the village of Turmus Aya near Ramallah on August 19, 2020. (Photo by JAAFAR ASHTIYEH / AFP) - From the Times of Israel website.

Not surprisingly, the Palestinian leadership went crazy after the surprising diplomatic agreement between the United Arab Emirates and Israel was announced.

As reported in this newspaper, the Palestinian Authority issued a statement characterizing it as a “betrayal of Jerusalem, Al-Aqsa mosque and the Palestinian cause.” Palestinian President Mahmoud Abbas demanded an “immediate retraction”, Foreign Minister Riad al-Maliki announced the recalling of the Palestinian ambassador to the UAE, and Prime Minister Mohammad Shtayyeh informed that Palestine will boycott Expo Dubai 2021. Spokesman Nabil Abu Rudeineh assured in a text read on television that “the Palestinian leadership rejects the actions of the Emirati government and regards it treason.” High ranking official Saeb Erakat said “I never expected this poison dagger to come from an Arab country.” PLO Executive Committee member Hanan Ashrawi stated: “Israel got rewarded for not declaring openly what it has been doing to Palestine illegally & persistently since the beginning of the occupation.” Fatah Secretary General Jibril Rajoub hinted that ties between Israel and the Gulf countries were known, “now the swamp has dried up and everyone is naked.” The Grand Mufti of the Palestinian Authority Mahmoud Al-Habbash escalated the rhetoric by calling it an act of “political prostitution” and issued a fatwa that prohibits

Muslims from the United Arab Emirates from praying in the Al-Aqsa Mosque. Palestinians on the esplanade of the mosques in Jerusalem stepped on and set fire to a poster with the face of Emirati leader Mohammed bin Zayed Al-Nahyan, while official Palestinian television called the UAE “a tumor in the Arab body.” Even Yasser Arafat´s widow, Suha, was viciously criticized for favoring the deal. In Gaza, of course, Hamas and Islamic Jihad echoed these protestations.

Ramallah, once again, is not correctly sensing the movement of history. In recent years there has been a real, albeit mostly covert, rapprochement between the Arab nations and the state of Israel in light of a shared concern about Iran’s political, military and sectarian expansionism in the region; an objective assessment of the potential exchange in the areas of commerce, technology, medicine and security; a weakening of yesteryear´s pan-Arab beliefs; and a fatigue with the intractability of the Palestinian conflict. If in the past the Palestinian cause was used as an excuse for political rejection of Israel, today it is mostly seen as an obstacle to reconciliation. As Haviv Rettig Gur has rightly observed in The Times of Israel, “the Arab world has changed, the Palestinian narrative has not … [the Palestinians] were not ‘betrayed’ … but simply left behind.”

The distant, pioneering peace treaties with Egypt and Jordan have received impressive impetus with the UAE-Israel deal. Other Arab countries are expected to follow the UAE´s steps; if not immediately, then eventually. Will a stateless Palestinian Authority be able to obstruct or stop this movement? Will it be convenient for it to be relegated to the margins of the regional system as a complaining political pariah alongside Hamas, Hezbollah, Iran, Turkey and Qatar, the other opponents of the diplomatic agreement? What political benefits will it accrue by clinging to eternal protestation? Is it betting on the chance that a Biden Administration will come to its rescue? Alternatively, wouldn’t it make more sense for Ramallah to take advantage of the Arab-Israel rapprochement to augment its chances in a future negotiation? Wouldn’t it be wiser to capitalize on the suspension of annexation to go back to the negotiating table? The White House has made it clear that the parameters of its peace proposal were not “set in stone.” President Donald Trump and Secretary of State Mike Pompeo have both urged the Palestinians to return to the peace talks. Ditto for Israeli Prime Minister Binyamin Netanyahu: “This historic change will also advance peace with the Arab world and, in the end, peace, true peace, monitored, secure, with the Palestinians as well.”

As the saying goes, the Palestinian leadership is known for never missing an opportunity to miss an opportunity. Although its early reactions to the UAE-Israel accord were exaggerated and wrong, it is not too late to change course. Hopefully, at some point it will shake off its legendary political intransigence´s damaging spell.

About the Author
Julian Schvindlerman is an Argentine writer and journalist specializing in Middle East affairs. He lectures on World Politics at the University of Palermo and is a regular contributor to Infobae and Perfil. He is the author of The Hidden Letter: A History of an Arab-Jewish Family, Triangle of Infamy: Richard Wagner, the Nazis and Israel; Rome and Jerusalem: Vatican policy toward the Jewish state; and Land for Peace, Land for War.
Related Topics
Related Posts
Comments