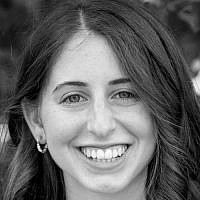 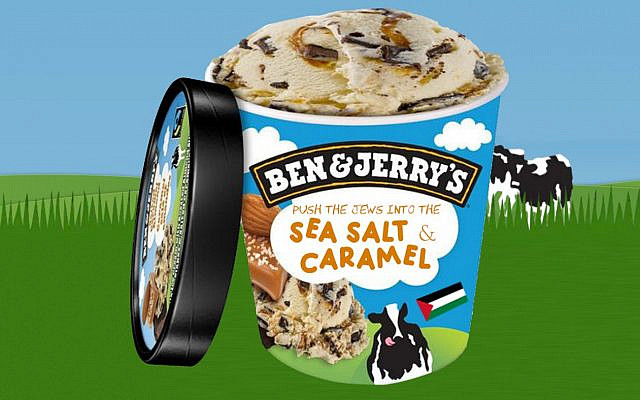 A picture of a Ben and Jerry's pint of ice cream with the text 'Push the Jews into the Sea Salt and Caramel.' (Twitter)

Last week, I binge watched the new Netflix series “My Unorthodox Life.” For those who have not yet indulged in the Jewish version of the “Kardashians,” the show follows the transformation of the Hendler, turned Haart family, from being Orthodox, living a traditional religious life in Monsey, to becoming a semi-secular family living in a New York City penthouse. The matriarch of the family, Julia Haart, decides to leave the insular community, and she eventually becomes the CEO of an international modeling and fashion company, shocking her family. I did research on Jewish opinions of the show; I was both fascinated and shocked by the lack of support for Haart in some online Jewish space. Personally, I struggled with Haart’s lack of distinction between her oppressive, misogynistic experience in the community, and the reality of many religious Jews which is less limiting. While someone like me knows the wide spectrum of religious expression and freedom present in the Orthodox community, those not educated in Judaism could consequently misunderstand our religion from simply watching the show.

Similarly, Ben and Jerry’s decision to “End Sales of [their] Ice Cream in the Occupied Palestinian Territory” left me feeling uneasy. Both Ben and Jerry are Jewish, have spent time in Israel, and have the wherewithal to make informed decisions about their company. But, the ambiguity of this statement has only led to more harm and hate against the Jewish people as a whole (Ben and Jerry’s explicitly said they will continue to sell their products in Israel proper in their recent New York Times Opinion Essay). While this choice outwardly supports the Boycott, Divest and Sanction (BDS) movement, Ben and Jerry still support and stand with Israel — meaning they do not support the ultimate goal of BDS to dismantle Israel in its current state. I believe that political statements like these show that the occupation is wrong, and that Israel will face consequences if they do not change their policies. However, this decision better the lives of the Palestinians in any way: instead, Palestinians will be put out of work, and deprived of sales (and yummy ice cream).

So, how does reality TV and ice cream relate to this week’s Torah portion? Parashat Eikev focuses on the final moments before the Jewish people enter Israel. Moses speaks to them about the responsibility of being in the ‘promised land.’ Moreover, the portion discusses the covenant the Jews join with God while in the land: “God will love you and bless you and multiply you…You shall be blessed uniquely from the other nations, And Adonai will remove from you all illness, and …instead will lay them upon all your enemies.” There is a condition of this “brit” or covenant, however, which Moses explains. He instructs the Jewish people to fear God, believe in only one God, and teach all of God’s commandments to their children.

Yet God is not asking for anything new; God is simply reinstating the ideals put forth to the Jewish people before. I am challenged by why the Torah poses their entry into Israel as fragile: why should their behavior change if they were already supposed to be behaving well? (both as Jews, following God’s commandments, and as moral people). Both Haart and Ben and Jerry’s challenged the status quo to create more good – they embody the ideals put forth by God.

This parasha discusses that the people must “Circumcise your hearts and be no longer hardened of heart.” This component of the parasha, which repeats in other parts of Deuteronomy, explains that we, created in God’s image, also have the power to do good and create change alongside God. The word change is powerful, but can be superficial. For example, if Julia Haart is still forcing specific – though different – ideologies onto her children, I worry she did not change when she left the community in terms of her ability to see all perspectives. Similarly, Ben and Jerry did not foresee their decision negatively impacting the people they claim they want to help; and thus their divestment is troublesome.

This past year, I traveled to Israel and lived there for nine months – although I was not greeted by Moses at Ben Gurion Airport; I only had the director of my program, Young Judaea Year Course in Israel, at the gate. As I anxiously exited the plane and began the biggest adventure of my life, I thought deeply about the ways I wanted to improve myself. In America I did not light shabbat candles, nor did I give enough tzedakah from my babysitting money. And despite wanting to act more holy, more moral in the promised land, I found that it was all too easy to continue my old habits. Simply being in a holy place doesn’t make you holy – I learned that I have to be deliberate in striving to be a better version of myself, one that is more closely aligned with my Jewish values.

Ten months later, I’ve returned to America, and I am definitely a changed person, and a changed Jew. Now I also understand that those 10 months were just the beginning, and the work of improving myself and the world around me must be ongoing. As I was studying this week’s parasha, I had to again ask myself: what does it really mean to “do good?” And am I living a life that is, according to the Torah, “good?”

In mid May, I was eating a mediocre hamburger near the beach with my three closest friends when we were forced into the back of a restaurant due to rocket attacks. The rockets continued for an hour, and we finally found a cab to bring us back to our dorm. I had never seen the streets so empty, but I noticed young Arab men clashing with police officers in HaBima Square. Around 3 am, the rockets began falling less than a mile from our dorm and I again feared for my life in the crowded – this time proper – bomb shelter of my building.

While my program responsibly sent us to a small town in the middle of the Negev, I could not shake the feeling that everything happening in the “Operation Guardian of the Walls” was wrong. I should never have spent an evening in the back of a crowded bathroom with strangers speaking about how war is normal there. My immediate reaction at the time was to defend Israel’s actions to anyone who challenged my experiences. I chose to ignore the blatant divisions between most Israeli Arabs and Israeli Jews and Jews and Palestinians in my past trips to Israel because I had only been exposed to the extreme “Pro Israel” opinion. Increasingly, though, I felt caught in the middle of two communities when discussing Israel/Palestine – those who advocate for the need for the Jewish state and those who question Israel’s military and political choices. It’s important to me to learn from those both on the left and the right who push for change in different forms to better the people of Israel.

For someone like me who lives in America without fear of being harmed, whether physically, spiritually or politically, I used that privilege to open up my heart to those who think and live differently than me. I tried to educate myself on the current war in order to understand the damage happening in Gaza and the related violence and instability in the West Bank, while also validating my own terrifying experiences. I knew there was an 18 year old girl somewhere in Gaza who, like me, was horrified by the violence and worried about being killed. I felt disturbed that Israel felt the need to launch a massive operation which definitely destroyed many Hamas weapons and fighters, but also ruined infrastructure, schools and the livelihood of Palestinians. I let my heart be opened – and thought about how the war affected all people in Israel and the Occupied Palestinian Territories.

I do not solely follow God’s commandments because they are written in the Torah. Rather I feel it is right to approach other people with openness and respect. I believe behaving morally in modern life translates into a commitment to pursuing justice because of B’tzelem Elohim, the idea that all are people created equally in God’s image. I believe it means maintaining a strong community, inviting those who are lost or neglected, like refugees in Israel coming from Sudan, Ethiopia, Russia and other places that are oppressive for Jews, into mainstream Jewish spaces in Israel, instead of segregating them into lower class communities and alienating them from their own religion.

I want to leave this D’Var with something positive, a feeling of hope, and I know Jews, like any other group of humans, all with our own shortcomings, grapple with what is right and wrong. Julia Haart took a stance against sexism and extremism in God’s name when she left her community and created a TV series to encourage others to fight their oppression. But in the process, she also hurt Jews who do not challenge their way of life and consequently get attacked from the outside world for not being ‘modern enough.’ Ben and Jerry bravely made a business decision that split the Jewish community, and disappointed those on the far left who believe any form of business in Israel is detrimental to human rights. And I believe that I at least am seeing a more clear vision of the Occupied Palestinian Territories, one that suggests Israel is now doing more harm than good.

While I cannot not solely resolve the conflict in the Middle East, I can play an active role towards establishing peace by educating other young people on the complex reality of Israel/Palestine. I’m excited to engage in dialogues regarding the future of the Middle East, and to continue to learn and teach more about the Israelis and Palestinians who are experiencing the impact of this almost seventy five year old conflict. Hopefully soon, those living the reality we speak about can also begin to think differently about what it truly means for us to do “good” and behave well in the eyes of God and our traditions. If we each do our part, if we each put just a little more goodness and open-heartedness into the world, we can work towards a better life for everyone living in the Middle East, and throughout the entire world.