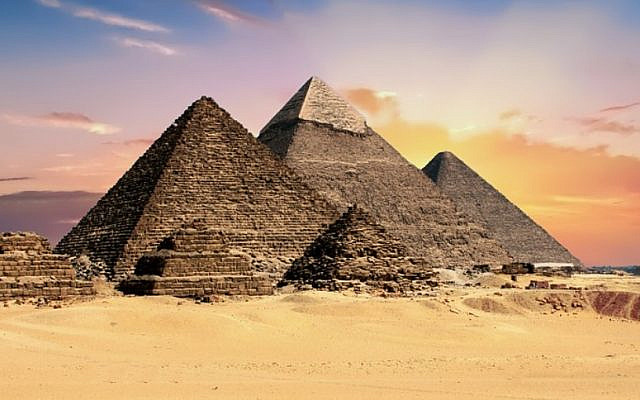 Pyramids of Giza (while built in an older period, also built by slaves) Source: https://pixabay.com/photos/pyramids-egypt-giza-archeology-2159286/

The Shabbat before Pesach has been traditionally known as Shabbat HaGadol, “the Great Shabbat.”   While many rabbis give a sermon each shabbat, that is a relatively new custom in the past two hundred years.  Sermons were reserved for special occasions and were often long philosophical or halakhic discourses. (The other shabbat reserved for an extended discourse was Shabbat Shuva, the Sabbath of Repentance before Yom Kippur.)  As Shabbat Hagadol was the Shabbat before Passover, it became customary for Rabbis to speak about the extensive laws of Passover, although contemporary rabbis often expand this to include religious and moral teachings.

It seems clear that the Shabbat is named after the haftarah, read from the third Chapter of Malachi.  Malachi, the last of prophets, envisioned the future and final redemption heralded by none other than Elijah the prophet. This will be a day in which those who reject God and embrace injustice – ‘who practice sorcery, who commit adultery, who swear falsely, who cheat laborers of their hire, and who subvert [the cause of] the widow, orphan, and stranger’ (Malakhi 3:5) – will be punished.  After a millennium of an apparent eclipse of God, God and God’s justice will be visible to all to see.  This is called in the haftarah the Yom HaGadol ve’Hanora, the great and awe-inspiring day.  Just like God seemed silent for hundreds of years during the Egyptian servitude, only to exercise justice upon the Egyptian oppressors, God would exercise in the future redemption justice.  As Passover is the holiday of redemption, the past redemption of Exodus is linked to the future and ultimate redemption.

However, despite the clear literary connections between the haftarah and the name shabbat hagadol, Rabbinic writers have focused on other aspects which make this shabbat unique.  While the haftarah speaks of the greatness of God’s power at the end of days, many rabbinic texts tend to focus on the greatness of the commitments the Jewish people made at the moment immediately preceding the Exodus.

According to rabbinic tradition the Shabbat immediately preceding the offering of the Paschal lamb and the death of the Egyptian first born was the tenth of Nissan.  The Torah tells us that on that Shabbat in Egypt, the Jewish people did something which was incredible. God had commanded them on the tenth to take a lamb and to tie them outside the doors of their houses. This lamb, the Paschal lamb, would be sacrificed by every family four days later.  The rabbis expound on this event.  The Egyptians questioned them about this, and they told them that God had commanded them to sacrifice this lamb, that they would slaughter it on the 14th day, and that a tenth plague would come to Egypt. Now, according to this rabbinic reading, in Egypt the lamb was worshipped as one of their Gods, so the actions they took were decidedly political.  To slaughter an animal was not simply about a sacrifice, but it signified a rebellion against Egypt and their values.  This act by its very definition was subversive, and therefore dangerous.  According to the rabbis, the fact that the Egyptians did not respond with violence was a miracle.  For this reason, the shabbat is called the “great shabbat.”[1]

However, this is not only a statement about God’s protection, which will be fully realized four nights later at the moment of the death of the firstborn, but it is also a statement about the agency of the Jewish people in their own redemption.  In this action, the Jewish people were not passive onlookers being protected by God but were actively participating in the redemptive process by freeing themselves of the dehumanizing and idolatrous culture in which they lived.  Before God had completely extracted them from servitude four days later, they had begun to extract themselves. In taking the lamb on the tenth day according to God’s will, they in fact were taking their first covenantal act, following the dictates of God.[2]  In the words of one midrashic tradition, they “freed their hand from idolatry and embraced mitzvot.’[3]

This theme of dedication to God and liberating oneself from the spiritual and psychological servitude of slavery is reinforced four days later, when they sacrifice the korban pesach, the Paschal lamb.  They also ensure all men partaking of the sacrifice are cicumcised.  The Rabbis make an interesting statement.  The Jewish people at that point were on the lowest level of impurity, and had no merit to be redeemed, so God gave them the two mitzvot of milah (circumcision) and pesach (the Paschal offering).[4]  The former is an entry ceremony as an individual, the latter as a community.  Interestingly these are the only two positive mitzvot that are punishable with the Biblical punishment of karet, spiritual excision from the Jewish people.  It is clear why.  Both are entry ceremonies into a covenantal people.

However, we need to ask the obvious question.  Why did they need merit to be redeemed?! They were being abused and oppressed.  While this may have been enough to punish the Egyptians for their dehumanization of another people, it was not enough to make the oppressed God’s people.  To do that, they needed to act themselves; they took agency for their own liberation, and it started on a spiritual and psychological level.

However, we have one more question to answer. What is the connection between the tenth day and shabbat?  If this was just a coincidence, we should just commemorate the event on the tenth whether it is or is not Shabbat.  The answer has to do with the secret of shabbat itself.  Just as the rabbis state that one engaged in idolatry is as if they have denied the entire Torah, one who observes shabbat is as if they have fulfilled the entire Torah.  More than any other mitzvah in the Torah, the Shabbat represents the foundation of God’s mastery over the world; to observe Sabbath every week is to announce to all that everything belongs to God.  In taking the lamb on Shabbat, they attest to all that the world belongs to God, and not to Pharaoh or any other master.

In conclusion, it is interesting that Shabbat marks the creation of the world, but after the Exodus it is also a reminder of the Exodus as well.  On the Friday night kiddush both reasons are mentioned, side by side, as if they are equal.[5]  Allow me to provide an explanation:  Shabbat as a remembrance of God’s mastery of the universe and stewardship of all life; we rest as God rests on the seventh day.  However, in Exodus, this cosmic ideal is brought down into world of human history, of empires, of power politics.  No person can dominate another, dehumanizing them into slaves without respite, for they are do not belong to them.  The exodus is a story of liberation to the higher consciousness that all are creatures of the same Creator.  The sign of shabbat that points to this is the dimension of rest, where even servants and animals rest.  The cosmic idea of God’s mastery is not simply a nice religious idea, but a political idea as well.  As such, the liberation is not simply about God’s miraculous intervention, but human beings partnering with God to liberate themselves.

Before this Shabbat, when the people kept the ancient tradition to keep the Shabbat it was because of creation, something outside and beyond themselves.  Following this shabbat in Egypt, they kept it also – and perhaps primarily- to remember the Exodus. The process of liberation, of Exodus, is a process ongoing as is it about society and people.  In slaughtering the gods of Egypt on that first shabbat, they announced to Egypt- and the world- that they would no longer submit and accept this dehumanizing and corrupt human order, but they would be part of a struggle to reestablish the order of the world as decreed at the moment of creation.  Once this happened, miracles occurred.

If our haftarah focuses on God’s miraculous and terrifying intervention in the future redemption, perhaps the rabbis wanted to include human agency as part of the redemptive process.  Shabbat Hagadol therefore refers to the ongoing partnership between human beings and God to bring about redemption.

[4] Ibid.  See also Ezekiel 16:8 quoted in the maggid section of the Haggadah and various classic commentaries there.

[5] See the insights of Eliyahu Ki Tov on Shabbat Hagadol in The Book of our Heritage. (If one looks at the mention of shabbat in the Decalogue in the book of Exodus and later in Deuteronomy, they will see Moses ‘adds’ Exodus as a reason.)