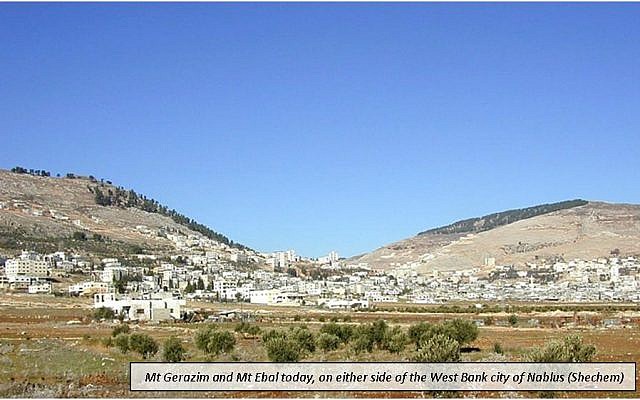 Translation of the opening of this Portion of the week: See, [without pondering too much, that] I give [over] before you in the present [and so, every moment from now on, the concept of] blessing and curse (in this world, after the supernatural existence in the desert). The blessing will be [through] that you listen to the Commandments of your G^d that I command you presently [and that forever]. And the curse will materialize if you don’t … (Deuteronomy 11:26-28). As is written in the Mishna (Sayings of the Fathers 4:2): the reward for [performing] a Commandment is [performing that] Commandment, creating yourselves a good life. These words by Moses come to teach us: you want a Blessed Life, then listen to the Torah’s guidelines. Blessing doesn’t come from Above (compare Lamentations 3:38-39) but from if you behave properly.

After this clarification of blessing and of curse, the Torah starts to tell us of the blessing on Mount Gerizim and the curse on Mount Ebal. Well, Moses lost me there. What, for Heaven’s sake, are these mountains about? But just before Shabbat, I found this wonderful blog post The real message of Mount Gerizim and Mount Ebal, which sheds a whole lot of light on them. Especially on how they compare to Mount Sinai. (I’m not going to summarize that rich post – please go read it yourself in total.) It is connecting our two mountains to the same ones mentioned 16 Chapters later (Deuteronomy 27:1-26) and what happens there. I will now add a tiny bit to that.

For me, what happened at the Mounts Sinai, Grizim and Ebal stands for instructions for a good life. I’ll accept that at both times this had the form of a Covenant, but the second time, it was not a new covenant but rather a further development of how it works to have a Good Blessed Life.

At Sinai, we just came out of slavery. To learn a completely new way, we needed to be sheltered and our miraculous existence in the desert was just that. The lesson was and had to be simple: do this and don’t do that, and we answered: we will (and later we’ll understand it – Exodus 24:7).

Even the directive was very simple when the Sages tell us (Talmud Shabbat 88a) that G^d turned the mountain upside-down over our heads and said: If you accept the Torah, it will be well for you and if not, your graves will be there. “There” meaning: there in Egypt. I wouldn’t have let you go if I knew that you would not go accept this now. (I heard this clarification from the Mizrachic Chief Rabbi of Gilo, Moshe Ben-Abu.) So don’t object now – this is your predetermined choice.

At Sinai, there was one mountain, at entering the Land there were two.

At Sinai, there was just Dos and Don’ts and later pondering (Exodus 24:7). Even seeing and hearing fused as they all saw the thunder (Exodus 20:15). G^d even said at the same time “keep” and “remember” (Prayerbook, Friday night).

(There is a similar complication of the message from our Patriarchs before our Exile to Egypt, suddenly Jacob having two wives, two names and two places he felt good (the Land and Egypt) – “because then he was with Joseph” and balance between sternness and kindness in one person.)

Don’t get confused. Free Will still means: use it, choose life (and good and blessing) not: you now can go either way. We are still commanded to obey. But we got a higher alternative now. When you do what’s right, you’re not commanded anymore. Be you (your higher self) and you can obey without obeying. As Sayings of the Fathers 6:2 (based on Exodus 32:16) says: keeping the Torah and becoming free is the same thing. It’s harder than just following orders, but it is so much sweeter.

And that is Moses farewell message: Do as you really please. Do what makes you really happy. (Rosh Yeshiva Simcha (!) Wasserman advised me this.) Leave steadiness behind and develop into who you really are. The bad, curses or deaths will gradually disappear. Lechayim!