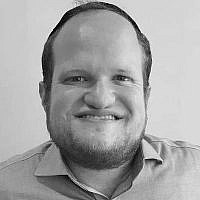 The Blogs
Boruch Rizel
Apply for a Blog
Advertisement
Please note that the posts on The Blogs are contributed by third parties. The opinions, facts and any media content in them are presented solely by the authors, and neither The Times of Israel nor its partners assume any responsibility for them. Please contact us in case of abuse. In case of abuse,
Report this post.

In this week’s Parsha we read that Aharon Hakohein was commanded to light the Menorah in the Mishkan.

Lighting the Menorah was a ritual that Aharon and his descendants were required to do. Both throughout the time we had a Mishkan and later during the times we had the Batei Mikdash.

Rav Yissochar Frand Shlita brings the Ramban that says that the Menorah was later lit by Klal Yisroel because of the Chanuka Miracle even after the Beis Hamikdash was destroyed. This all because of the heroism of the descendants of Aharon who were the Chasmonaim known famously for the Chanuka story.

Aharon Hakohein and his descendants were known for their dedication on behalf of Klal Yisroel and Hashem wanted to honor Aharon and his family by making sure that they would light the Beautiful Chanuka Menorah and later on the whole Klal Yisroel would follow suit on Chanuka every single year.

By speaking about this Beautiful Mitzva may it light up our Shabbos and give us a beautiful summer!

About the Author
Boruch Rizel is a Project Manager and a Blogger. He graduated from Excelsior College and has a TESOL certificate from the International Open Academy.
Related Topics
Related Posts
Comments