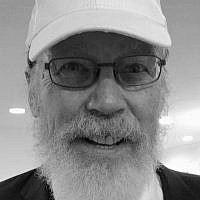 The Blogs
George Murray
Life is Beautiful All The Time
Apply for a Blog
Please note that the posts on The Blogs are contributed by third parties. The opinions, facts and any media content in them are presented solely by the authors, and neither The Times of Israel nor its partners assume any responsibility for them. Please contact us in case of abuse. In case of abuse,
Report this post.
This week’s Torah portion, Parshas Bo, culminates in the Exodus; G-d’s Deliverance of the Children of Israel from cruel Egyptian bondage and slavery.
The Exodus appears to be the penultimate event for Jews. We have the Passover Holiday where we are commanded to discuss the Exodus in all of its permutations and we mention it many, many times in our Daily Prayers.
Yet, the Exodus was only the final Victory celebrated of G-d vanquishing Pharaoh and freeing the Children of Israel from Cruel Bondage.
The penultimate event was receiving the Torah on Mt. Sinai. The Miraculous Victory of the Exodus was the means to achieve that end. It is only the spiritual relationship with G-d that gives permanent meaning to any victory in This World.
It could be said that the United States Constitution gives permanent meaning to the military victory that freed the Colonists from Great Britain. It is the spiritual connection the Victory stated in the Declaration of Independence and the American People — “We hold these truths to be self-evident: that all men are created equal; that they are endowed by their Creator with certain unalienable rights; that among these are life, liberty, and the pursuit of happiness.”
“Our Constitution was made only for a moral and religious people. It is wholly inadequate to the government of any other.” – John Adams
These self-evident Truths that come from G-d, include Freedom of Speech and Freedom of Religion. The existence of the United States as a free Republic can only continue based on this spiritual bridge to the US Constitution. And the Constitution is the bridge between the secular necessities of government and its moral and spiritual relationship to G-d.
Today, America experiences unrelenting attacks on the moral and spiritual values that undergird the US Constitution.
And, it is the only secular institution guaranteed the freedom to do so in the US Constitution — the Free Press — that is committed to destroying our Freedom of Speech and Freedom of Religion. The established print and broadcast media institutions, and now the Internet Social Media platforms, have committed themselves to censorship and the destruction of public affirmations of G-d. A whole cadre of politicians and other “celebrities” have joined in perpetuating this Evil on American citizens and the Free World.
The United States of America, a beacon of religious freedom and freedom of the individual to speak his mind, is embroiled in a conflict for its Constitutional soul. It is on the cusp of becoming irrelevant as the current political thought seeks to tear down the ties that bind the American People to G-d. This struggle is as important as was the physical struggle to become a Free and independent Nation, for without meaning — spiritual, G-d given meaning, American Independence and all of the subsequent victories that the United States has given the world mean nothing.
Those who divorce themselves from G-d and spiritual values can, in the end, only embrace Evil — as has the present Big Tech Media State Democrat State; just another Pharaoh or Wicked Government that seeks to eradicate all Values and moral Purpose in This World.
The American People must seek to regain their Sinai; to regain their American Constitution and its connection to G-d.
Good Shabbos!
About the Author
George Moshe Murray is a Torah observant Jew; 13th generation American; and a student of history and religion.
Related Topics
Related Posts
Comments