The Blogs
Pesach Lattin
Not Your Average Orthodox Jew
Apply for a Blog
Advertisement
Please note that the posts on The Blogs are contributed by third parties. The opinions, facts and any media content in them are presented solely by the authors, and neither The Times of Israel nor its partners assume any responsibility for them. Please contact us in case of abuse. In case of abuse,
Report this post. 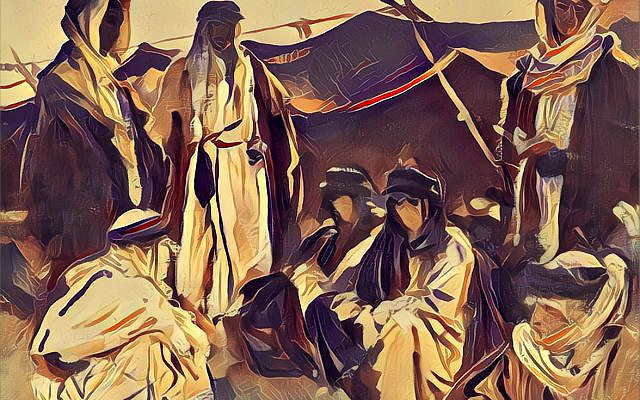 Avraham and his Tent, Original Artwork by Pesach Lattin

When God visited Avraham Aveinu, three travelers appeared, asking for a place to stay. Rashi tells us that its possible to understand what Avraham said, “please pass not by your servant,” as having been addressed either to angels or to Hashem.

What if he addressed angels? “Adonai” would just mean “my lord,” and carries no kedushah, no holiness. However, was he addressing HaKodesh Baruch Hu? Then Avraham was asking Hashem not to leave while he cared for guests. In that case, “Adonai” is the name of God.

If we are to read this according to Shabbos 127a, in the Talmud, we can see a principle of Judaism that maybe many do not understand. “Receiving Guests is Greater than Receiving the Divine Presence of God.” This is thus why Avraham asked Hashem to “wait,” while he took care of his guests.

In Judaism, hachnasas orchim, or hospitality to guests is a very important mitzvah. Yet, the idea that hospitality should take precedence over Hashem should be better explained.

Avraham Aveinu’s level of kidness, his middah of chessed, was extremely strong, and could be understood on many levels. First we see that hachanasas orchim, represents the full manifestation of the attribute of gemilas chassadim (loving-kindness) which is one of the pillars that the world could not stand without. (Avos 1:2) “The Torah is replete with kindness,” the Talmud tell sus in Sotah 14a. “The Torah begins with an act of kidness, and ends with an act of kindness.” Additionally, every mitzvah ben adam lechaveiro, commandments between each of us, those which govern the way we act to each other, are a formal expression of loving-kindness.

Loving-kindness is also called a derech Hashem, one of the pathways to understanding the Ribbono Shel Olam, the Master of the Universe. Avraham performed a double service by dedicating his life to chessed. On a simple level, he represented the Godliness in the world by emulating Hashem, as much as can be possible. This included every activity for the welfare of others. He was a living example of tzelem Elokim, the divine image.

He taught the world to see the Kindess of God in everything, in every aspect of creation. Through the undivided attention he gave to his guests, he raised the acts of service to God to a new level. This is a third and deeper understanding of the quality of loving-kindness, for it also raises the awareness of others of the kindness of Hashem, who brought the world into existence. Hashem’s kindness is on the world at every moment and what holds it together.

This quality of Chessed is fundamental to the role of Klal Yisroel. We are collectively called “Merciful, Humble, Performers of Kindness (Yevamos 79a). Anyone who has these middos show her attachment to the Jewish people.

Anyone can show such a Kiddush Hashem, a sanctification of God’s name, through a sincere act of kindness. This power is not limited to only Avraham, as every single person has this potential. A selfless act of chessed impresses on a person that the benefactor lives with a higher set of rules and sees kindness as an expression of faith. Without this faith, people would be too selfish to genuinely give of themselves.

Heard and Adapted from Lectures of Rabbi Yisroel Belsky, ZTL

About the Author
Pesach “Pace” Lattin is a leading online media expert with over two decades online in creating everything from display networks, affiliate systems, fraud detection companies and online publications. He is also the former founding member of the Secret Service's New York Electronic Crimes Task Force -- and his forensics manual is still the foundation of every Secret Service computer investigation.
Related Topics
Related Posts