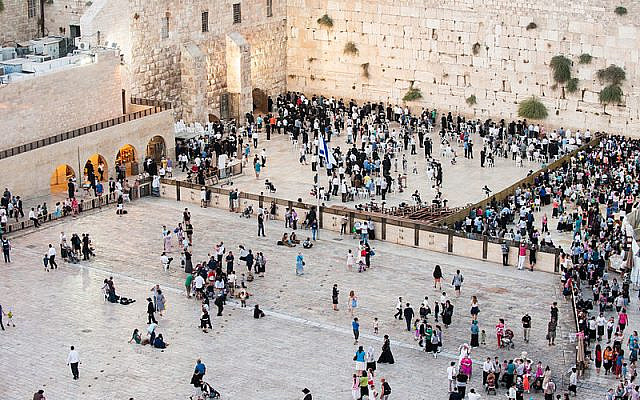 Jews at the Kotel (Wikimedia Commons)

We usually find ourselves, as individuals, to be a part of a larger context, whether that’s with tens of thousands of spectators in a stadium or thousands of students on a college campus. In this reality, people can sometimes find themselves feeling like the Waldo of “Where’s Waldo?” yearning to reclaim their sense of self. This is a dilemma that many people — from young teenagers to full-grown parents — are grappling with, feeling as though their identities have been snatched and sent into oblivion. As Jews, this is a complex we can sometimes face, trying to find the balance in our Judaism between secure individuality and vibrant nationality.

In Parshat Bamidbar, following Bnei Yisrael’s freedom from slavery in Egypt, Hashem instructs Moshe: “Take a census of the whole Israelite community by the tribes of its ancestral houses, listing the names, every male, head by head” (Bamidbar 1:2) The parsha continues onward with the specific details of how Moshe and Aaron should conduct their counting, listing the final numbers of each tribe of Bnei Yisrael.

Commenting on this pasuk in Shenei Luhot HaBerit, the Shelah HaKaddosh explains that the census’ purpose was to allow the Shechinah (Divine Presence) to rest upon Bnei Yisrael. Moreover, the Shelah emphasizes that the census encouraged every person to be aware of their unique, individual value, encouraged to feel the meaning and purpose imbued in their life.

Here, the Shelah seems to be alluding to the difficulty previously mentioned; according to the Shelah’s commentary, the census sought to strengthen Bnei Yisrael’s nationhood by having the Shechinah rest upon them, and it tried to empower each individual to feel the magnitude of their personal power.

This powerful piece from Rav Kook works nicely with the pasuk from Bamidbar and the Shelah’s commentary. At that point, Bnei Yisrael was being forged into a perfected, collective nation. From Rav Kook’s note, it seems that to further Bnei Yisrael’s nationhood and allow the Shechinah to rest upon them, each individual needed to first undergo their unique, individual revolutions.

In Masechet Sanhedrin, we learn that “each and every person is obligated to say: The world was created for me” (37a). At first glance, such a notion could be misconstrued as egotistical and antithetical to the basic principles of Judaism. However, this gemarah actually reinforces the idea previously mentioned: Every individual person has unquantifiable meaning and purpose, and it is up to each one of us to recognize that.

It is clear that Hashem wants us empowered as individuals and unified as a nation, but how do the two complement each other? Ultimately, every person has a unique role to play in the Jewish story, and these missions are not diminished by our nationhood, rather they are contextualized with greater meaning. When we reclaim our true sense of self, we will experience greater connectivity to Hashem and Am Yisrael; that is the ultimate synthesis of the individual and the nation.

[1] As translated by Rabbi Ari Ze’ev Schwartz in “The Spiritual Revolution of Rav Kook,” p. 13