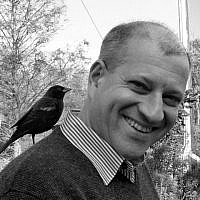 The Blogs
Dana Kaplan
Apply for a Blog
Please note that the posts on The Blogs are contributed by third parties. The opinions, facts and any media content in them are presented solely by the authors, and neither The Times of Israel nor its partners assume any responsibility for them. Please contact us in case of abuse. In case of abuse,
Report this post.

In this week’s parsha, God again asks Moses to go visit his step-father, Pharaoh. At the very beginning of the portion, God tells Moses directly that God’s intent is to make Pharaoh’s heart stubborn so that the divine signs might be visible in Pharaoh’s midst and therefore display divine power. And the reason for this? So that we can relate into the ears of our children, and the children of our children, the story of what happened in Egypt. And that is exactly what we do at Passover.

One would think that after seven plagues, both sides would be highly motivated to resolve this situation. Negotiation is, after all, a matter that is directly related to how motivated each side is to reach an agreement. If I do not need to sign the contract with you, then I may drag my feet or make myself unavailable or simply say no. But if you are the only one who can keep my business going or get me what I want or whatever it might be, then I am going to be much more likely to make sure that, before you leave the building, I have your ‘John Hancock’ on the piece of paper. In our situation here, the Israelites want to leave slavery to worship their God and the Egyptians want the plagues to stop. It would seem that both sides are really, really, really motivated to negotiate in earnest, all night if necessary.

Instead, after Moses reports God’s message to the Egyptians, he immediately leaves Pharaoh’s palace without even attempting to listen to Pharaoh’s response. That is not the behavior of a motivated negotiator, but rather the strategic maneuvering of someone who is more interested in the long-game. Even more astounding, the Egyptians in the palace object in front of the Pharaoh, telling him that, for everyone’s benefit, the Pharaoh needs to let the Israelites go. And yet, there will be three more plagues before the logjam is broken and the Children of Israel are released from bondage in Egypt.

The eighth plague is a great swarm of locusts that will so cover the earth that people will not be able to see the ground. But first, there is another attempt at negotiations. Pharaoh appears to agree to let the Israelites leave Egypt, at least temporarily, for a religious retreat. “Go, serve Adonai your God.” That looks like a basis for agreement. Pharaoh, however, wants to know who is going to participate in this religious retreat. Moses tells him that everybody is going to go, and they are going to take everything with them. If Pharaoh had indeed been ready to consider some sort of compromise proposal, this is not it. He realized that if the Israelites leave with their children and their cattle, they are not likely to voluntarily return. It is at this point that God tells Moses, “Extend your hand over the land of Egypt for the locusts.” The locusts came and consumed all of the vegetation – anything green that had remained on the trees after the plague of hail was now eaten by these locusts.

What is not frequently recognized is that, in addition to eating all the vegetation, the massive swarms of locusts darkened the whole of the land. Pharaoh calls back Moses and Aaron and admits to them that he has done wrong, explicitly apologizing for his earlier behavior. Nevertheless, God continues to harden Pharaoh’s heart and the Children of Israel are still not sent forth out of the land of Egypt. So God then says to Moses, “Stretch out your hands to the heavens and let there be darkness over the land of Egypt.” This ninth plague constitutes a liminal period between the eighth plague, the swarms of locusts who darkened the skies and consumed all living vegetation, and the tenth plague, that of the death of the firstborn.

It seems a rather bizarre plague. What made it so terrible that it should be placed as the ninth plague, the one immediately prior to the death of the firstborn? Perhaps the answer is not to be found in any concrete damage that the plague of darkness might have caused but rather in its psychological impact. This was not the darkness that we might experience on the streets of Greenwich Village at midnight, when it might be dark but you can still kind of see enough to avoid bumping into cars, even if there is no streetlight in front of you. Rather, this darkness was thick and palpable, not just symbolically but actually, so that it could actually be touched (Exodus 10:21). It was sort of like being in a house on fire, where the smoke gets so thick that even if you have an oxygen mask on, it feels like it’s pushing against you and preventing you from moving.

With such a concrete form of darkness, people literally could not move. Even if they eventually found their way to a chair or bed, they needed to stay there. They were fortunate that it was probably the shortest, if not the shortest, plague – they would have died if it had gone on much longer. Although there seemed to be no direct threat to their existence, this heavy, enveloping darkness put a complete end to the functioning of civic society. If individuals cannot get anywhere, then cooperation stops completely, totally, absolutely.

But maybe I am understating the physical manifestations of this darkness. It could have been a sandstorm which generated so much sand that it entirely obliterated all light. Not only did it obliterate light but it filled the air with that same sand, stopping people from moving, making it difficult to breathe. So the physical discomfort would have been enormous and the emotional fright would have been almost unbearable. If I was in such a dire situation, at least if I could see my family and friends, hold them, commiserate with them, and hopefully reassure each other, this would provide a certain degree of solace. But the plague of darkness was so overwhelming and constituted such a complete attack that each person found themselves isolated. Isolated they were at their most vulnerable moment. The shear terror must have been horrifying.

We started this dvar torah by mentioning that God announced that this was a way to demonstrate divine power. But God is not an egotist. Adonai does not suffer from narcissistic personality disorder. So what was the purpose of showing God’s omnipotence? It is possible that the goal was not so much to terrify the Egyptians into submission, but to demonstrate that the Egyptian sun god, Ra, was ineffectual. All forms of life were believed to have been created by Ra, who had called each of them into existence by speaking their secret names. In a land like Egypt where the sun was a dominant force, it was easy to see Ra as the ruler of everything. Now, suddenly, Ra was completely disempowered. Unfortunately, from the Egyptian point of view, it became all too clear that Ra did not have the ability to protect the people of Egypt and had been an illusion all along. Seen from this perspective, this plague, and perhaps all of the plagues, are a demonstration of the theological supremacy of Judaism over that of the Egyptian deities.

About the Author
Dana Evan Kaplan is a Rabbi, scholar, writer, speaker, and organizational consultant. He is the author of A Life of Meaning: Embracing Reform Judaism's Sacred Path (CCAR Press), The New Reform Judaism (Jewish Publication Society), as well as Contemporary American Judaism: Transformation and Renewal (Columbia University Press), The Cambridge Companion to American Judaism (Cambridge University Press), American Reform Judaism: An Introduction (Rutgers University Press), Platforms and Prayer Books (Rowman and Littlefield), and Contemporary Debates in American Reform Judaism (Routledge). Kaplan has been and continues to be active in various programs, think tanks, and conferences to understand the history and theology of Reform Judaism and to discuss ways to make Judaism a vibrant religious form of spirituality for the twenty-first century. Along with his time as a rabbi, Kaplan has lectured in many diverse locations around the world. In his free time he has enjoyed adventurous activities such as scuba diving in Cozumel, Mexico, hiking around the Annapurna mountain range in Nepal, biking in Kerala, India, and climbing Blue Mountain Peak in Jamaica.
Related Topics
Related Posts
Comments