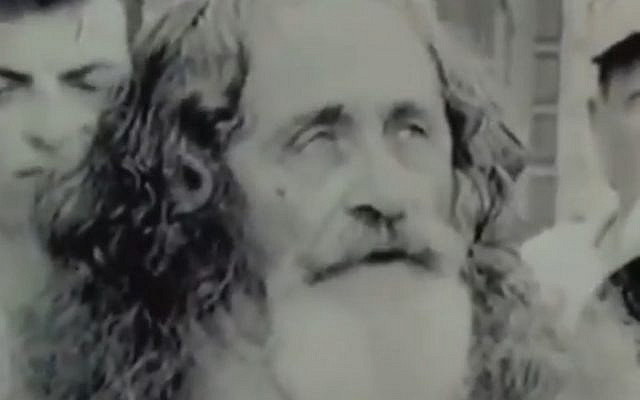 Joseph “Yosselle” Greenstein stood only 1.63 meters (5’ 4”) tall and weighed only 63 kilograms (140 pounds). He had married his childhood sweetheart, Leah, they had 10 children, and they had eventually moved to New York. But he was anything but the stereotypical New York Jew.

For one thing, Greenstein had long, untamed, Samson-like hair. But what really set him apart from the average Jew were the feats he could perform.

Ed Spielman, who wrote an entire book about Greenstein, described the first time he saw him performing on stage in the 1970s:

The crowd watched in silence as he bent horseshoes with his bare hands and bars of steel across the bridge of his nose, exploded chains with the expansion of his chest, and drove spikes through planks w metal-covered wood with nothing more than the power of his palm. Then the crowd came to its feet, and with good reason. This man was 82-years old.

By this point, Greenstein was better known as “The Mighty Atom” because of his tiny stature. He had been performing feats of strength since the days of vaudeville, in the 1920s. He was featured many times on Ripley’s Believe It Or Not and was in the 1976 Guinness Book of Records.

He was billed as “The World’s Biggest Little Man,” “The Modern Samson” and “The World’s Strongest Haired Man” — because he could pull a train of cars attached to his hair, and even held back an airplane trying to take off using just his hair (he did that only twice). Greenstein could twist steel bars around his arm like tefillin, straighten horseshoes, bite penny coins in half and snap chains by expanding his chest. And he did these feats with a Magen David proudly displayed on his shirt.

Greenstein was born on July 15, 1893 in Suvalk, Poland. He was born prematurely, weighing only 1.5 kilograms (3.5 pounds) and doctors did not think he would survive. But he did. Then, as a teenager, suffering from either asthma or tuberculosis (the diagnosis was unclear) a team of doctors predicted he would not live long. In response, he ran away and joined the Issakoff Brothers’ Circus.

One day, some of the hands were picking on the small Jewish kid, when the Russian strongman “Champion Volanko” rescued him. Greenstein became Volanko’s personal valet, and in exchange the muscle man shared with him his training routine and special diet. Volanko eventually revealed that he too was Jewish.

Greenstein stayed with the circus for 18 months, touring as far away as India, where he trained under the greatest wrestlers in the world. He also learned from Volanko that the mind, body and spirit worked as a whole. He would tell him, “Yosselle, before you begin a task, you must first succeed… up here… mind and spirit… then action.”

After returning from the touring circus, Greenstein married Leah. In 1911, the couple moved to America – according to some stories, after Greenstein had killed a drunken soldier.

Like many Eastern European Jewish immigrants who were made unwelcome by their brethren in New York, the new arrivals moved to Galveston, Texas. There, Greenstein worked on the docks. The other stevedores were shocked that such a tiny Jewish man could load and unload cargo faster and better than anyone else. 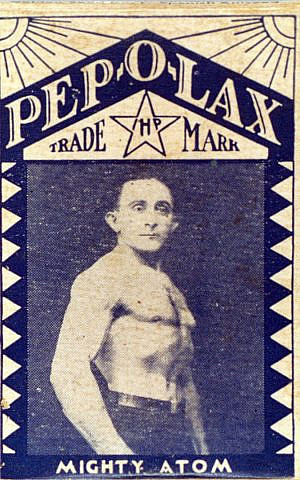 In 1913, Greenstein had his first professional wrestling match, fighting as “Kid Greenstein.” After 30 minutes in the ring with 120-kilogram (270-pound) Wladek Zbyszko, he won $50.

A year later, he fought against George Bothner, the lightweight world champion, in a match that lasted two hours and 47 minutes. The judges declared it a draw.

In 1915, his career, and life, nearly came to an end, when he was shot in the forehead with a .38 caliber pistol by a crazy neighbor standing only 30 feet away. Greenstein put his thumb in the wound to staunch the blood, and took himself to hospital in Houston. The surgeon found that the bullet had been flattened “like a nickel” and gave it to Greenstein as a souvenir. The strongman was discharged from hospital the same day.

Later, The Mighty Atom told his wife how being shot had changed his life:

I was on the ground. I knew I was shot… a burning pain between my eyes… and then somehow I wasn’t myself… but something much more… And I knew in that instant that I wouldn’t die. Couldn’t. Not even a bullet between the eyes could kill me. It has all been for a reason, Leah. Everything. Volanko… the bullet… everything. All for a purpose.

After at least one confrontation with the KKK, the family moved to New York, where Greenstein became a regular on the carnival and vaudeville circuit.

Greenstein told Spielman the secret of bending a steel spike.

Why have I failed to bend this? I know I am stronger than a piece of metal, yet raw strength always fails. I can feel that I’m not using everything I’ve got… The mind holds back. Something within, an instinct for preservation shuts down the system… A life and death situation clears the mind of self-imposed limits… But if man has the capacity to do these things, why does he need an outside stimulus, a danger to make him react? Why couldn’t the motivation come from within?… I will bend it now. My mind will command my body. The spike will give way…

After the end of vaudeville, when it was harder to make money performing feats of strength, Greenstein toured the country, lecturing on the importance of good diet and exercise. He would sell health products at fairs and markets, and later by mail order from his apartment in Brooklyn.

His final performance was on May 11, 1977 in Madison Square Garden. After performing his traditional feats of strength, he took a moment to wish happy first birthday to his great-grandchild.

Greenstein passed away from cancer on October 8, 1977. He was 84 years old. According to the obituary in the New York Times, he was survived by four daughters, four sons, 24 grandchildren and 24 great-grandchildren.

The thing about Greenstein is that no matter how strong he was, or how famous he became, he always remembered his roots as a little kid getting beaten up by anti-Semites in Poland. The following story illustrates how committed he was to always doing the right thing.

In 1933, Greenstein passed a building in New York that was about to host a Nazi rally:

One sign high on the wall read ‘No Jews or Dogs Allowed.’ Yosselle Greenstein had left that garbage behind in the old country. He wasn’t about to tolerate it here.

He bought a ladder and climbed up and tore the thing down. Twenty men streamed out of the building, bent on beating the man into giblets. When it was over, eighteen had been sent to the hospital.

A few weeks later, the combatants were in court. Eighteen in the plaintiff’s dock, and one small defendant. The judge asked Greenstein about the fight.

‘It wasn’t a fight,’ he said, ‘It was a pleasure.’ The case was dismissed.

This week’s Torah portion, Devarim, marks a transition from a nomadic desert people to a nation about to enter the Land of Israel. In just a single generation, the Israelites went from being a weak, leaderless group of slaves to becoming the strongest power in the region.

Moses speaks to the nation and reminds them of where they have come from and where they are going to.

He begins by telling them how far they have come in such a short time (Deuteronomy 1:3-4):

And it was, in the fortieth year, in the eleventh month on the first of the month, Moses spoke to the Children of Israel according to all that God had commanded him regarding them. After he had destroyed Sihon, King of the Emorites, who dwelt in Heshbon, and Og, King of Bashan, who dwelt in Ashtaroth at Edrei.

But Moses reminds them of the laws their parents received at Mount Sinai a short while earlier. And how they had gone from a small group to an enormous population – too much for single person to lead (Deuteronomy 1:9-12):

I spoke to you at that time saying, ‘I am unable to bear you alone. The Lord, your God, has increased you, and today you are as numerous as the stars… How can I alone bear your strife, your burden and your arguments?’

The Lord, our God, gave [Sihon] into our hand, and also Og, King of Bashan, and his entire people. We destroyed them until there was not a single survivor. And we conquered all his cities at that time. There was not a town that we did not take from them. Sixty cities, the entire Argob strip, the kingdom of Og in Bashan. All these cities were fortified with high walls, gates, and locks, aside from very many unwalled cities.

Yet at the beginning of the portion, and continuing on for the next several Torah portions, Moses reminded the people not to forget where they came from, not to let their victories and success get to their heads, and to remain faithful to their values (Deuteronomy 1:26-32).

In Deuteronomy chapter 5, Moses reviews with them the Ten Commandments, and explains that they were only victorious because they observed those commandments.

You are standing with me here, and I will tell you all the commandments statutes and laws so that you will teach them, and do them in the land which I am giving you to possess. You shall observe them, as the Lord, your God commanded you, do not stray right or left… in ordert hat you shall live and it will be good for you, and you shall have long days in the land which you will possess.

The Mighty Atom, the Strongest-Haired Man in the World,  always acted to help and defend others, as if he was still Greenstein the bullied Jew.

Similarly, Moses pleaded with the Israelites that even when they are dwelling securely as a regional superpower, they must remember to act correctly, and realize that they are still dependent on God for their success and prosperity. That prosperity could be taken from them if they forget who they once were and who they are supposed to be.

With thanks to Nate DiMeo and The Memory Palace for first telling me about The Mighty Atom.