Weaving is a very complex operation. Threads (warp) are stretched across a wooden frame, and a shuttle with a second thread (weft) is run back and forth above and below the warp to make a fabric. By running the weft above or below certain threads of the warp it is possible to make quite complex patterns and alter the texture, color and design.

In last week’s Torah reading we learned of the woven fabric that was needed for the covering of the Mishkan (Tabernacle). The Talmud says that the material was woven with such skill that it had lions on one side and angels on the other side.

Thousands of years later intricate patterns were woven into the fabric on looms in which individual threads were raised and lowered by a “drawboy” who assisted the weaver. This was slow and complicated work.

In 1725, Basile Bouchon took the first step in automating the process by inventing a machine that used perforated paper tape to raise and lower the threads, allowing more complex patterns to be woven. His tape operated in a similar way to a piano roll, where needles detected the holes and raised or lowered each thread accordingly. 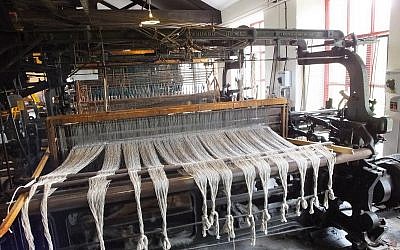 The next development in automated weaving was invented by Jacques de Vaucanson in 1740. De Vaucanson was a French inventor best known for building automata, which became very popular in the 18th century. In 1724 he made androids that served dinner to visiting politicians and cleared up afterwards. However, one government official declared the robots “profane” and ordered his workshop destroyed.

Perhaps his most famous invention was the mechanical digesting duck which appeared to eat kernels of grain and then defecate the waste matter. Although the duck did not actually digest the food (it had a store of pellets inside which it expelled after feeding) it did have over 400 moving parts just in each wing, and it was de Vaucanson’s hope that it would inspire future machines that could actually eat and digest. (His wish was fulfilled in 2006 when Belgian artist Wim Delvoye unveiled his “Cloaca Machine”).

The next and most influential stage in the development of the automated loom was in 1804, when Joseph Marie Jacquard decided to replace Bouchon’s paper tape with punch cards. He realized that most woven patterns repeated, so he strung together a series of cards in a loop which would feed through the loom continuously. For the woven portrait of Jacquard (at the top of this article) 24,000 punched cards were used. 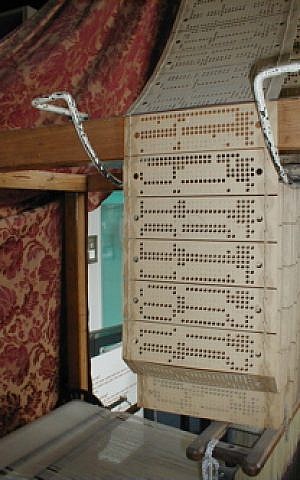 Punched cards in use in a Jacquard loom. (Public Domain. Wikimedia Commons)

But the most ambitious project was a 58-page prayer book woven out of silk which required an estimated 200,000 to 500,000 punch cards.

Those of you older than a certain age may recognize Jacquard’s punch cards from early computers. In fact, Charles Babbage, who designed the differential engine and the analytical engine — considered the earliest precursors of modern computers — had a silk-woven portrait of Jacquard hanging on his wall. Ada Lovelace, who corresponded with Babbage while he was devising his machines, wrote, “We may say most aptly that the Analytical Engine weaves algebraical patterns just as the Jacquard loom weaves flowers and leaves.”

Herman Hollerith later took the idea of Jacquard’s punch cards and used them to tabulate the data from the 1890 US census, which counted 62,979,766 people living in the 44 states of the Union.

The electronic counting was essential to speed up the tabulation of census data. The count for the 1880 census, with 12 million fewer people, had only been completed in 1888.

So successful was Hollerith’s machine, that preliminary census results were announced after only six weeks (although the full count took six years). Hollerith realized the power of his machine, and in 1896 he started the Tabulating Machine Company. In 1911 this company merged with three other companies to make the Computing-Tabulating-Recording Company (CTR); renamed in 1924 as the International Business Machines Corporation — thsi was the birth of IBM. 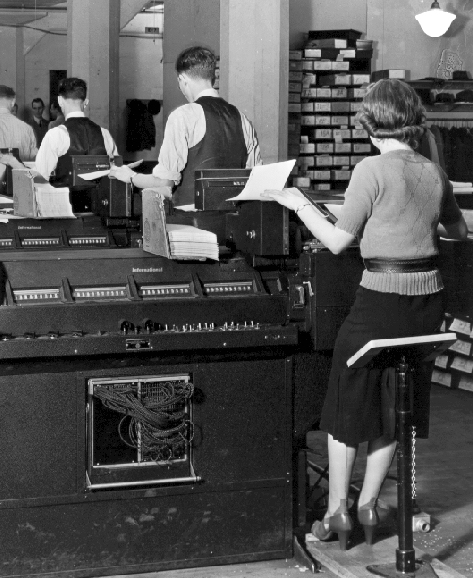 So the loom inspired the tabulating machine, which developed into the computer which allows you to read this blog post.

I find it interesting, though coincidental, that the Torah portion about the census follows immediately after the portion describing the items required for weaving the Tabernacle and the priestly garments.

The Egyptian society from which they had left as slaves did not start to use coins as currency until the fifth century BCE, some 700 years after the Israelites left. In fact, no other culture was using metal coins at that time in history. The earliest metal coins that we know of were made by King Alyattes, who ruled in Lydia (modern western Turkey) from c.591–c.560 BCE.

Even though other Middle Eastern cultures at that time used the term shekel, for example The Code of Hamurabi, it invariably referred to weight (usually of silver) rather than a coin. In Hebrew, the word “shekel” is from the same root as the word “mishkal” meaning “weight.”

The Torah also uses “shekel” to refer to weight. When Abraham bought the Cave of the Patriarchs to bury his wife the verse states, “Abraham weighed out to Efron the silver that he had spoken of in the ears of the Children of Het, 400 shekels of silver,” (Genesis 23:16).

Also in this week’s Torah reading the term “shekel” may be referring to weight. The verse states that every man aged 20 and upwards had to bring half of a holy silver shekels weighing 20 gerahs.

But, the Talmud tells us that God told Moses to use coins to count the Israelites. Unsurprisingly for one raised in a culture without coins, Moses had no idea what the shekel coins were supposed to look like. So, the Talmud (Jerusalem Talmud, Shekalim 1:4) teaches that God showed him.

“Rabbi Meir said: The Holy One, blessed is He, took out something like a coin of fire from beneath the Throne of Glory and showed it to Moses. He said to him, ‘this is what they should give.’”

Not only did God need to show Moses what a coin looked like but according to Tosefot (Menachot 29a), it was even more difficult for Moses to grasp the idea of coins than the three other items that God has to show Moses – the menorah, the new moon and certain impure animals.

“Why did the Talmud not also list the half shekel?… Because the term ‘difficult’ is not appropriate in that case because he would not have known anything about it at all if God wouldn’t have shown him.“

By the time of the Second Temple coins were part of society and the Mishna and Talmud took them for granted. But when the Jews were in the desert and gave the original half shekel the concept of a coin suggested by the Talmud was as new and unlikely as a pooping duck or an IBM computer.