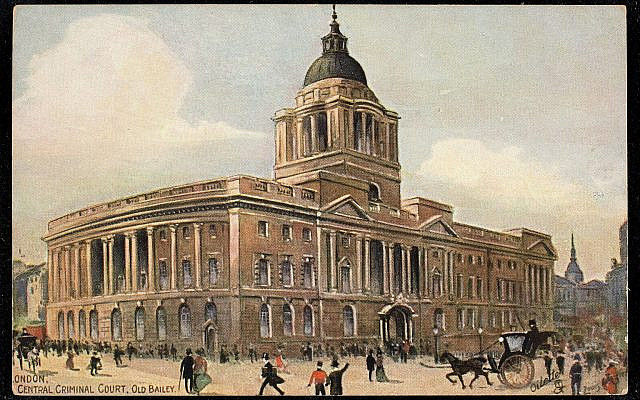 The Old Bailey was once London’s foremost criminal court. It is built on the site of the 12th century Newgate Prison, though the dungeon-like cells were built earlier and were part of the defensive wall around the Roman city of Londinium. The court was built some time before 1585 with an endowment provided by London Lord Mayor Richard Wittington – the real-life inspiration for the folk tale of Dick Wittington and his cat.

Until 1868, executions were held publicly, outside in the street. They were often well attended by the public. Reportedly the best place to witness the executions was from The Magpie and Stump pub across the road (the pub is still there but doesn’t offer such gruesome entertainment nowadays).

Sometimes there were so many people that the killings became fatal for spectators too. For example, on February 22, 1807, an estimated 40,000 spectators gathered to witness the execution of John Holloway, who, along with Owen Haggerty had been convicted of the brutal murder of John Cole Steele. The throng grew so great that dozens of people were crushed and killed in the jostling and pushing.

In the 19th century, the death penalty was reserved for murderers or other violent criminals. But two centuries earlier it was not like that.

For example, on September 26, 1603, Nicholas Garnysh was convicted of grand larceny and sentenced to hang. In total, he had stolen nine sheep. 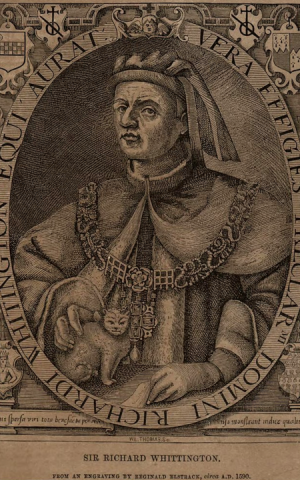 On the same day, George Cocke was hanged, having been convicted of burgling the house of Thomas Cartwright and stealing a five-shilling hat and 15 shillings in cash.

It seems that the 17th century was a tough time to be a thief in London.

By the first half of the 18th century, however, judges were handing out different sentences for non-violent crimes like theft – branding. At the end of the trial, the convicted criminal would be branded with a letter on his thumb – M for manslaughter, T for theft or F for felony (from 1699 to 1707 the convicts were branded on the cheek, but this was considered too harsh, and the courts reverted to branding on the thumb.)

Ralph Mitchell, Henry Whitesides, and Thomas Marshall were all convicted of burglary in the 1730s, but instead of hanging for their crimes, they were branded.

But changes were afoot during the 18th century. Sentencing guidelines gradually changed. Not because the judges had become more lenient or felt that hanging or branding were not controlling the city’s crime. Rather, Britain had acquired foreign colonies which needed populating. Who better to send to Canada, America or Australia than petty criminals? So, the Transportation Act was introduced in late 1717.

According to Sir William Thomson, who had introduced the Transportation Act:

The intent of the law being to prevent their doing further mischiefs which they generally do if in their power by being at large…those who merit transportation are bad subjects, and if allowed scope, might easily injure society.

In many ways deporting petty criminals to the colonies was an even worse punishment than branding. Separated from their families and any chance of earning an honest livelihood, many of the convicts died on the ships during the journey, and many, many more died soon after arriving. But they were all bad dudes, so the judges and politicians felt it was justified.

But the British courts continued exiling felons to Australia – a penal colony was established in New South Wales in 1785. It would remain in use until 1868.

One of those sent to Australia was Joseph Samuel, who was convicted of theft in England in 1795, and in 1801 sent to Sydney. He managed to escape from the guarded colony, and, with accomplices, burgled the home of a wealthy woman. During the crime, a policeman, Joseph Luker, was killed.

Samuel was arrested soon afterward. He was identified by an eyewitness and admitted to theft but denied being the murderer. None of the other members of the gang were caught, so Samuel was sentenced to death.

On September 26, 1803, Samuel had the noose placed around his neck, and the cart holding him drove away, so that he would die of slow strangulation. But the rope snapped, and he fell to the ground, spraining his ankle. The executioners took another rope, placed it around his neck, and drove off the cart. But this time the noose slipped off his neck and Samuel fell to the ground again. A third time the rope was placed around Samuel’s neck and the cart drove off. But once again, the rope snapped and the thief landed on the ground, trying to stay off his sprained ankle. At this point the crowd was actively calling for Samuel to be freed. The governor decided it was a Divine sign that Samuel should not be killed and set him free. 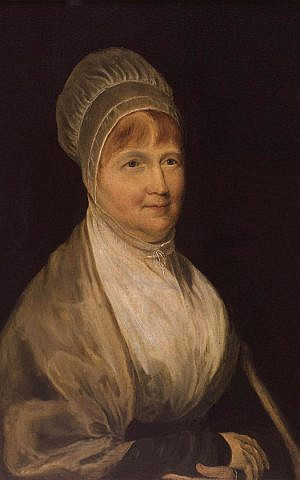 Gradually, as transportation became less feasible, and with a growing awareness of human rights, the prison system was reformed.

In 1813, Elizabeth Fry visited Newgate prison. She was so horrified by the conditions there that she began advocating for changes in the entire system. She gained support from Queen Victoria, and gradually, partly as a result of her petitions, conditions for prisoners began to improve.

In the 200 years since then, the focus of prisons has shifted from punishment to rehabilitation, education and correction. Fewer people were imprisoned as the number of crimes punishable by jail decreased. Efforts were made to enable them to transition back into society once they were released from prison.

Life for prisoners is still tough, but a huge improvement on how things stood a couple of centuries ago.

In this week’s Torah portion, Mishpatim, which deals primarily with societal laws, negligence and criminal acts, we also find sentencing guidelines (though they are binding commandments, rather than recommendations).

Exodus 21 and 22 list several different types of punishment for different kinds of thief.
If someone stealthily takes property, he must repay double what he stole (Exodus 22:3 and 6). If he steals a sheep and sells it or slaughters it, he must pay back four times the value of the sheep (Exodus 21: 37). And if he steals and then slaughters or sells an ox, he must repay five times its value (ibid.).

In all these cases, if the thief cannot afford to pay his fine, he is sold as a slave, and must work for the value of what he owes.

An interesting and unique case is a thief who breaks into a home at night. The Torah assumes that the homeowner is prepared to defend his house and property even if he must kill the thief to do so. And therefore, when he enters, the thief knows he is risking his life.

And because this burglar risked his life, it is considered as if he had been sentenced to death. And since the death penalty is the greater punishment, he is exempt from paying any monetary fine for his crime. Of course, this does not apply if the homeowner could defend himself without potentially killing the thief. All this is alluded to in verses one and two of Exodus 22.

The one case of theft not mentioned in this week’s Torah portion is that of a mugger or highwayman, who brazenly takes money in broad daylight. This robber must simply return the item he has stolen, or its value. This law is listed in Leviticus 5:13.

Unlike the British justice system, there was never a Jewish legal concept of exiling convicts or putting them behind bars. Execution was reserved for the most serious crimes, and even then, it was only very rarely administered. The Mishna (Makkot 1:10) records the opinion of the second-century Rabbi Eliezer ben Azariah, a court that executes one person in 70 years is considered bloodthirsty. And even then he was speaking theoretically, because the court had not put anyone to death for well over 100 years – since before the destruction of the Second Temple.

The rabbis who ran the legal system supplemented the Torah laws with other societal decrees intended to keep the population safe. However, in most cases, either willingly or not, Jewish society handed over responsibility for dealing with criminals to the secular courts in whichever countries they dwelt.

By the time of the Geonim, who flourished from the 7th to the 10th century, the rabbis and Jewish courts were curtailed in the types of cases they could try and the punishments they could impose.

The rabbis recognized (or were forced to accept) that they did not have the resources to investigate crimes properly, or to enforce punishments – whether of Torah or rabbinic origin — on miscreants. Although the rabbis didn’t make fundamental changes to the law books, in practice they developed an entirely new system of dealing with Jewish criminals in a non-Jewish society.

Perhaps there are those who long for a future era with a return to the biblical laws and punishments for crimes. When muggers must only return what they stole and when burglars get off scot-free, because they had risked their lives to steal.

But it is also possible that just as British sentencing guidelines have changed drastically in the past 400 years, so too rabbinic and Jewish punishments can evolve to match the latest understandings of crime, rehabilitation and human rights.