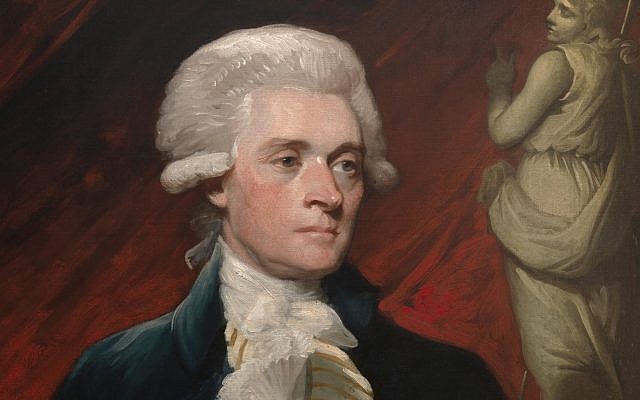 Portrait of Thomas Jefferson while in London in 1786 by Mather Brown. (Public Domain/ Wikimedia Commons)

Thomas Jefferson was the primary author of the US Declaration of Independence and served as the third president of the new nation from 1801-1809. In addition to being a politician, he was (among other things) a lawyer, a plantation owner, a philologist, an architect, a historian, a philosopher (who served as president of the American Philosophical Society), an author and the founder of the University of Virginia.

We must also remember that by modern standards he was a racist. He was also a slave owner, despite writing in his book, “Notes on the State of Virginia” that, “There must doubtless be an unhappy influence on the manners of our people produced by the existence of slavery among us. The whole commerce between master and slave is a perpetual exercise of the most boisterous passions, the most unremitting despotism on the one part, and degrading submissions on the other.” After the death of his wife Martha, Jefferson went on to father at least six children with one of his slaves, Sally Hemings. 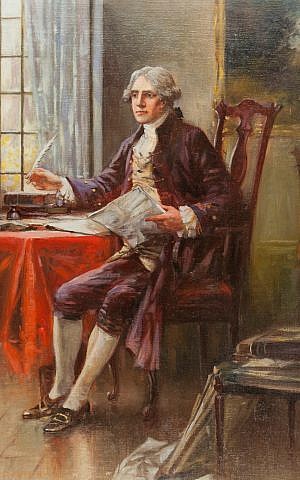 Another trait of Jefferson’s was his obsession with measuring almost everything.

In 1790 he even submitted a paper to Congress entitled, “Plan for Establishing Uniformity in the Coinage, Weights, and Measures of the United States” which proposed the world’s first decimal system of weights and measures.

He took meticulous records of almost everything he could. For example, his diary entry for February 8, 1775 reads:

If a pipe of Madeira yeilds 30 doz. bottles, we drink it at 7. years old for 3/ a bottle, which includes the 7. years interest. Such a bottle holds 15 common wine glasses. A flask of Syracuse holds about 7¾ common wine glasses call them 7½ because of the extraordinary sediment. To drink it then as cheap as the best Madeira it should be 18d. currcy. the flask. To be as cheap as new Madeira it should be but 10d the flask, or £6–0 the gross.

To make all his precise measurements he needed to carry an assortment of measuring tools with him. Here is another diary entry listing his expenses for March 21, 1786. which shows his purchase of several measuring devices:

I wish I could tell you more about the learned pig but all I can see is that it seems like a good price to pay for admission.*

Many of Jefferson’s tools were pocket-sized so he could carry them with him at all times. And to carry the pocket-sized tools he needed lots of pockets in his clothes. The Thomas Jefferson Foundation at Monticello website writes of him:

Jefferson tended to dress simply. He liked to keep his pockets filled with all sorts of odds and ends including “… scales, drawing instruments, a thermometer, a surveying compass, a level, and even a globe,” along with a small ivory notebook and a pencil to record his observations and measurements…. In his pockets, Jefferson carried such a variety of portable instruments for making observations and measurements that he’s been dubbed a “traveling calculator.”

Wherever he was, Jefferson would be able to reach into one of his many pockets and pull out the right tool for taking a measurement. According to his granddaughter, his clothes were “simple and adapted to his ideas of neatness and comfort.” And his garments contained lots of pockets for storing his many devices.

My wife tells me that nowadays pockets are a hot topic on women’s discussion groups, and are further evidence of sexism, because men’s pockets are usually functional, whereas pockets in female clothing are usually non-existent, purely decorative, or too small to be useful. But that’s not the focus of this blog.

Whyyyyyy? If you aren't going to give women real pockets why do you think we need only one and it needs to be barely deep enough for a quarter? #realpockets pic.twitter.com/mgjpIEQNjN

Along with modern women, the priests who served in the Mishkan and later the Temple also wore clothes without pockets.

This week’s Torah portion describes the weaving and sewing of the priestly garments (Exodus 39:27-29):

The clothing is far more elaborate and beautiful than what one would normally expect to wear for work that mainly involved slaughtering and butchering animals. And the garments notably lacked pockets. 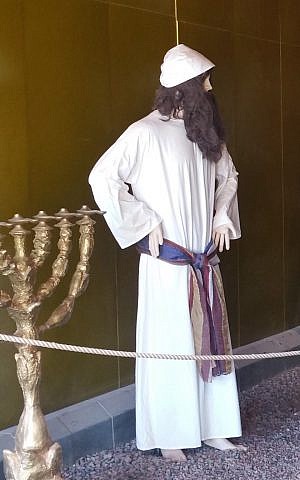 I wonder if this lack of pockets is symbolic of the role of priests as religious leaders of the Jewish world — demonstrating that they could not accept any gifts from the people bringing the sacrifices in order to give them preferential treatment. In fact, the High Priest Eli and all his descendants were punished because his sons helped themselves to the best part of the sacrifice as “payment” for their service (I Samuel 2:12ff).

Similarly, we find in the Mishna (Shekalim 3:2) that when the Temple treasurers went to a special chamber to gather the silver coins which would be used to fund the Temple, they were explicitly banned from wearing any garment in which they could even be suspected of possibly stealing any coins.

Although the regular priests did not have any pockets in their clothes, the High Priest, who wore four extra garments, did wear something that was a bit like a pocket – the choshen or breastplate, which was a piece of folded cloth. The ephod was decorated with jewels on the outside but also had the Urim veTumim which the High Priest used to ask for Divine judgement in certain cases. 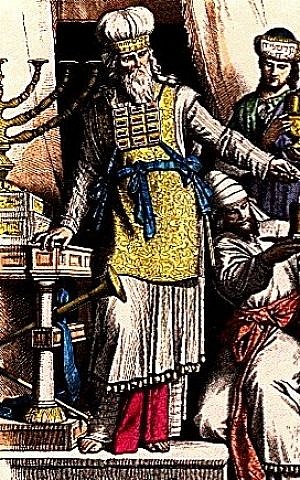 The etymology of the word choshen is unclear, but one suggestion, by the 19th-century German biblical scholar August Dillmann is that it is derived from the Hebrew word chotzen, meaning to fold in half. In other words, the word choshen may actually mean “pocket.”

The Sages of the Talmud never explain precisely what the Urim veTumim were. The words mean “light and perfection” but there is no clear consensus as to whether it was one thing with a double name, two things, or even just a general name for the ephod itself (see Rambam Hilkhot Klei Hamikdash 10:10).

So according to those medieval commentaries, the only pocket worn by anyone serving in the Mishkan or Temple contained the Divine Name. The message seems clear. The leaders of the Jewish community must not line their pockets with gifts or silver or even a nice piece of meat. They must carry with them instead the desire to do what is right and just, as symbolized by the Divine Name in the ephod.

Let’s close with the final words of the mishna (Shekalim 3:2) that we cited earlier, which show the lengths on must go to in order to fulfil his religious duties not only in the eyes of God but also in the eyes of people: 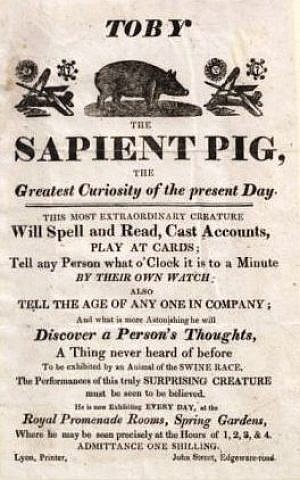 The pig started off as a sensation in London during the 1780s, later touring the UK and Europe (though when the first learned pig died it was replaced by a series of other learned pigs).

According to publicity at the time:

This entertaining and sagacious animal casts accounts by means of Typographical cards, in the same manner as a Printer composes, and by the same method sets down any capital or Surname, reckons the number of People present, tells by evoking on a Gentleman’s Watch in company what is the Hour and Minutes; he likewise tells any Lady’s Thoughts in company, and distinguishes all sorts of colours.

Although Samuel Johnson never saw the pig, he discussed it with James Boswell:

The pigs are a race unjustly calumniated. Pig has, it seems, not been wanting to man, but man to pig. We do not allow time for his education, we kill him at a year old.

In 1798 William Frederick Pinchbeck toured New England with his version of the learned pig, called the “Pig of Knowledge.” Pinchbeck later wrote a pamphlet explaining how he trained the pig.
There is so much more to say about the pig, but I feel I should save some of it for a future blog.