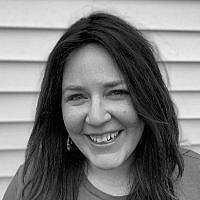 The Blogs
Shoshana Greenwald
Apply for a Blog
Please note that the posts on The Blogs are contributed by third parties. The opinions, facts and any media content in them are presented solely by the authors, and neither The Times of Israel nor its partners assume any responsibility for them. Please contact us in case of abuse. In case of abuse,
Report this post.

This post is written in honor of the yahrzeit of my beloved grandfather, Rabbi Maurice Lamm of blessed memory. A wonderful grandfather, author, speaker and rabbinical leader, Zeida was working on a book before he died, a book that was never finished or published, a book on Faith in G-d.

I remember my first time at Disney World. At 11 years old, I stood outside the Peter Pan ride and panicked. The ride was indoors and entirely opaque from the line. I was assured that it was not a scary ride and that I would enjoy it, but I still wanted to know exactly what would happen in the ride. It wasn’t that I didn’t trust my parents or the Disney employees that reassured me but that in order to prepare myself for a new experience I felt as if I had to know what to expect.

Knowledge, preparation and research both comforts and arms us. It gives us control, even if that control is simply an illusion.

The Jewish people in Parshat Shelach wanted spies to scope out the Land of Canaan. They might have trusted G-d but they also wanted to know what they would likely be up against. So G-d sent one spy from each tribe, important and prominent leaders who would find the answers to a specific set of questions given to them by Moshe. “Send for yourselves men to spy out the Land of Canaan that I am giving to the Children of Israel – one man for each tribe so should send, each one a leader among them” (Bamidbar 13:2).

Many commentators (for example, see Rashi) say that simply requesting to have spies was the sin but G-d both allows it and the parsha’s language is actually phrased as if it is G-d’s directive to have representatives to scope out the area to familiarize the Jewish people with the land that they will conquer and inherit.

The spies returned after forty days, and reported back, not just to Moshe and Aharon but to the entire assembly (Eidat Bnei Yisrael) and showed them the fruit of the land. They reported that the land devours its inhabitants. They spoke about giants that they encountered. The language here, for the Jewish nation, eidah, is used throughout and its meaning is noteworthy. As Rav Joseph B. Soloveitchik notes in his essay “Kol Dodi Dofek” Eidah comes from the root word ed, or witness.

The Jewish people are promised that the land of Canaan will be theirs and that they can rely on G-d. This fight, however, will be different. G-d is granting them agency. As opposed to a sea remarkably splitting, G-d will help, or allow, them to conquer the land. When the Jewish nation asked for spies to scope out the land, perhaps what they were really asking for was agency. Could they be a part of this next chapter? G-d agreed and sent leaders from each tribe to scope out the land.

The Jewish nation and the spies, their leaders, are shifting from the mentality of a people who are enslaved by Egyptians to one that is free; whose allegiance is only to G-d. Not only has the nation witnessed outright miracles on their way to freedom but their every need has been cared for in the desert, whether it is food, water or shelter.

I believe that the request for spies represented a shift in mindset for the Jewish people from an enslaved people to followers of G-d. That shift began when they received the Torah at Har Sinai and recited Naaseh Vnishma – that was the first time they actively participated in their relationship – and continued when they were allowed to send spies into the land.

Why did the spies get intimidated by what they saw and why did the Jewish people panic when they heard the report? Maybe they didn’t doubt G-d’s power but their own.

The testimony given by the spies and received by Eidat Bnei Yisrael rejected G-d and rejected their own self-determination. Despite all the miracles G-d performed, the Jewish people still have a slave mentality and are not yet ready to enter the land which is why G-d is determined to end this people and start a new people from Moshe, their leader, who was never enslaved. Moshe recites the divine attributes of G-d and begs for forgiveness. G-d grants Moshe and the nation forgiveness but also determines that these people; this generation is not ready to enter the land with the notable exceptions of Kaleb ben Yefuna and Yehoshua bin Nun and therefore everyone of age in this generation must die before the Jews are ready to enter Eretz Yisrael.

According to Rav Moshe Feinstein of Blessed memory in Derash Moshe, on the first words of the parsha, “Shelach Lecha Anashim, Send forth men,” (13:2) the lack of faith exhibited by the spies and by most of the nation was because “they did not achieve their faith by working on it, but attained it rather by witnessing the wondrous miracles that Hashem had performed for them. Therefore, their Emunah was limited to what they actually beheld, not more.” (p241)

Apparently, R. Samson Rephael Hirsch, as cited by R. Yonasan David Arenias, in his book, Journey of Faith, believed that the forty years in the desert “would be vital for their development; it would be their ‘schooling in faith.’ By faithfully following the Cloud, eating the manna, and learning Torah directly from Moshe, they would build up their reservoirs of faith to the level required to enter the land” (R’ Hirsch 14:33-34). G-d was both punishing and teaching the entire Eidah how to shift from a mentality of slaves to a mentality of followers of G-d ready to enter the land they were promised, the land of Israel.