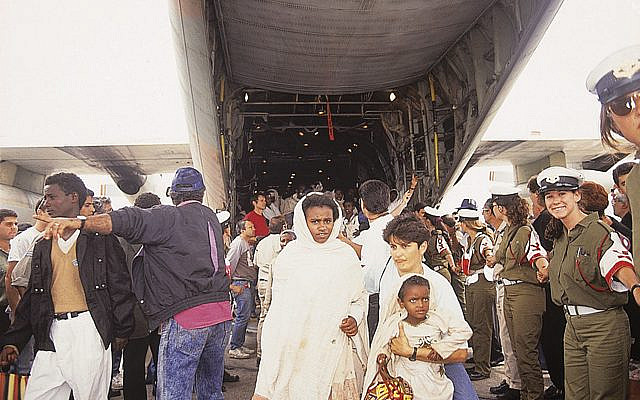 “Fear no one but God. Love every Jew.”

This immortal advice from the Baal Shem Tov’s father informed Israel’s greatest moments, including the breathtaking rescue operation of Ethiopian Jewry 30 years ago that we remember this week.

Conversely, throughout history, ignorance of these basic precepts of Judaism, and focus on personal versus national gain, has led to the greatest mistakes of our leaders, from the bad report of the Spies in this week’s Parasha, to the destruction of Gush Katif in 2005 (both around the 9th of Av) and the discouraging ego-wrestling between our current aspiring prime ministers.

A dearth of this basic love for one’s fellow Jew also led to the utter estrangement from Israel by our “progressive” brothers and sisters, during Hamas’ recent 4000-missile war against Israeli civilians.

And, finally, most distressingly, fear of media backlash and lack of mutual responsibility were at the root of the Israeli Police Force’s recent near-abandonment of Jewish Israelis, as they were brutally attacked by Arab lynch mobs and rioters in cities throughout Israel.

In Parshat Shlach Lecha, ten out of twelve leaders of the tribes of Israel are fearful of the inhabitants of the Land that they spy out, preferring to keep their positions of power over the Jewish People in the desert, and ultimately destroying that generation’s future.

Israel and Jews around the world are famous for assisting other nations in times of need, and improving global quality of life with our caring and ingenuity.

But if we do not have the courage to face our enemies and take care of ourselves, to paraphrase Hillel, then we have learned that no one else will.

I was a new Olah at the time of Operation Solomon, in May 1991 when Israel airlifted 14,300 Ethiopian Jews from civil war and famine, in a complex, covert 36-hour operation involving 35 IAF planes whose seats had been removed, tremendous logistics, and $35 million raised overnight from world Jewry.

This emotional, impressive IDF mission was carried out over Shabbat, because of the impending danger — as saving lives takes precedence over the Sabbath.

But even then, not every Jewish heart fluttered with pride in Israel, for saving thousands of lives.

Operation Solomon brought back for me the words of Leon Weiseltier, editor of the New Republic during Operation Moses in 1984 , when people also accused Israel of “racism,” for rescuing thousands of Ethiopian Jews from civil war, but not their non-Jewish compatriots.

I was a Senior at Barnard then, and paraphrased Weiseltier during a Dvar Torah in Hillel services Friday night: “It is impossible to help everyone,” he had written. “But efforts by many groups to help their own, results in many people being helped.”

Israel’s greatest achievements have been predicated on this dedication to the Jewish People and additionally to Tikkun Olam, combined with unflinching courage in the face of adversity.

To get our country back on track, we must remember the raison dיetre of the State of Israel, which is first and foremost, to save and protect Jewish lives. Clearly, a government that includes pro-terror parties cannot fulfill this mission, nor our other noble national aspirations.

I expect that instead of giving up on our country’s vision for the Jewish People and its other peace-loving citizens, our leaders will act upon Caleb’s eternally relevant words:
“Let us steadfastly arise and inherit it (our Land and Common Destiny and Future), because we surely can!” (Bamidbar 13:30)