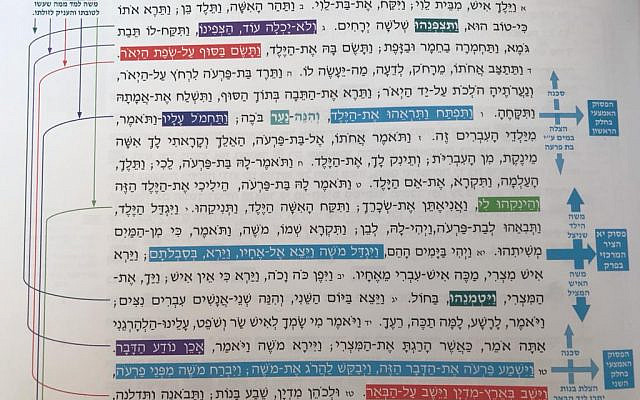 I recently listened to a lecture on “inspiring excellence,” by Fred Kofman, a leadership development advisor at Google and prolific author.  He suggested that a good leader does not create followers, but a community of people interested in achieving the same mission — one that transcends their personal lives.

He gave the example of the janitor that President John F. Kennedy met on his visit to NASA in 1963.    JFK asked him “What is your job, sir?”   And the janitor replied, “My job is to put a man on the moon, Mr. President!”

This week we begin the story of baby Moshe, who is saved and raised by individuals with compassion and vision, and who evolves into the compassionate and visionary leader of an eternal nation.
Even more fascinating – the connection between Moshe’s infant and adult life is expressed visually in the “chiastic”” (pyramidic) structure and key words of Chapter 2, Sefer Shmot.

In his brilliant book “Amudei Hod,”  Rabbi Amihud Glaser illustrates this internal literary structure of the Torah, which elucidates the main messages of each Parasha.

In his presentation of Parshat Shmot — a page of which is photographed above – he color-codes main themes and parallel phrases from the description of Moshe’s growth to adulthood — i.e. his endangered life as a baby and after he kills the Egyptian (his parents’ hide him for three months and he hides the Egyptian in the sand), the daughter of Pharaoh’s compassion towards baby Moshe, and Moshe’s defense of Yitro’s daughters from the shepherds, and many other parallel episodes and expressions.

The main pasuk which divides the segment equally appears in light blue – “And Moshe grew, and went out to his brothers, and saw their suffering.”  The word “see” also repeats itself in many forms, as Rav Amihud illustrates on the following page. Moshe is surrounded by people who perceive reality deeply, and grows to be a person sensitive to other people’s needs.

While this Parsha ends with the nascent Jewish People being even more oppressed and unable to adopt Moshe’s vision of impending freedom, we know that Moshe ultimately inspires an entire new generation to pursue a life of courage and faith in the Land of Israel.

It takes a whole life of humility and personal example, but Moshe leaves us a Torah that, on all its hidden and revealed levels, holds the key to our personal refinement and mission of increasing compassion, justice and faith in the world.

This mission reveals itself through the lens of Moshe’s life story, and continues through the evolving history of our People to the present day.

About the Author
Linda Pardes Friedburg made Aliyah from New Jersey in 1990. She is Founding Director of Shishi Shabbat Yisraeli National Jewish Leadership Initiative for Young Russian-Speaking Israelis, is grateful for her six kids and one Belorussian husband, and still feels the need to pinch herself every time she drives up the hill to Neve Daniel, Gush Etzion, their home since 1994. For her previous Light in the Parsha pieces: https://www.facebook.com/linda.pardesfriedburg
Related Topics
Related Posts
Comments