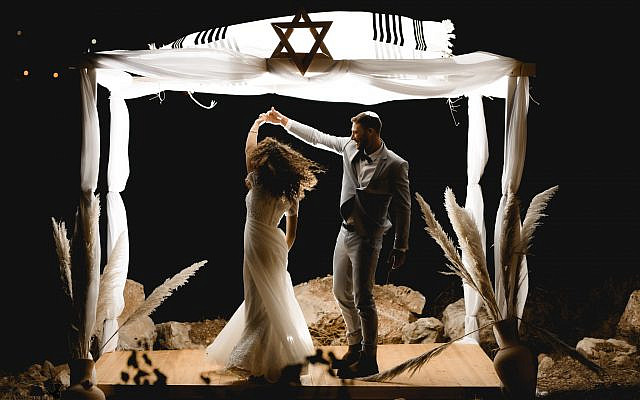 Sarah and Asher's Corona Wedding, Chupah hand-built by the groom and donated to the city of Efrat for future Simchas (Photo: Yochai Samet)

“The Cherubim (K’ruvim) shall have their wings spread upwards, shielding the Ark cover with their wings, with their faces towards one another…and I will speak with you from atop the Ark cover from between the two Cherubim, upon the Ark of the Covenant” (Shemot 25)

God speaks to Moshe from between the Cherubim, as they gaze upon one another.  In our generation, sans Temple and Cherubim, the extent that God dwells among us depends upon our most intimate relationships.

Many metaphors fill our sources about these Cherubim, which hovered above the Ark of the Covenant – the centerpiece of the Tabernacle, containing both the broken and the whole Tablets of the Ten Commandments.

The Cherubim symbolize lovers, “man and woman – if they merit,  Shechinah between them”, the Talmud says. The occasional bumps in our marriages encourage us to keep working on ourselves, to “merit” and treasure the Covenant between us.

They also represent God and the Jewish People, facing one another as we tried to make “His will our will”  (Pirkei Avot) – but turning away from one another, according to the midrash, when the People abandoned morality, Torah, and Kedusha.

But the Talmud also relates that when the Babylonians entered the Temple to destroy it, and all Jerusalem was up in flames, they saw the Cherubim gazing upon one another (Yoma 34).
Even as we suffered horrible consequences,  God was there.  The Covenant was not broken; the relationship could and would be renewed.

Two thousand years later, the tremendous joy that I feel at Jewish weddings in Israel is inspired by this double renewal – of our flourishing Land and our ingathering People.
The bride and groom under the Chupah remind me of the Cherubim; their Ketuba is the Covenant between them. We feel in our hearts God’s loving presence.

The same is true when we make efforts to bring peace into our homes – our miniature Temples – and to bring together new couples in Am Yisrael.

“Make me a Tabernacle” – not only a physical one, of gold, silver, precious fabrics and incense – “and I will dwell among them.” (Shemot 25)