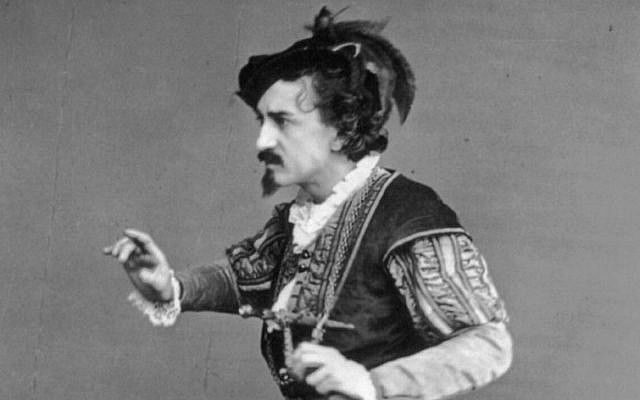 Edwin Booth was perhaps the greatest American Shakespearean actor of all time. His Hamlet is considered the best of the 19th century. He was the son of Junius Brutus Booth, a famous English actor who abandoned his wife and son in 1821 and moved to the USA with his girlfriend Mary Ann Holmes. Junius and Mary had at least 10 illegitimate children together, four of whom died in childhood and three of whom became actors. Edwin was without a doubt the best actor of the family.

In 1849 Booth made his stage debut in Boston, acting alongside his father. A year later he was playing in New York. And in 1851, when his father took ill, Edwin took his place as Richard III. After his father’s death in 1852, the 19-year old Booth toured Australia, Hawaii and and later Europe.

He opened a theater in New York, called the Booth Theater, and began a record-breaking run where he played Hamlet for 100 consecutive nights (the record stood until 1922 when John Barrymore played the part for 101 nights).

Edwin was concerned that the public would quickly tire of too many Booth brothers appearing onstage, so he divided up the country, telling his older brother to perform in the west and his younger brother in the south. He kept for himself the most lucrative East Coast. He was also perhaps embarrassed by his brothers’ lack of talent (they were certainly not as great as he was). 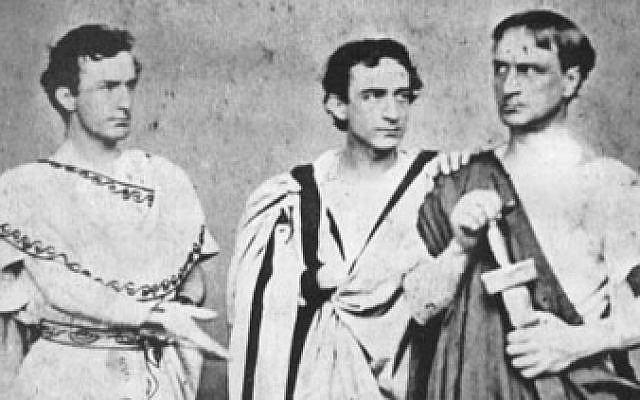 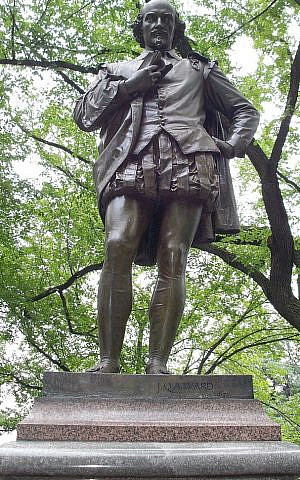 In 1864, he appeared alongside his two brothers for the only time, in a charity performance of Julius Caesar. Edwin played Brutus, after whom his father was named, and the funds raised were used to build a statue of William Shakespeare that you can still see today in Central Park.

In that same year (or perhaps the year earlier), Booth happened to save the life of President Abraham Lincoln’s son Robert Todd. Robert Todd Lincoln described the incident in 1909, in a letter to the editor of The Century Magazine:

There was some crowding, and I happened to be pressed by it against the car body while waiting my turn. In this situation the train began to move, and by the motion I was twisted off my feet, and had dropped somewhat, with feet downward, into the open space, and was personally helpless, when my coat collar was vigorously seized and I was quickly pulled up and out to a secure footing on the platform. Upon turning to thank my rescuer I saw it was Edwin Booth, whose face was of course well known to me, and I expressed my gratitude to him, and in doing so, called him by name.

Edwin Booth also went to Washington DC to give command performances for President and Mrs Lincoln. 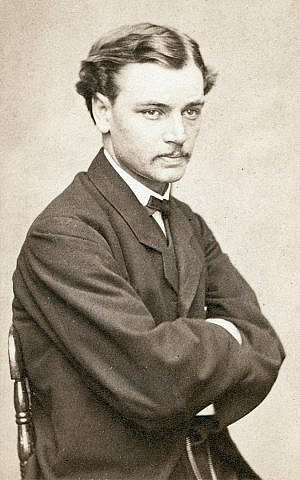 There had been a bitter rivalry between Edwin and his younger brother since they were young. Edwin was jealous that his brother could stay in boarding school while he toured the country with their alcoholic, mercurial father. His younger brother envied Edwin’s talent and brilliance as an actor and his flawless diction, which he himself lacked — reviews of his plays often focused on his mispronunciation of words.

Perhaps because the younger brother lived in the south for so long, they also held opposite views on the president and the future of America. Edwin wrote:

That he was insane on that one point [secession] no one who knew him well can doubt. When I told him that I had voted for Lincoln’s reelection he expressed deep regret, and declared his belief that Lincoln would be made king of America; and this, I believe, drove him beyond the limits of reason.

Nora Titone claimed in her 2010 book My Thoughts Be Bloody that it was this sibling rivalry and jealousy that ultimately drove the younger (and today more famous) brother, John Wilkes Booth, to assassinate Lincoln in the Ford Theater in April 1865. 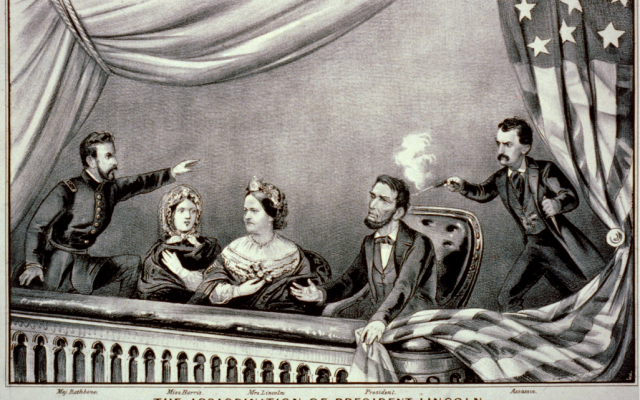 The Talmud (Menachot 109b) describes another sibling rivalry that led to idolatry. On his deathbed, Shimon the Just named his younger son Onias to be his successor as high priest. Shime’i, who was two and a half years older than Onias, was jealous of his brother, and tricked him into performing the service while wearing women’s clothing. The other priests were so furious at this desecration of the Temple, that they wanted to kill Onias. The younger brother and rightful heir fled to Egypt and eventually built a replica of the Jerusalem Temple in Alexandria.

(The Talmud also records another version of the story where it was Onias who was jealous of Shime’i, but the ending is the same).

Josephus alludes to this story when describing the Temple of Onias in Alexandria (Wars of the Jews vii 10 §2-3):

Onias did not do this out of a sober disposition, but had a mind to contend with the Jews at Jerusalem, and could not forget the indignation he had for being banished from there. Accordingly, he thought that by building this temple he should draw away a great number from them to himself. There had also been a certain ancient prediction made by the prophet Isaiah, about 600 years earlier, that this temple should be built by a man that was a Jew in Egypt. And this is the history of the building of that temple.

It was also sibling rivalry that led the biblical brothers to sell Joseph into slavery, starting a chain of events that eventually brought Jacob and his entire family to live in Egypt, and later still led to Pharaoh enslaving the Israelites.

Yet in this week’s Torah reading, Vayechi, the brothers put aside their rivalry and accept their different roles.

First, Jacob blesses his grandchildren, Ephraim and Manasseh, who had been born to Joseph and his wife Asenath (who was Potiphar’s daughter). Joseph is careful to position the two young men either side of Jacob, so that Manasseh, the elder, would receive the greater blessing, from the patriarch’s right hand, and the younger Ephraim, would be blessed by Jacob’s left hand.

Yet, these two sons became the paradigm of brotherly affection. To this day, parents bless their sons, “May God make you like Ephraim and like Manasseh.” 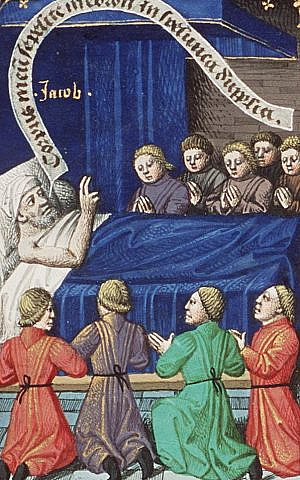 Then, on his deathbed, Jacob gives all 12 of his sons blessings. He begins with the decidedly unfavorable blessings to Reuben, who is described as “Unstable as water” and Simeon and Levi, to whom he says, “Cursed is their anger… I will scatter them among Israel.” But then Jacob goes on to bless Judah that, “Your brothers will praise you… your father’s sons will bow down to you.”

Unlike previously, when Jacob’s favoritism led to sibling rivalry, this time the brothers stand united around their father’s bed.

This may have been the only time in Jewish history that all the tribes were of one mind and one purpose. But it is also the aspiration for which we should all strive.

Each of us has different talents and skills. Some of us will have different roles in life than others. Our brothers and sisters may be more successful, earn greater praise, or even sometimes lead us.

Jealousy between siblings can ultimately destroy a nation, lead to idolatry or kill a president. But accepting our differences and loving one another because of them builds a strength of unity that is unbeatable.